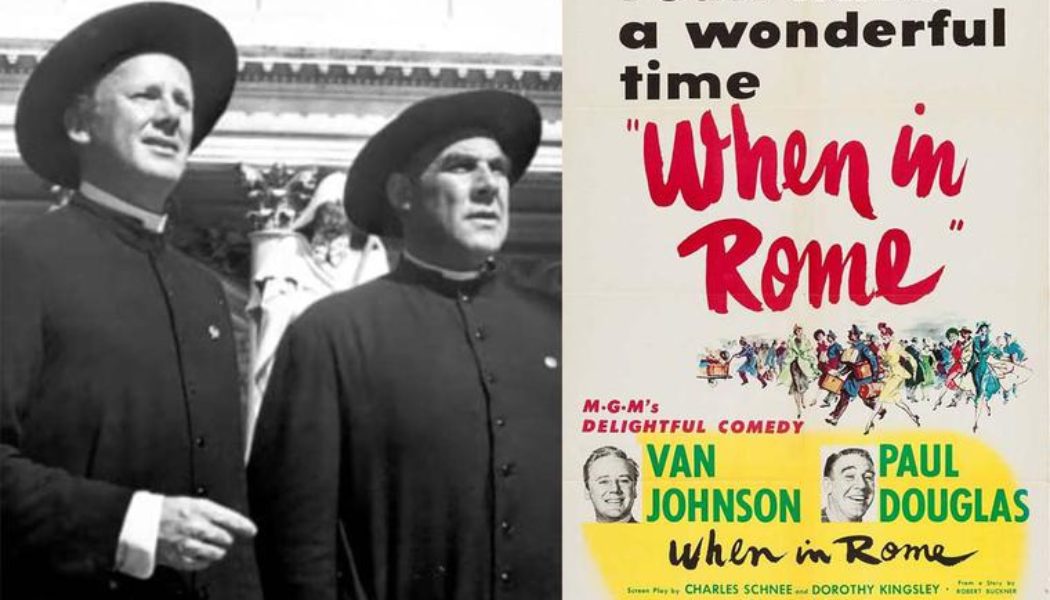 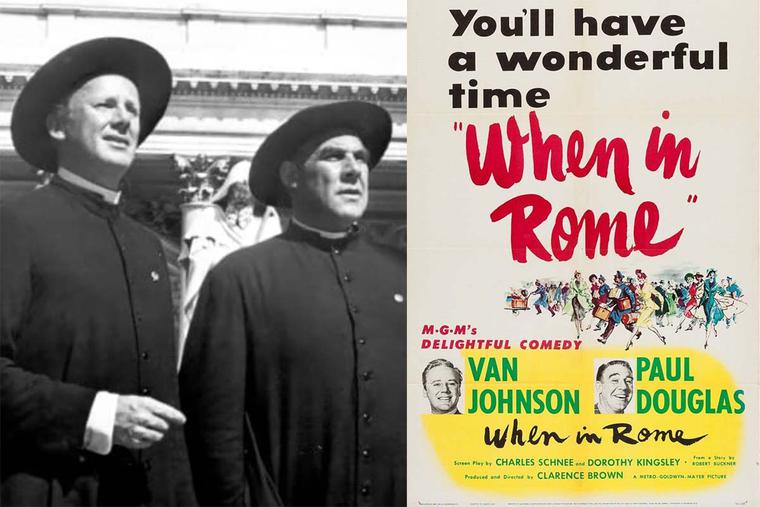 Finding a copy of When in Rome might be difficult, but despite its obscurity it is an absolute must-watch — a black-and-white, low-budget MGM picture centered around the Holy Year of 1950. The film opens with this screen card:

“1950 was a Holy Year. Three million pilgrims from every part of the world thronged to Rome, the Eternal City. Our story is about two men who journeyed to Rome that year. One was Father John X. Halligan, a young priest from Coletown, Pennsylvania, whose mission was a holy one. The other was Joe Brewster, late of Sing Sing, San Quentin, Joliet and Atlanta, whose mission was not so holy. If our story has a moral, it’s a simple one. God may move in mysterious ways, but He gets there just the same.”

An original screenplay not based on previous material, it is at once a comedy of mistaken identity and a drama of moral conversion. Father Halligan meets Joe Brewster on a ship from New York to Genoa. Unbeknownst to Father Halligan, Brewster is a con man on the run from U.S. authorities.

Brewster attempts to elude his pursuers by stealing and donning Father Halligan’s priestly garb. But instead of instantly reporting Brewster to the Italian authorities, Father Halligan allows Brewster to roam free. As Brewster finds himself immersed with the Holy Year pilgrims in Rome, he recalls his own days as a choirboy. Father Halligan even sees Brewster participate in a Eucharistic procession trying to blend in with the crowd; later, they clean the Trevi Fountain together; in the Colosseum, Brewster makes his first confession in 20 years.

The film is less than 80 minutes, yet we see a remarkable character transformation. What follows is a delightful third act that leads to a richly satisfying conclusion. Brewster eventually moves from constantly fleeing and scrambling to survive, to discovering a new goal: to earn the complete indulgence offered to pilgrims attending the Holy Year. Never before or since When in Rome does the antagonist find conversion by pursuing attainment of an indulgence — at least in a mainstream Hollywood picture! Indeed, Jubilaeum Maximum was the 1949 papal bull promulgated by Pope Pius XII stipulating the steps to get the indulgence.

Van Johnson plays Father Halligan and Paul Douglas is Brewster. The picture was produced and directed by reliable MGM helmer Clarence Brown in what proved to be his second-to-last film before retiring. Brown was a master of creating sensitivity while avoiding sentimentality. Consider his previous films that accomplished this trait, such as National Velvet, The Yearling and Angels in the Outfield (with Paul Douglas as the manager of the Pirates), the film Brown directed just before When in Rome.

Nevertheless, despite such talent involved, and using a strong use of the eye-popping locations in Rome during six weeks of on-location production, the film was a box office failure in 1952. Upon the film’s release, Variety noted, “Lack of star potency and a story not strong enough on its own to carry the film.” A year later, Paramount’s Roman Holiday captured the attention of audiences that marketers tried to sell with When in Rome. But the small film’s heart was buried in the MGM vault and we are sorely in need of its rediscovery.

After all, Brewster embodied the essence of Pius XII’s intention for the 1950 Holy Year: penance and prayer that the lapsed return to Christ.

Size. Significant improvements have been made to ways to limit gambling addiction and get help for those who need it the most. What rights you have over your data.