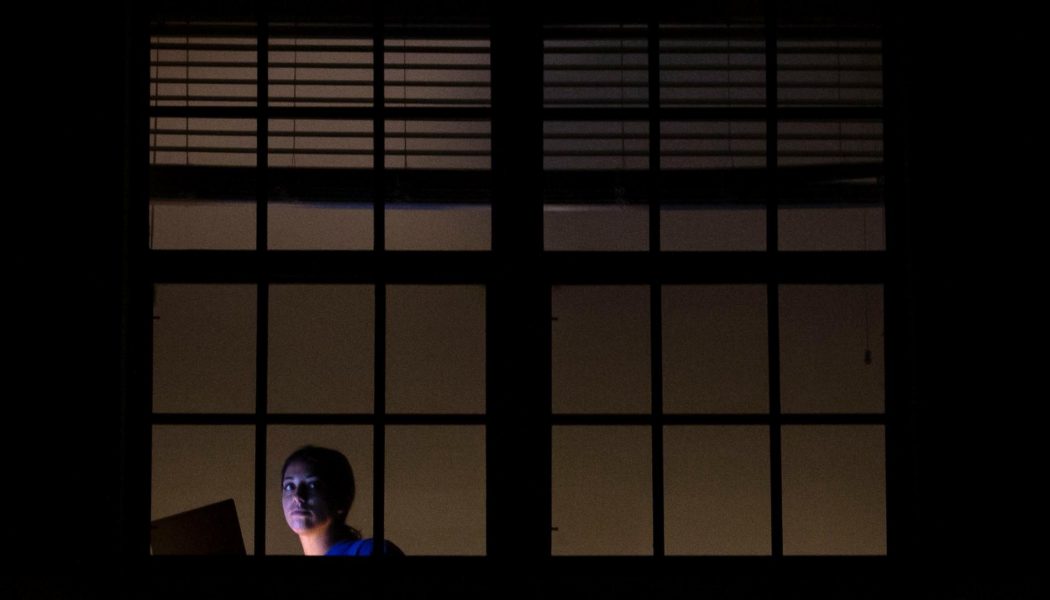 In the year 2020, Jenny Eastwood became addicted to bad news. The 26-year-old from Auckland, New Zealand, couldn’t stop checking the narratives of the deadly pandemic, police brutality, protests, conspiracy theories, and politics as each crisis unfolded, particularly half a world away in the United States. Every 10 minutes yielded another dire post on Reddit or Instagram.

“By the middle of the pandemic, I was feeling really flat,” says Eastwood, who works in marketing. “I felt like humanity sucked in general, but I wasn’t able to concentrate on anything, because I’d be constantly thinking about checking the latest updates.”

Like many people, Eastwood had become obsessed with our world’s seemingly increasing danger—a response that has roots in our evolutionary development. Stories of fear and peril pique our anxiety. They put our brains on high alert, an advantage that once protected our early hominid ancestors from predators and natural disasters, but one that now leaves us “doomscrolling,” endlessly refreshing social media and online news to stay abreast of the latest threats. Our hearts race, and our minds keep constant vigil for the next perceived catastrophe. We yearn to feel prepared, so we become addicted to the updates, coming back for more until the world seems far worse than it ever has before.

Plenty of tragedies are happening to keep us glued to our screens. The pandemic has killed more than 860,000 people around the world as of early September—and that number continues to rise even as the crisis calls attention to rampant social and economic inequality. We’ve been battered by record-setting wildfires in California and Australia, an intense Atlantic hurricane season, crop-mangling locust swarms in East Africa, and a massive chemical explosion that obliterated the port of Beirut and killed at least 190 people and caused as much as $15 billion in damage. Protests against police brutality and symbols of Confederate- and colonial-era oppression have brought millions of people to the streets the world over. As if all of this wasn’t enough, it’s also a highly divisive election year in the United States.

To be sure, 2020 hasn’t been all bad. Telemedicine is making healthcare more accessible than ever. Anti-racist books are topping bestseller lists. Way more people are washing their hands. Americans have adopted hundreds of thousands of shelter pets, and now it seems as if everybody has a dog.

If any year ever feels like the worst, it’s mostly because our brains have a tendency to judge the present more harshly. Unfettered media consumption skews our perception, and it becomes easy to slide into unhealthy patterns of belief.

You don’t have to pull the plug on your whole digital life to get a better outlook on the year. According to experts, learning to tame your persistent negative beliefs or your penchant for looking at the past through rose-colored glasses could act as a much-needed respite from this year’s stress.

Our ancestors might disagree that 2020 is the worst year on record. Sure, frightening things are happening, but many of those things happened in the past, too, including the 1918 flu pandemic, during which 50 million people died. Plus, the belief that civilization is on the decline is a tradition as old as civilization itself. Even Ancient Athenians complained in the fifth century B.C. that their democracy wasn’t what it used to be. These days, we call that belief “declinism,” or “decline bias.”

Before the pandemic, a majority of Americans already believed the country was going downhill. About 60 percent of respondents thought that the nation’s influence on the world was decreasing, according to a 2019 survey by the Pew Research Center. Only 12 percent of the people who responded to the poll were “very optimistic” about the country’s future, while 31 percent were “somewhat pessimistic” and 13 percent were “very pessimistic” about America’s future.

Now, Americans might feel worse about the future than they did before, especially because stay-at-home orders and isolation have been affecting our mental health, which in turn increases the likelihood that we’ll see the world through the lens of negativity bias.

In Western culture, people already have a propensity to interpret present events negatively and tend to prefer the past, according to the research of Carey Morewedge, a professor of marketing at Boston University. That is because our autobiographical memories are biased toward positivity. When we think about the past, we tend to remember positive experiences. This is sometimes called “rosy retrospection,” or “nostalgia bias.”

“If I’m thinking, for example, about how much I love going to baseball games, I’m not going to recall the times when my team lost,” Morewedge says. “We’re judging the past on its greatest hits, but we judge the present on everything we have available.”

Even historians have often fallen into the trap of venerating unrealistically positive versions of the past. Such veneration often pops up in glittering terms like the “Gilded Age,” says Erika Harlitz-Kern, a historian at Florida International University in Miami. In American history, the Gilded Age refers to the period between 1870 and 1900, when the Industrial Revolution gave rise to great leaps in technology, culture, and the arts.

“But this time period was also a time of social inequality, great poverty, and the continued genocide and displacement of Native Americans,” Harlitz-Kern explains. Nonetheless, the term Gilded Age paints the period in an undoubtedly positive light.

Enter social media, which gives us never-ending dollops of our messy, nuanced, seemingly dire present. It’s no wonder that the past looks rosy when we have so much data on the current tribulations of the world right at our fingertips.

Why doomscrolling and social media go hand in hand

Shocking almost no one, excessive news consumption causes stress. According to a 2017 survey by the American Psychological Association, respondents who kept up with the news cycle reported lost sleep, stress, anxiety, fatigue, and other negative mental health symptoms. The same survey found as many as 20 percent of Americans constantly monitor their social media feeds for updates, and one in 10 check the news every hour.

Although it seems like the news today is more shocking than ever, the idea that media consumption negatively affects our perception of the world is nothing new. In 1968, an ambitious investigation kicked off at the Annenberg School for Communication at the University of Pennsylvania. Called the Cultural Indicators Project, it became one of the first comprehensive studies of the influence of television on the attitudes and perceptions of American viewers. The study, led by the school’s dean, George Gerbner, found a direct correlation between time spent watching television and the likelihood that the watcher will perceive the world as more frightening or dangerous, a phenomenon he called the “mean world syndrome.”

Gerber found that viewers who watch violent television shows typically believe violence is common in reality. This fell in line with his “cultivation theory,” which hypothesized that the more television people watch, the more they begin to believe that television mirrors reality instead of being stylized for dramatic effect.

Modern research has continued to reinforce these ideas, but the effects aren’t always negative. It all depends on the medium of consumption and how you use it, according to Mesfin Awoke Bekalu, a research scientist who studies the relationship between social media and public health at the Harvard T.H. Chan School of Public Health.

Bekalu warns us not to conflate the effects of social media with previous research on television consumption. Unlike watching television, which is a passive activity, engaging on social media requires active participation, which means studying its effects is much more complicated. On the positive side, social media can offer its users emotional and social support, which some users have found indispensable during the pandemic. However, social media can also cause us to experience the “displacement effect,” a phenomenon in which mental activity takes the place of a physical human need.

As Eastwood found, social media consumption can become an addictive cycle. Every time we return to social media, we have yet another slew of opportunities to fall into psychological traps. People who are afraid of missing out often spend more time on social media than others, which can lead to fatigue and ultimately to digital burnout. “For young people, upward social comparison can become a problem,” says Bekalu. “Youngsters often engage in comparing themselves with others, which very often leads to feelings of inadequacy and low self-esteem.”

But time spent on social media isn’t as important as how users spend that time. Actively engaging in positive conversations with friends and family members can improve someone’s overall psychological state. By contrast, “lurking,” or scrolling through updates posted by friends or strangers without engaging, tends to have negative psychological effects.

Psychologists say we may never see the present as perfect, but we can learn to control our biases. The first step is to acknowledge how the media we consume shifts our perceptions. It gives our panic-prone primate brains more reasons to feel stressed and more examples of the present to compare with our highly edited version of the past. When we are mindful of our thought patterns, we can take control of them, and give ourselves a reality check, says Morewedge.

“We need to be mindful of the kind of social network we are in, who we are engaging with, and what kinds of content we consume,” cautions Bekalu. “Social media can make us perceive the present as worse than the past, but that isn’t true for everyone.”

To get control of your nostalgia bias, take a more realistic view of history and really compare it with the present. The pandemic is scary, but at least you’re not a medieval peasant with the bubonic plague around every corner and with no understanding of how germs work.

Put the present into perspective by taking stock in what we do have, too. We are making progress socially and scientifically, and research teams around the world are working on vaccines for the coronavirus, a feat that wouldn’t have been possible even a hundred years ago.

For her part, Eastwood didn’t realize the impact her obsession with the news had on her mental health until her partner suggested she take a step back from social media for a while. “I decided just then and there to go cold turkey,” Eastwood says, and she hasn’t regretted her decision since.