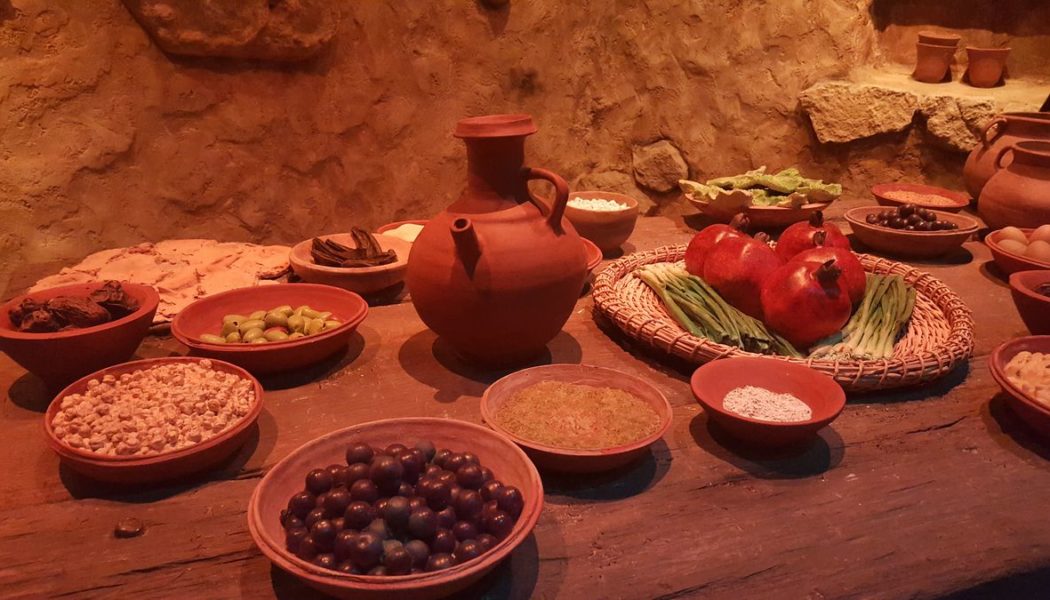 When traveling in the Middle East, I especially enjoy the typical Mediterranean diet: fresh, local, and meat-free, consisting of vegetables (fresh or cured), fruit, dairy products, legumes, olives, breads, etc. This would have been the standard fare in Jesus’ time as well, though minus a few essentials of today: tomatoes, peppers, potatoes, apples, pears, bananas etc.

Fish, on the other hand, might have been consumed more commonly than thought. Some historians even claim that at the time certain hardy species were farmed (like tilapia, “St. Peter’s fish”, commonly farmed in Israel today). Chickens were scarce because of their susceptibility to disease (today, chickens are vaccinated and quarantined).†

Grains, dried legumes, and nuts would have been stored up after harvesting, fish and vegetables preserved in vinegar, fruits dried in the sun, and along with dairy products and bread would have provided nutrition through the Winter. The governing authorities arranged for wheat and barley to be stored in silos and rationed, but eventually became susceptible to mold. And there was always the risk of shortages as a result of a bad growing season, drought, disease, natural disaster, or war.

Food insecurity might explain why after Jesus fed the five thousand on the eastern side of the Galilee, the people wanted to take him to Jerusalem and make him king:

Since Jesus knew that they were going to come and carry him off to make him king, he withdrew again to the mountain alone (John 6:15).

It would have been convenient to have a king who could multiply foods at will. This angered Jesus, who had been teaching them about the spiritual kingdom of heaven on earth:

Woe to you, Chorazin! Woe to you, Bethsaida! For if the mighty deeds done in your midst had been done in Tyre and Sidon, they would long ago have repented, sitting in sackcloth and ashes. But it will be more tolerable for Tyre and Sidon at the judgment than for you! (Luke 10:13-14).

Jesus taught that food insecurity should never be a cause of anxiety:

As for you, do not seek what you are to eat and what you are to drink, and do not worry anymore. All the nations of the world seek for these things, and your Father knows that you need them. Instead, seek his kingdom, and these other things will be given you besides (Luke 12:29-31).

St. Paul had discovered the secret to overcoming food insecurity:

I have learned, in whatever situation I find myself, to be content. I know indeed how to live in humble circumstances; I know also how to live with abundance. In every circumstance and in all things I have learned the secret of being well fed and of going hungry, of living in abundance and of being in need. I have the strength for everything through him who empowers me (Philippians 4:11-13).

The Greek word used for “content” is a philosophical term often used by Aristotle meaning independence from material goods. For St. Paul, the source of this freedom and contentment was Christ.

Jesus is telling us to reprioritize our lives and “seek first the kingdom”, which we can interpret today as the Mystical Church. For the Roman Catholic, seeking the kingdom takes the form of loving God and our neighbor through prayer, fasting, Holy Mass, Confession, Adoration, the Holy Rosary and other devotions, almsgiving, good works, etc. This is a long list that would also include pro-life advocacy, apologetics, and sharing the gospel.

St. Nicholas of Flüe, who is credited for creating the peaceful Switzerland of modern times, didn’t have any concern about food insecurity because he stopped eating, not having a single meal for 20 years.

Post Scriptum: Books on foods from biblical times tend to be disappointing, often including ingredients in the recipes that were not available at the time. Scripture and literature of the first century offer only a few handfuls of specific recipes. One book that takes a more purist approach, Cooking with the Bible: biblical food, feasts, and lore, has a ton of recipes, but the problem is that most of these were created by the authors who admit that a majority of them were never tested in a kitchen. I plan to test a few myself, and if they turn out well, I think it would be a fair assumption that the recipes were prepared similarly in Jesus’ time.