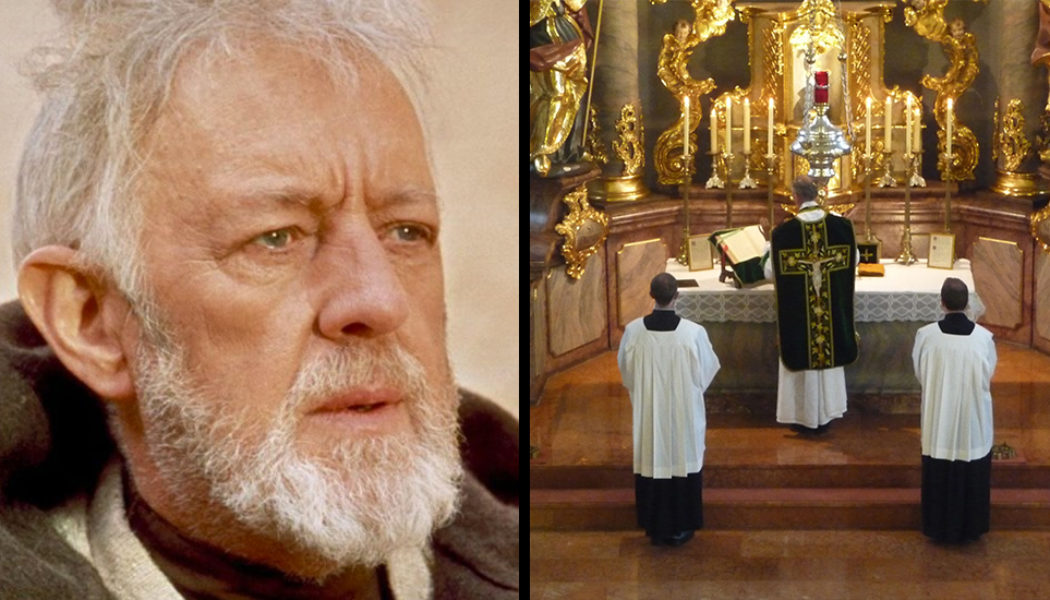 While actor Alec Guinness is most widely known for his foundational role as Obi-Wan Kenobi in the original trilogy of the Star Wars films, he was also a Catholic convert.

In fact, by the time he portrayed Obi-Wan Kenobi, Guinness had been Catholic for around 20 years and would frequently make retreats at Catholic monasteries, witnessing the prayer lives of monks…possibly helping his portrayal of Obi-Wan as a wise, religious hermit.

Guinness grew-up Anglican, but was more of an atheist, while still holding an interest in religious matters. During the horrors of World War II, an Anglican priest gave Guinness a copy of St. Francis de Sales’s Introduction to the Devout Life. This was the beginning of his introduction to Catholicism.

Next he portrayed G.K. Chesterton’s Father Brown in a movie filmed in France. One night a little boy mistook Guinness for a Catholic priest, as he was still wearing his Roman collar. The little boy had a complete trust in Guinness, whom he thought was a priest. Guinness explains what happens next in his autobiography, Blessings in Disguise.

“Continuing my walk, I reflected that a Church that could inspire such confidence in a child, making priests, even when unknown, so easily approachable, could not be as scheming or as creepy as so often made out. I began to shake off my long-taught, long-absorbed prejudices.”

After the miracle healing of his son, Guinness, joined the Catholic Church in 1956 and his wife converted in 1957.

Roughly 10 years after becoming Catholic, Guinness was saddened by the sudden liturgical upheaval that occurred after the Second Vatican Council. The Latin Mass, which he came to love, was now entirely in English.

Guinness wrote several letters about his feelings about the Latin Mass that are quoted in his authorized biography, written by Piers Paul Read.

“My spirits sink so low I can hardly bring myself to the Communion rail. All my fault I know – but my whole being winces at the congregation intoning introits etc. in dull English, slowly and badly – and the reading of the Epistle in a plummy voice, ill phrased and muddled, is a mortification I don’t think I can stand any longer.”

He considered moving parishes, but was loyal to his parish priest, though he did attend Mass at a Jesuit church near Connaught Hotel, where he said, “I managed to get to Mass there a few times and very much liked their conducting of the New Rite.”

About ten years before his death, he asked a friend, “Why, why did we ever abandon a Latin Liturgy? It contained words weighted with 2,000 years of Christian theology, devotion and daily usage.”

Yet, he was faithful to his parish and didn’t criticize his parish priest for not saying the Mass in Latin.

It was a cross he bore in the silence of his heart, desiring the depth of the Latin language at Mass, while being satisfied with the imperfect English celebration.