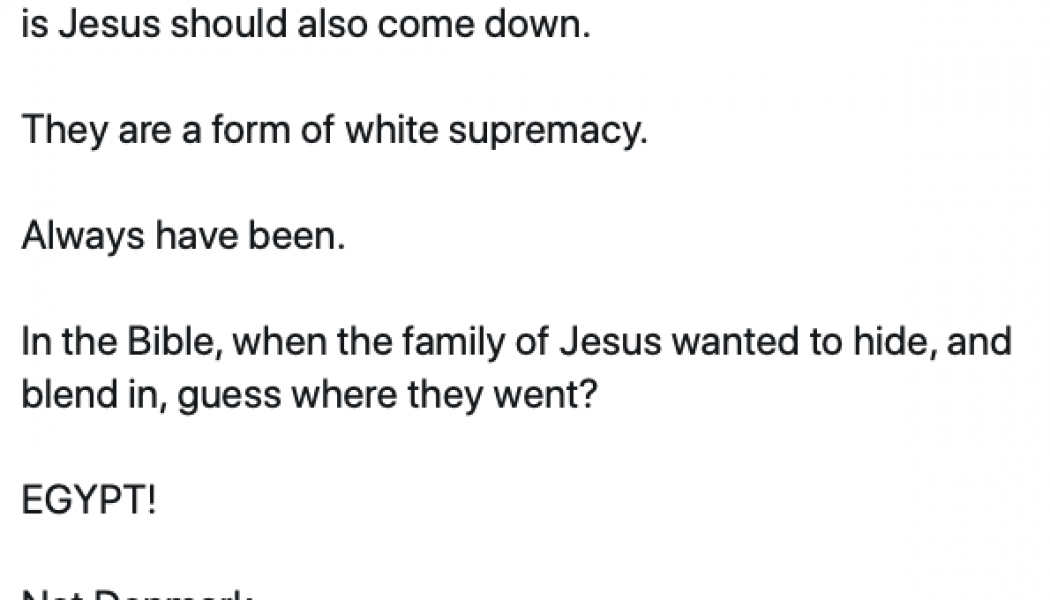 Please pray for our churches!

Over the last several weeks, activists destroyed numerous statues across the country in response to the killing of George Floyd. Activists also tore down two statues of St. Junípero Serra in California over the weekend.

Black Lives Matter activist Shaun King calls for the destruction of all white statues of Jesus, Mary, and the saints. He said in a series of tweets to “tear them down” because they represent “white supremacy.”

Here’s the tweets below:

King’s first tweet reads, “Yes, I think the statues of the white European they claim is Jesus should also come down. / They are a form of white supremacy. / Always have been. / In the Bible, when the family of Jesus wanted to hide, and blend in, guess where they went? / EGYPT! / Not Denmark. / Tear them down.”

King continues in another tweet, saying, “Yes. / All murals and stained-glass windows of white Jesus, and his European mother, and their white friends should also come down. / They are a gross form white supremacy. / Created as tools of oppression. / Racist propaganda. / They should all come down.” A third tweet reads, “If your religion requires Jesus to be a blonde-haired, blue-eyed Jesus, then your religion is not Christianity, but white supremacy. / Christian whiteness, not white Christianity, has been the primary religion of this country for hundreds of years.”

Fr. Bill Peckman of Sts. Peter and Paul Parish in Boonville, Mo. responded to the issue, explaining that “Jesus, Mary, and the apostles appear in various levels of melanin throughout the ages.”

“God is not concerned about what divisions we human beings like to foster. I am pretty sure that the God who made us with various levels of melanin in our skin never assigned a moral value or level of ability/intelligence to those levels of melanin.

“…Images of Jesus, Mary, and the apostles appear in various levels of melanin throughout the ages.

On his blog, he explains that “America needs deliverance.”

Rossi works with the St. Michael Center for Spiritual Renewal. The organization developed the “Catholic Exorcism” app, which includes deliverance prayers for the laity.

“There are signs in our country of a demonic mentality infecting our communities. One of the first signs of the demonic is discord,” he says. “Outbursts of rage, anger and violence often accompany demonic activity; one sign of this in our country is a steady increase in terrorism.

“Finally, Satan and his minions think of themselves as victims and this mentality is increasingly pervasive in the USA.”

“Nevertheless, I believe our country is becoming increasingly demonically oppressed (not fully possessed!).”

“If our country is demonically oppressed, then what must be done? As with any client who is oppressed, we start with closing the doors to the demonic. Stop sinning; stop practicing the occult; start practicing the Faith.”

“Love God and love the people…completely. Judge no one–left or right, republican or democrat, black or white.”

“Pray constantly. Invoke the Blessed Virgin. Pray that our little prayers and sacrifices be filled with the Spirit and share in the redemptive action of Jesus.”

“Historic monuments are typically government or other organizations’ property. No one has the right to tear them down without proper due process.

“While we can understand people’s outrage at the killing of George Floyd, mob violence is never condoned; One act of violence does not justify another.”

“Didn’t Martin Luther King say, ‘Hate cannot drive out hate; Only love can do that.’”

“If people want to change the world for the better, they must love, not hate.”

Our Lady, please pray for and protect the United States!

[See also: 8 Black Saints & Holy People of God Every Catholic Should Know, With Prayers for Intercession]