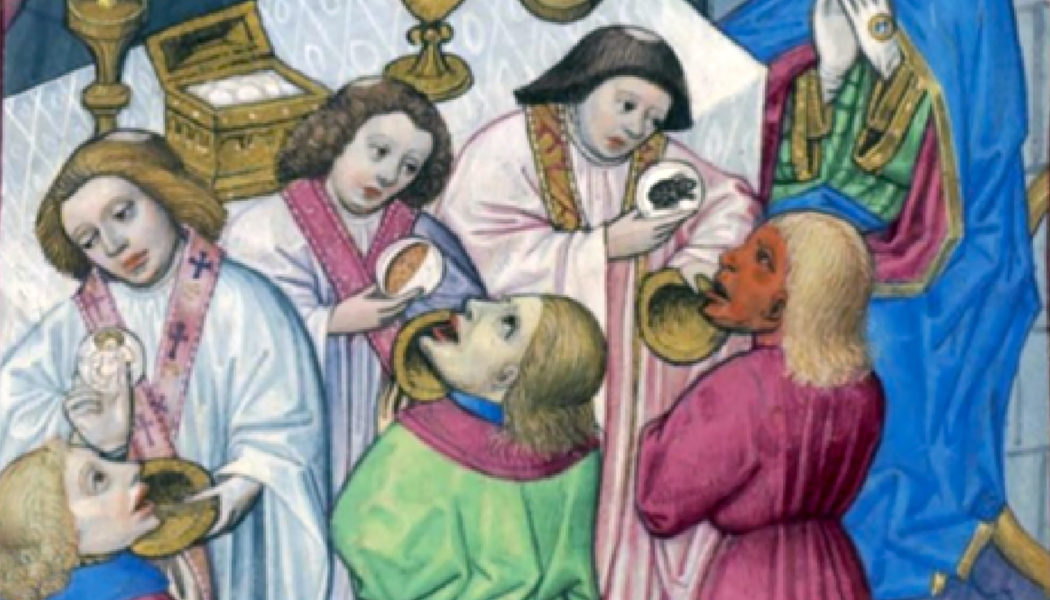 Since the Eucharist and the proper disposition to receive it is in the news, let’s review.

The present day encouragement for all to receive Communion, simply because they are Catholic, desire to receive, and judge, themselves, that they should and can based on that desire — well, that’s not consistent with Catholic practice from any point in its history.

Throughout that history, when Catholics have been encouraged to revisit their practices and receive the Eucharist more frequently and regularly, it has never been in the context of a concern that individuals not feel excluded from the table or feel like “sinners.” It has always been exhorted in the context of a call for individuals to deepen their spiritual lives, turn away from sin and conform themselves more closely to Christ.

The call to receive the Eucharist more frequently, even at every Mass, has been presented with the hopeful trust that all Catholics could be as intentional and Spirit-filled as those early Christians sharing the bread and cup in Jerusalem — not that they already are.

That’s a quote from one of many posts I wrote related to this issue last year.

Then, more recently, The Toad on the Host.

My basic point is that those who are having the vapors at Nancy Pelosi being told she should not present herself for Communion should try, in their vaporizing, to be honest about the history and tradition of the Catholic Church. As should all of us, by the way. It’s definitely complicated, and unpacking it might reveal uncomfortable truths. Again, for all of us.

So, to flesh out the links above, snippets from each:

Eucharistic Coherence 1: On being honest about Catholic tradition and practice

For most of Catholic history, up until the most recent half-century blip, there was a generally understood way of living out 1 Corinthians 11:27-29 in Catholic life: Reception of the Eucharist was for: 1) the baptized Catholic who 2) didn’t publicly disbelieve in the teachings of the Church and who 3) wasn’t in a state of mortal sin.

Over the past half-century, that understanding of “worthiness” has shifted, especially in the United States and Europe. Now it is generally understood that reception of the Eucharist is for 1) the baptized Catholic who 2) wants to receive Communion.

I’m going to dig a bit more into this in a later post, because I think it’s fascinating and expressive of a huge shift in our ecclesiological understanding. But for now, let’s stay focused.

As I said, everyone knows anything about the issue knows this: It’s a pretty massive change.

And it’s a change that generally goes totally unaddressed in the narrative-shaping episcopal discourse that’s around us. No, it may not have shifted on paper (that is, in Church law, the Catechism, and papal statements on the Eucharist), but it certainly has in practice, and it’s a practice which is more significant say, than the (pre-COVID) widely accepted practice of joining hands at the recitation of the Lord’s Prayer during Mass.

And so, it seems to me that the bishops who don’t want an explicit statement on “Eucharistic coherence” and don’t want to deny Communion to anyone need to treat Catholics who are watching and listening like the adults they keep telling us we are. Catholicism is a faith of tradition and history, and yes, obviously, practices develop and change. But why and what does that mean?

Eucharistic Coherence 2: On “reward for saints” v. “bread for sinners”

Has anyone through Catholic history understood the Eucharist as a “reward for saints” that they would only receive if they considered themselves a “saint?” Or is it a false dichotomy?

Of course, in the popular mind, things happen, and subtle truths get distorted so that yes, people would stay away from receiving Communion out of scrupulosity. As I’ve said before, the low numbers of communicants was one of the pastoral motivations for the energy of the 20th-century Liturgical Movement. I wrote about this many years ago here, for example.

But, was it truly as stark as that dichotomy suggests? Is it so today? Well, perhaps a roundabout way to get at the truth here is to take a look at some traditional pre- and post-Communion prayers. What would a person in the pew — who was actually going to receive Communion that day — be praying?

Eucharistic Coherence 4: On what comes after, “O Lord, I am not worthy…”

None of this is new. Others are discussing it far more ably than I, and of course the “teaching of the Church” and 2000 years of practice are clear. It’s just that when I hear discussions whirling around in circles, I try to find another way in. And much of the time I find that asking questions that I hope are tough, but fair of those seeking a change, and not resting until an answer is offered, is important.

No, I’m not worthy to receive Communion. No one is.

Okay. So what does that mean, and when you decide to receive Communion, why do you?

I will add to this randomness that when I contemplate the arguments for a more open, less traditional approach to Communion reception, I hear a couple of things:

First, I hear an almost traditionally Protestant view — not of the Eucharist, but of soteriology: I may be unworthy, but I have faith that God’s love covers me and save me.

Secondly, with all of the formulaic condemnations of more traditional views of the sacrament being “magical” — I hear a great deal of magical thinking in the AECS arguments, in this sense:

My disposition and the nature of my life and choices don’t really matter. Jesus will just come to me and do his thing. Doesn’t matter what I do, what I think or even the details of what I believe. Something’s good going to happen, for sure.

In the Early Church, the assumption was that if one was in attendance at the celebration of the Lord’s Supper, one ate. This is clear from the writings of the Fathers.

However, this wasn’t because “everyone was welcome at the table.”

Because, you know, everyone wasn’t.

It was because the assumption was if you were present, you were intentional about it and committed to the Body of Christ in every way. To use later terminology — if you even showed up, it was a sign that you were “properly disposed.”

Anyone else, who might have separated himself from that table … he just … wasn’t there. He was, literally, ex-communicated, doing public penance, not permitted to gather with the rest of the community. Because he’d removed himself from it by his actions or beliefs.

Enter mass conversions, infant baptism as the norm, Catholicism as a social, cultural and political framework for European communities, private confession and the Sunday obligation — and you have a rather different crowd around the table, don’t you?

Maybe not so intentional anymore.

But, as Hardon — and Pius — note, through the centuries, Catholics still had been exhorted, even as popular piety and theological trends discouraged them — to approach the altar and receive Communion. The Jansenists were the major force against this (thoroughly treated in both documents), and the battle has been waged ever since, despite the condemnation of Jansenism as, yes, a heresy.

But here’s the thing — and this is what I’m going to begin with next time.

This is very, very important to remember — along with those changing circumstances I noted above.

When Pius X and so many others encouraged — enthusiastically, consistently — encouraged regular, frequent reception of Communion, they did so rooted in certain assumptions about who they were addressing and what the spiritual journey was all about.

The Toad on the Host

This essay was first published at Charlotte Was Both and is reprinted with permission.