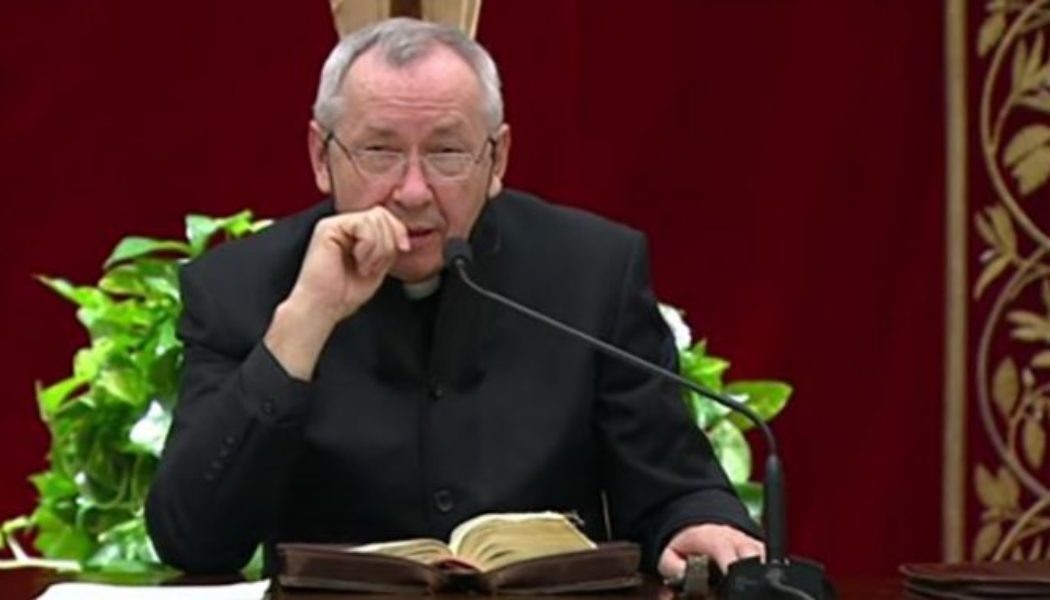 The Diocese of Rome has issued its own statement regarding Fr. Marko Ivan Rupnik, SJ, the world-famous Jesuit artist-priest accused of serial sexual, psychological, and spiritual abuse of at least nine women over a period of several years.

CWR has its translation of the statement in English, below, but it is unlikely to satisfy anyone and in fact raises several questions while answering very few.

Rupnik was quietly punished with excommunication for absolving one of his “accomplices” in “sins against the Sixth Commandment” – Church-speak for sexual misbehavior – then rehabilitated in very short order after he “expressed remorse” for his abuse of the sacrament. He was never charged with any crime related to the abuse he is alleged to have committed.

The statement, for example, says that the Diocese of Rome learned about the accusations against Fr. Rupnik “only in very recent times.” The problem is that the churchman who brought the abuse allegations to official Rome in 2019 appears to have been none other than Daniele Libanori, an auxiliary bishop of the Rome diocese and a Jesuit.

Libanori conducted an inquiry into the Loyola community of women religious that Rupnik had helped to start in the 1980s, during which he heard from Rupnik’s victims and encouraged them to file complaints with the Vatican.

Sure, it is possible that Libanori’s report stayed under Pontifical Secret – still fairly standard operating procedure in Apostolic Visitations, as fact-finding missions like the one Bishop Libanori conducted are styled in ecclesialese – but the level of dysfunction required for no one to have made so much as a phone call to say there was a problem with the guy just boggles. Frankly, it is incredible.

Released on Friday afternoon right before Christmas, the statement describes Fr. Rupnik as a man who “had provided numerous and precious services” to the Rome diocese through the years, and had been “made blameful for heavy abuses of various kinds” especially by reports in the media. To hear Angelo De Donatis – Rome’s Cardinal Vicar – tell it, Rupnik’s is “a case, now full-blown, of accusation in the media against a cleric.”

Well, yes, sort of, but only because Cardinal Luis Ladaria SJ refused to waive the statute of limitations. Ladaria is the Jesuit head of the Vatican office responsible for investigating and prosecuting the sorts of crimes of which Fr. Rupnik SJ – the Jesuit celebrity priest – is accused. You don’t get to whinge about your guy not getting his day in court, when your guys are the reason your guy didn’t have to see the inside of a courtroom at all.

Ladaria’s outfit frequently waives statutes of limitations, usually when a competent churchman asks them to do it. Bishop Libanori – who is also a Jesuit – wrote a letter this week, in which he said the allegations against Rupnik are correct. It’s hard to fathom that consideration not making it into his official report, even if spelling out, “You need to prosecute this creep!” wasn’t part of his job.

The Jesuits say they restricted Fr. Rupnik’s ministry, but those restrictions didn’t keep Rupnik from plying his art, receiving awards and accolades, or even preaching a Lenten retreat to the Papal Household after judges unanimously decided he had done the one thing for which he faced any consequences at all. Sure, it was March of 2020 and the world was on lockdown when that last thing happened, but, this is puzzling at best.

So, people are angry.

That doesn’t sit well with Cardinal De Donatis, who apparently wants people not only to reserve judgment, but to stop reading altogether and certainly to pay no attention to his pesky auxiliary. De Donatis says in his statement:

The judgments that we see spread by many with particular vehemence do not seem to manifest either an evangelical criterion for the search for truth, or a basic criterion on which every state of law is founded: a verbis legis non est recedendum. [“From the words of the law there may be no departure.”]

That’s rich. The “many” spreading judgments “with particular vehemence” may be folks in the street, but they are certainly the scribblers who have been reporting, analyzing, and remarking on this story. As for the strict letter of the law, one is tempted to ask: What about the pope’s vaunted reform law that makes it easier – on paper, at least – to investigate and prosecute both crime and coverup, Vos estis lux mundi?

Then again, Ladaria can hardly be expected to Vos estis himself, and it’s practically impossible to Vos estis everybody, and in any case nobody can Vos estis the pope.

The statement also reminds everyone, more than once, that Fr. Rupnik is not Cardinal De Donatis’s problem. It says that De Donatis may eventually get around to stripping Rupnik of the various offices and titles and responsibilities he has under the Rome vicariate, or maybe not. The statement promises “all necessary collaboration” to the Jesuits and the Vatican types who may need it to manage the Rupnik business, but one does not suspect there was ever any doubt about that.

The Diocese of Rome, faithful to her mission of presiding in charity, comforted by the discernment of her Supreme Pastor, feels it is her duty to pronounce herself on a case, now full-blown, of accusation in the media against a cleric, Fr. Marko Ivan Rupnik S.J., member of the Society of Jesus – a Religious Institute of Pontifical Right – made blameful for heavy abuses of various kinds, protracted over time, to the detriment of various people, starting in the early 1990s, in Slovenia and Italy.

The current pronouncement of the Vicariate of Rome must be understood to be respectful of the competences and decisions of Fr. Rupnik’s legitimate Superiors, as well as the determinations of all the Authorities [It. Istanze] that have dealt with his case, especially in recent months, in particular those of the Dicastery for the Doctrine of the Faith. Indeed, the cleric has until now had a pastoral relationship with the Diocese of Rome on various levels, but he is not in a position of hierarchical submission to the Cardinal Vicar at a disciplinary and eventually penal level.

Until now, Fr. Rupnik had provided numerous and precious services of a ministerial character to the Church of Rome: In particular, the activity of preaching retreats and exercises, above all to the Roman clergy, and the artistic activity that led him, among other things, to decorate the Chapel of the Roman Major Seminary, stand out among the many that have marked his regular and stable collaboration, which began many years ago.

Faced with this disconcerting communication – especially from the media – which disorients the People of God, the whole Diocese is experiencing these hours with concern and dismay, aware of the extreme delicacy of the situation, which – it must be reiterated – has been widely dealt with in judicial venues that fall entirely outside the competence of the Cardinal Vicar, and which is now managed independently by the legitimate Superiors of Fr. Rupnik, as was communicated to us on 16 December [of this year, 2022], Prot. DIR-SOLI 22/006, signed by the DIR Delegate, Johan Verschueren S.J.

The Diocese of Rome, which until very recent times was not aware of the problems raised, cannot enter into the merits of the decisions taken by others, but ensures, also in the name of her Bishop, all necessary support for the auspicable positive resolution of the case, one that should heal the wounds inflicted on people and on the ecclesial body, leading as far as possible to shed full light and truth on what happened: that truth, which alone sets us free (Jn 8:32).

It is the duty of the Church to apply the criteria of truth, which are those of God, with which He looks upon us and judges us. She has two inalienable mandates which are also duties at the same time: to be close to those who suffer and to implement the criteria of truth and justice taken from the Gospel. In the case that is shaking her, it is good to proceed according to a certain path: We ministers of Christ cannot be less [of a] guarantor [of rights] and [less] charitable than a secular state, transforming de plano an accusation into a criminal conviction. The judgments that we see spread by many with particular vehemence do not seem to manifest either an evangelical criterion for the search for truth, or a basic criterion on which every state of law is founded: a verbis legis non est recedendum. [“From the words of the law there may be no departure.”]

The Church that is in Rome at this moment considers it primary and fundamental to welcome with profound respect the pain and suffering of all the people involved in this affair, especially in this liturgical season of the year which calls everyone to recognize Christ the Savior as the only one able to heal the wounds of man’s heart.

In particular, the Diocese of Rome assures all necessary collaboration to the Society of Jesus and to the Higher Authorities for the implementation of the Decree Prot. DIR-SOLI 22/005 of 16 December last, signed by the DIR Delegate, Fr. Johan Verschueren S.J. , in terms of canon law. Among other things, this will probably involve a series of measures with respect to the offices canonically erected under the diocese – the only ones directly subject to the authority of the Cardinal Vicar – with which Fr. Rupnik is still invested, in particular that of Rector of the Church of St. Philip Neri all’Esquilino and Member of the Diocesan Commission for Sacred Art and Cultural Heritage.

The Diocese of Rome is also aware of her duty to reflect and possibly take measures with respect to an activity that has already been started for many years by Fr. Rupnik and his collaborators also in our diocesan purview: it is the well-known Centro Aletti, which began in the early 1990s, then developed and grew under the authority of the Society of Jesus and finally became, on 5 June 2019 (cf. Decree Prot. n. 349/19), Public Association of the Faithful of the Diocese of Rome, of which Dr. Maria Campatelli is currently the Director.

We entrust all to the mercy of the Lord and to the prudent discernment of those who are called to make decisions about the people involved.

Perfect gifts for grandpa. Example of inserts changing colour. How to choose a desk for the home office.