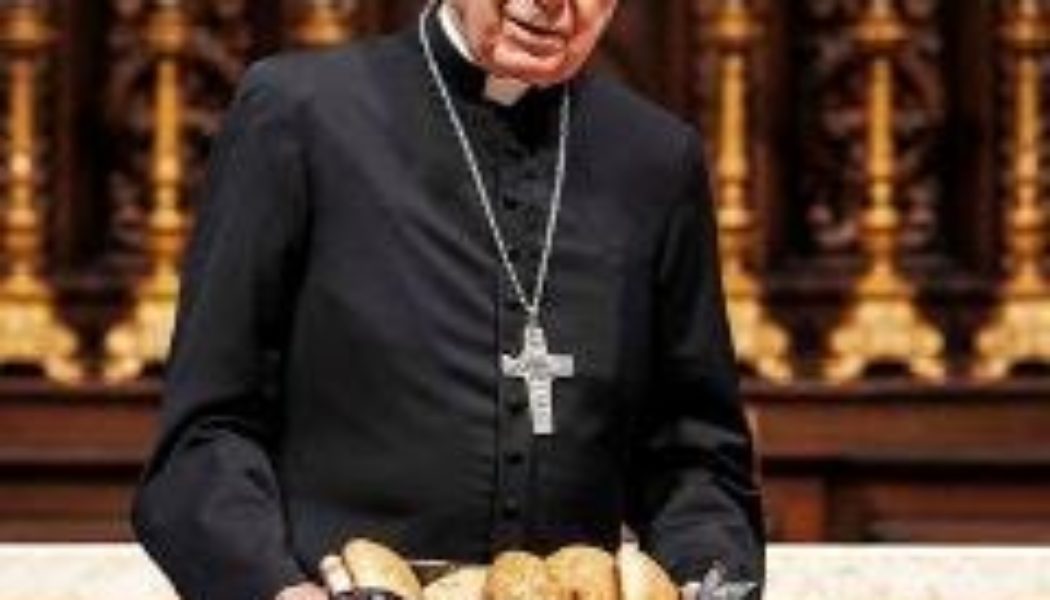 Welcome to The Tuesday Pillar Post. There is news to tell you about, and I’ll get there in just a minute.

But first, indulge me for a moment, as I share with you something you won’t want to miss.

As you probably know, Cardinal Roger Mahony, the emeritus Archbishop of Los Angeles, is something of a persona non grata in Southern California. The cardinal’s ministry isn’t formally restricted in L.A. – he is a cardinal, after all, and subject only to the governance and good will of the Roman Pontiff.

But since Mahony retired in 2011, Los Angeles’ Archbishop Jose Gomez has made clear that the cardinal has no duties in the L.A. archdiocese. Still, +Roger has ruffled feathers in several diocesan cathedrals by having the temerity to show up at episcopal installations or anniversary celebrations.

Mahony, you see, has a record dating back to 1980 of mishandling allegations of clerical sexual abuse, in some cases rather brazenly. Memos and letters paint a picture of a cardinal far more concerned with institutional self-protection, and maybe with career advancement, than with the protection of vulnerable children.

The cardinal has issued a few tepid apologies over the years, but there’s a sense among many L.A. Catholics that his handling of sexual abuse cases was especially egregious, caused untold harm to children and families, cost the diocese millions, and has had serious consequences for a great many people — though none of them are actually named Roger Mahony.

But despite all that, Mahony – now 86 – never seems to display an instinct for laying low or maintaining a discreet profile. And a recent letter from the cardinal might take the cake.

On July 25, Mahony wrote to Los Angeles priests — the archdiocese confirmed for me yesterday the “personal communication from the Cardinal to his brother priests.”

The letter notified priests that Mahony has posed for a new portrait.

The photograph, in which Mahony is holding a basket of loaves, is “meant to harmonize with the call of Pope Francis for us to be humbler, showing compassion and mercy, and being with our people in servant leadership.”

That’s right, the cardinal wrote to the L.A. presbyterate to notify them of his “humbler” portrait.

Mahony wrote that he would “be more than delighted to send signed copy to any Archdiocesan priest who requests one.”

“I already sent a signed an 8 x 10 copy to all the Archdiocesan priests whom I have had the privilege to ordain to the Sacred Priesthood,” Mahony explained, lest any of them feel they’d be forgotten.

Still, for other interested priests, “the 8 x 10 photo will be sent, of course, free of charge.”

I’m sure plenty of them would have been willing to pay. Someone should.

We bring you mostly international news this morning, starting with the latest from India, where Syro-Malabar Catholics will gather on Sunday to protest the allegedly forced resignation of Archbishop Antony Kariyil, who was the Vatican-appointed acting leader of the largest Syro-Malabar eparchy in the world.

The resignation comes amid a major rift in the Eastern Catholic Syro-Malabar Church over sacred liturgy, particularly over the rubrics for the Holy Qurbana, the Syro-Malabar Eucharistic liturgy.

After a split over liturgical postures, most of the Syro-Malabar Church has adopted Vatican-approved rubrics for the Holy Qurbana, but in November 20201, Kariyil dispensed priests of the Ernakulam-Angamaly archdiocese from those rubrics — priests in that diocese say the Vatican has forced on them liturgical changes that are not pastoral or responsive to the spiritual needs of their people.

Karivil’s supporters say he was effectively sacked over the dispensation — and they say that now they’re calling for justice.

Read all about it — a fascinating saga unfolding in a part of the Church little known in the West.

And if you’re curious, here’s what a Syro-Malabar liturgy actually looks like:

Meanwhile, in China, the bishop of Baoding notified Catholics last month that they could be prohibited from the sacraments if they refuse to recognize priests who have registered with the Communist Party-controlled Chinese Patriotic Catholic Association.

At issue, basically, is that a portion of the Catholics in Bishop Francis Shuxin’s Baoding diocese have decided they won’t accept pastors who register with the CCPA, which some of them – but not all – regard as a dangerous state imposition on their persecuted Catholic faith.

Meanwhile, the Holy See has urged Chinese Catholic clerics to register, as required by the government, and to make a set of mental reservations — affirming CPCA requirements only so far as it is “faithful to the principles of Catholic doctrine.”

Shuxin, who spent almost a decade in Chinese “reeducation centers” has apparently decided it’s in the best interest of his clergy to observe Chinese law on the matter — and made clear to his people that their opposition on the matter will not be a welcomed intervention.

Meanwhile, the Holy See’s deal with Beijing, meant to normalize life for Chinese Catholics, is due to expire in three months.

Read about that here.

Ukrainians celebrated last week the feast of St. Vladimir — the 10th century king who is remembered for making Christians – and a nation – of the Ukrainian people.

The feast is a big deal, in Ukraine, as you can imagine. And over the last decade, something interesting has emerged — the two Orthodox Churches in Ukraine, one affiliated with Moscow and one independent, have thrown effectively dueling public celebrations for the feast, with each aiming to do outdo the other, and to cement their claim to be the sole legitimate Orthodox hierarchy in the country.

Well, as you can imagine, the war has subdued all that this year. But the hierarchies of the Orthodox Church of Ukraine and the Ukrainian Orthodox Church – Moscow Patriarchy remain at odds — over theological issues, charges of collaboration with Russia’s invasion, and even over simple pastoral overlap among Orthodox Ukrainians.

While a lot of people have urged the bishops of those Churches to start talking with one another, it seems unlikely. The UOC-MP bishops insist as a condition of dialogue a challenge to the legitimacy of the OCU, and for the bishops of that Church, that’s kind of a non-starter.

So here’s what’s happened. Twenty-one priests in Kiev – 11 from one Church, ten from the other – sat down to talk last month. No bishops, no real agenda, just conversation about their common Orthodox and Christian experience in Ukraine, and the prospect of a way forward for their churches.

The priests issued a short statement calling for their bishops to start talking. Predictably, at least some of their bishops disavowed them. But the dialogue has captured the imagination of Ukraine, and become a big deal in the media — with many people seeing grassroots conversation like that a sign of the vitality of Ukrainian society.

And the priests at the meeting? Well, The Pillar talked to a bunch of them. And they say they’ve learned a lot. And some of them say they’ve experienced a restoration of hope.

This is a cool story, and great reporting. So read all about it.

Where else can you read

about all this cool stuff?

The charges are serious. But in Nicaragua, human rights activists – many of whom usually oppose the Church – are crying foul.

They’ve suggested that either the allegation is false, or that the government has made it impossible for the priest, Monsignor José Leonardo Urbina, to get a fair trial.

Urbina is not a vocal opponent of the Nicaragua’s Ortega regime. But he is known to be a ministerial presence for Nicaraguans facing political persecution. And some activists say that’s the real story of what’s going on.

But whether or not that’s true, the procedural irregularities in the case mean it’s unlikely either Urbina or his alleged victim will see justice inside of a courtroom.

So what do lawyers and activists say about the trial? We asked ‘em.

With an assist from Luke Coppen, here’s a look at the state of Germany’s “kirchensteuer,” whose revenues are climbing, even while Germans have mostly stopped going to Mass.

Rising revenue, plunging numbers  The Catholic Church in Germany announced on Thursday that it received its second-highest annual sum in church tax in 2021. It reported a haul of 6.7 billion euros (about $6.8 billion), despite losing record numbers of Catholics in the same year.

What’s the church tax? All Germans registered as Catholics must pay an additional 8-9% of their income tax annually to the Church. The only way they can stop paying is to declare formally that they are no longer Church members, forfeiting access to the sacraments, including a Catholic burial. Members of Germany’s Evangelical regional churches also pay the tax. They contributed a record sum of around 6 billion euros in 2021.

Where does the money go?  It’s mainly spent on parishes, for example, on the salaries of sacristans, janitors, and musicians. But it also funds the Church’s extensive central bureaucracy and the Central Committee of German Catholics, the powerful lay group driving the country’s contentious “synodal way.”

The German paradox  How can the Church’s revenue rise while the flock rapidly diminishes? “Because of steady increases in the median income of working Germans,” The Pillar’s Brendan Hodges wrote in March.

Is church tax controversial?  Not among Germany’s senior Church leaders and most prominent lay people. Significantly, it is not among the topics addressed by the “synodal way.” But there are a minority of critics among German Catholics.

The Vatican’s foreign minister expressed skepticism about the German Church’s funding arrangements in an interview this week. Archbishop Paul Gallagher told German media that the Church might have to ask itself  “whether this system, which has developed over time and brings with it considerable resources … has really served the Church so well.”

What’s next? Most analysts agree that the current dynamic of rising revenue and falling numbers is temporary. Writing for the business magazine Wirtschafts Woche, Vincent Neumaier said: “For the future, however, the Catholic Church is expecting a less warm windfall. Because at some point, the departures will also have an impact on the income from church taxes, they say … So saving is the order of the day.”

We’ll have more news from you later today, and later this week.

Ed and I are meeting with some priests and other friends this week for a small gathering – but we promise not to let that slow down the news too much.

We are, however, somewhere in the midwest — the people are friendly, and as a true son of New Jersey, that makes me paranoid. What exactly is the hustle around here?

By Wednesday, we’ll be in the Twin Cities. If that’s where you call home, join Ed and me on Wednesday, August 3 at Skinner’s Pub (919 Randolph Ave, St Paul, MN 55102) for a live recording of The Pillar Podcast!

And please pray for for us. We need it.