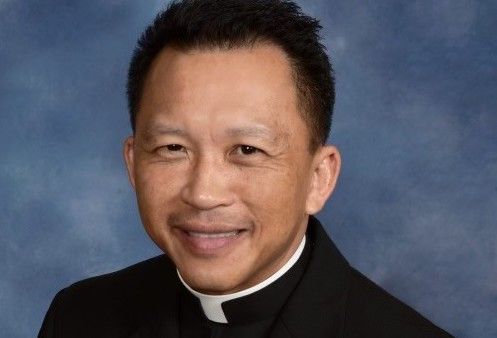 The bishop-elect told Nola.com that his mother died after being shot by friendly fire in Vietnam in 1968, when he was 2 years old. His father was also shot but survived. An older brother had been killed by a landmine.

The family, which included aunts, uncles, and cousins of Tran, was rescued from the South China Sea after they had run out of water.

“I think we would have perished quite soon if we hadn’t been rescued by a U.S. ship,” Tran told Nola.com. “I was so young that for me it was just, ‘Where’s the water?’ and ‘Are we there yet?’” he said. “Later, I felt the pain for my parents’ generation. I’ll never be able to know what they were feeling, how scared they must have been.”

Since his ordination in 1992, Bishop-elect Tran has served as parochial vicar and pastor of several Catholic parishes.

He has been the pastor of Mary, Queen of Heaven Church in Mandeville since 2015.

In August 2015, Tran donated his left kidney to Father Thanh Nguyen, a Vietnamese priest serving in the Archdiocese of Oklahoma City. Tran and Nguyen became friends while studying at St. Joseph Seminary College in Covington, Louisiana.