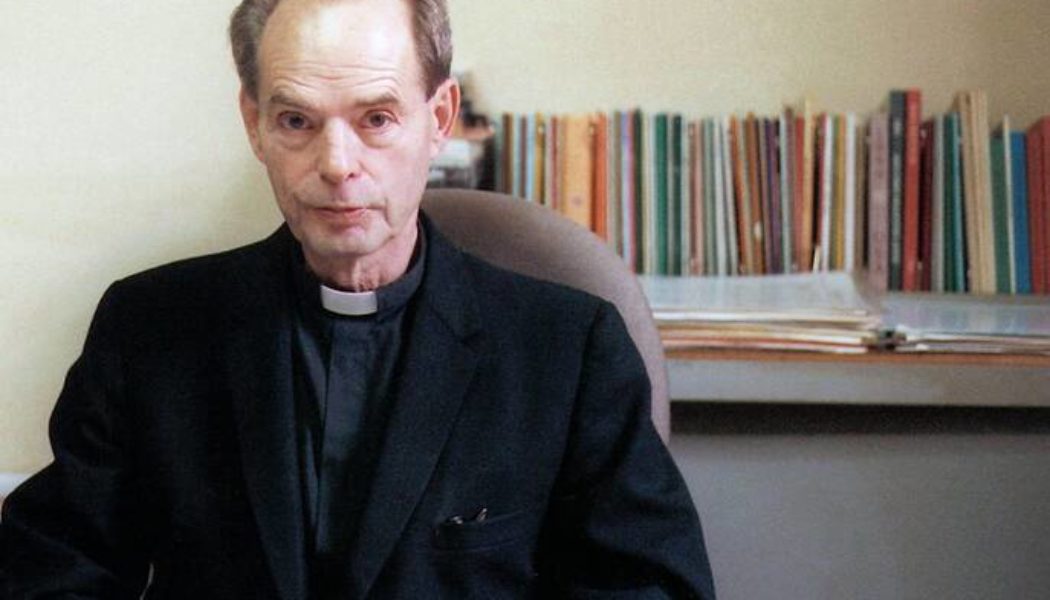 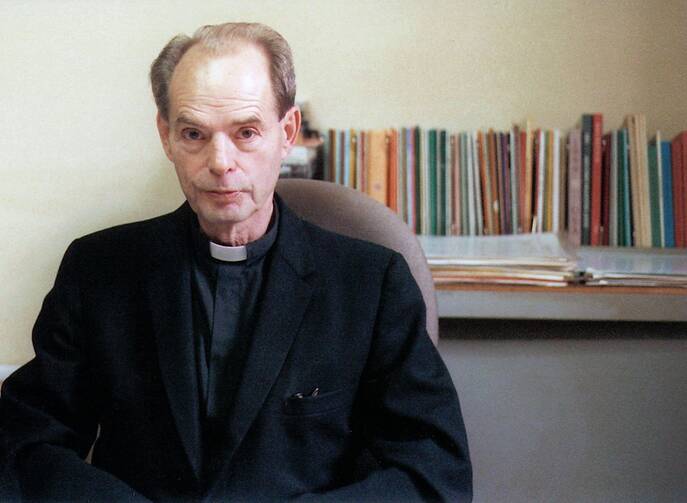 Last week, just shy of his 99th birthday, Kurt Peter Gumpel, S.J., died at the residence for retired priests behind the Jesuit Curia at 5 Borgo Santo Spirito in Rome. Peter, as everyone called him, had lived in Rome nearly all his life. It would be no surprise if most readers have never heard of him, as he was a scholar who did not seek the limelight.

Father Gumpel’s entire career was devoted to the work of the Vatican’s Congregation for the Causes of Saints, where his mastery of the history, development and procedures of canonization was acknowledged as unmatched. Together with his longtime friend and colleague, Paul Molinari, S.J., the Jesuits’ postulator general, Father Gumpel shepherded more than 150 candidates through the sometimes byzantine process by which the Roman Catholic Church investigates, studies and judges those found worthy (or unworthy) of veneration as saints.

Among the successful candidates whose causes they worked on were Jacinto and Francisco Marto, two of the three children who witnessed visions of the Virgin Mary at Fatima; the Forty Martyrs of England and Wales; and several American women, including St. Katherine Drexel, St. Philippine Duchesne and St. Kateri Tekakwitha, the first Native American saint.

Father Gumpel’s name will always be linked with one still-undecided cause: his sturdy defense of Pius XII against the wartime pope’s celebrated detractors.

They were a perfect team. Father Molinari was the polished Mr. Outside: a gregarious world traveler and familiar face at fine Roman restaurants. Father Gumpel was a chain-smoking Mr. Inside who preferred to work in the rooms where he lived and maintained his own storeroom stuffed floor to ceiling with documents and manuscripts. During the only time we dined out at a restaurant during my years as the religion editor at Newsweek—his treat—Peter smoked while I ate.

But in the outside world and the media, Father Gumpel’s name will always be linked with one still-undecided cause: his sturdy defense of Pius XII against the wartime pope’s celebrated detractors, from Rolf Hochhuth, author of the scurrilous play “The Deputy” (1963), to John Cornwell, who wrote the scandalously titled potboiler Hitler’s Pope (1999), to more nuanced critics including recent scholars like David Kertzer. Father Gumpel’s advantage lay in his almost pointillistic grasp of modern German history and the unparalleled access to the pope’s letters and papers he enjoyed for decades before outside scholars were admitted to the Vatican’s (unfortunately named) “secret archives.”

Nevertheless, as the official in charge of Pius XII’s cause, he accepted the Vatican’s decision to pause the pope’s process while the public as well as historians continued to debate the adequacy of his response to Hitler’s systematic annihilation of Europe’s Jews. After all, the whole point of canonizing anyone is to provide the faithful with timely examples of exceptional Christian holiness worthy of imitation.

I got to know Peter Gumpel in the late 1980s, when I lived off and on in Rome doing research and interviews for my book Making Saints. At that time, Vincent O’Keefe, S.J., the vicar general and chief assistant to Pedro Arrupe, S.J., the Jesuits’ father general, thought Peter Gumpel was “the most brilliant Jesuit we have in Rome.” Peter spoke seven languages with ease and read six more. In interviews, his answers were always framed in perfectly grammatical sentences sculpted into verbal paragraphs that never needed editing. In argument he could be fiercely self-assured, but even in those moments he was always courteous, deeply solicitous of others, composed and almost courtly in his manner.

He also had a secret that he casually shared with me during one of our longer conversations. It was a secret known only to a few others—among them Fathers Arrupe, Molinari and O’Keefe. Why Peter let me in on it, I’ll never know.

The secret was that Peter’s last name, Gumpel, was a pseudonym. He told me the family name he was born with—the family he was born into—was Hohenzollern, the royal dynasty of kings and princes, electors and emperors (1871-1918) who ruled all or parts of Germany and Romania beginning in the 11th century, a royal family that continues to this day.

He had a secret that he casually shared with me during one of our longer conversations. It was a secret known only to a few others. Why Peter let me in on it, I’ll never know.

Pope Paul VI also knew Gumpel’s real identity. During the Second Vatican Council, at which both Father Gumpel and Father Molinari served as consultants, the pope asked Peter to write down his life story. “I said to him,” Father Gumpel told me, “‘Holy Father, if you ask me, I must do it. But I have a request in return. As soon as I give it to you, please destroy it.’” I took that to mean the pope did not press the issue.

The story the pope wanted Father Gumpel to put to paper was indeed a gripping one. Kurt Peter Hohenzollern was an only son, and his family expected him to marry and extend their particular royal line. Peter, however, had his heart set on becoming a Jesuit. He turned for advice to an Italian priest who had become a family friend. The priest was also known to rely on Jesuits as advisors. “Follow your heart, he told me,” Peter remembered.

The priest was Cardinal Eugenio Pacelli, the Vatican’s ambassador to Germany at the time of Hitler’s rise to power, soon to be elected Pope Pius XII.

Father Gumpel never told me exactly why he changed his name, but he hinted that it had something to do with his family. “The Nazis were in power and were watching” was all he said. He may have assumed a new identity to protect his relatives: Under Hitler, it would be awkward having a Hohenzollern in the Society of Jesus. Or it may be that using a pseudonym was the only way a Hohenzollern could escape Nazi Germany. In other interviews he suggested his family suffered under the Nazis.

The Vatican’s news release on Father Gumpel’s death said only that he was born in Hanover and was exiled first to France and then the Netherlands; otherwise, its account was terse and uninformative.

The church was his family, the Jesuits his companions, the saints his only royalty.

Not so a longer account in the Dutch daily newspaper Nederlands Dagblad. Hendro Munsterman, the paper’s Rome correspondent,reported that Peter Gumpel had entered the Jesuits in Nijmegen as a teenage novice and remained a member of the Society’s Dutch Province the rest of his life. The article traced what, for the Dutch, had apparently been years of trying to ascertain Father Gumpel’s real identity and origins. Like everyone else, the author ultimately could not fully corroborate the story.

The article reproduced archival documents on Jewish residents of Nijmegen in 1941 that included a German male named Kurt Gumpel. On the other hand, it also quoted a Dutch historian who suggested that Peter was very possibly the illegitimate grandson of a wealthy and politically powerful Hanover industrialist who once owned a private bank called Gumpelbank before losing his fortune.

I hadn’t realized how persistent the Dutch and German media had been in pursuing the mystery of Peter’s paternity—apparently because of his dogged defense of Pius XII—or how often Peter himself was questioned about it on European television. In the most interesting of his remarks, made in response to questions from the German branch of EWTN in 2013, Father Gumpel says, “I come from a very wealthy and very influential family,” that he was the direct heir of his grandfather, and as such was introduced to many influential people “because I would have to take over a great responsibility.” And then there was this: “My name has completely changed and if I say my grandfather’s name, my name will also be known.”

To my ear, these remarks track more closely with his being a Hohenzollern, the story he told to me and others, than with any alternate explanation. They also sound very much like a man who wanted his family origins to be known, at least to people he knew and cared about, but did not want his personal story to be in any way a public burden to the Society of Jesus, or to the cause of Pius XII.

It was also fitting that Kurt Peter Gumpel S.J., was laid to rest in the German cemetery inside the Vatican’s walls, rather than in a vault inside the Hohenzollern castle. The church was his family, the Jesuits his companions, the saints his only royalty.