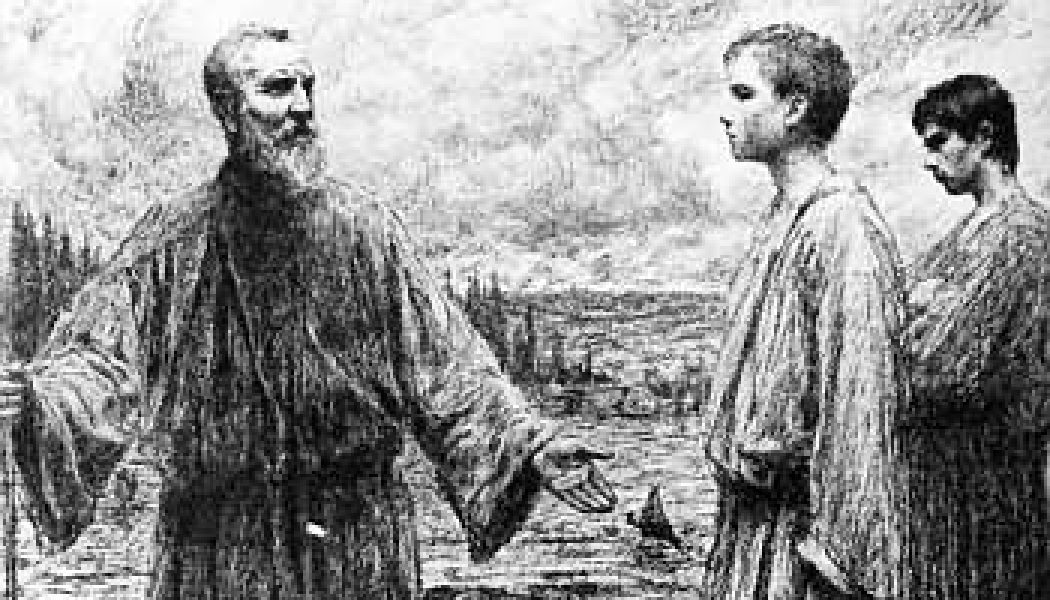 In understanding Sunday’s Gospel, we cannot overlook the audience Jesus was addressing. The text begins, Jesus said to the chief priests and elders of the people …. In other words, He was addressing the religious leaders and religiously observant of His day. He calls at least three things to their attention, three common sins of the pious, if you will: lost connections, leaping to conclusions and lip service.

Let’s look at each of these in turn, remembering that although they are not exclusive to the religiously observant, they are considered in that context. Let’s also learn how they are particularly problematic when it comes to our mandate to hand on the faith through evangelization.

Why emphasize this? Because it is too easy for us to try to sever the link we have with one another, to effect a kind of divorce from people we fear or do not like. For example, on the way to Mass we may drive past tough parts of town and see drug dealers, prostitutes, groups of young men loitering near liquor stores, and other outwardly troubled or rebellious people. It is easy to be cynical and say, “Some people’s children!” or “Look at that; how awful.” Or we may simply ignore them. Yet in doing this we fail to recall that these are my brothers and sisters. So easily we can dismiss them, write them off, separate ourselves from them. But God may have a question for us: “Where is your brother?” (Gen 4:9)

Yes, there are many people whom we try to disown. Perhaps they are of a different political party, economic class, or race. Perhaps we just don’t like them. We divide, but God unites. A man had two sons. Yes, they were different, but he was father to them both; he loved them both. He spoke to them and called them his sons.

In terms of evangelization, remember that Jesus sent us to all the nations. No longer were Israel and the Gentiles to be separated, the one considered chosen people and the other not. Hence the Church is catholic, universal, seeking to unite all. A man had two sons, but the two sons had one father. In seeking to evangelize, has it ever occurred to you that the least likely member of your family could be the one whom God most wants you to reach? Be careful of lost connections, for souls can be lost.

A second “sin of the pious” is leaping to the conclusion that someone is irredeemably lost, writing someone. Many of the Scribes and Pharisees, the religiously observant of their day, had done just this with a large segment of the population. Rather than to going out and working among them to preach the Word and to teach the observance of the Law, many of them simply labeled the crowds “sinners” and dismissed them as lost. In fact, they were shocked that Jesus “welcomed sinners and ate with them” (e.g., Lk 15:2). In effect, Jesus says to them, “Not so fast. Don’t leap to conclusions or write anyone off. Sick people need a doctor. I have come to be their divine physician and to heal many of them.”

Thus Jesus, in today’s parable, speaks of a sinner who repents: [The Father] came to the first and said, “Son, go out and work in the vineyard today.” He said in reply, “I will not,” but afterwards changed his mind and went.

The point is that we just don’t know about people. We should be very careful not to write people off, even those who appear to be locked in very serious and sinful patterns or who seem to be hostile to God. The example of St. Paul should certainly give us hope, as should that of St. Augustine. St. Augustine wrote well on the fact that we just don’t know how things will turn out with people.

For what man can judge rightly concerning another? Our whole daily life is filled with rash judgments. He of whom we had despaired is converted suddenly and becomes very good. He from whom we had expected a great deal fails and becomes very bad. Neither our fear nor our hope is certain. What any man is today, that man scarcely know. Still in some way he does know. What he will be tomorrow however, he does not know (Sermo 46, 25).

Scripture also says, The oppressed often rise to a throne, and some that none would consider, wear a crown. The exalted often fall into utter disgrace; … Call no man happy before his death, for by how he ends, a man is known (Sirach 11:5-6, 28).

I man I knew (now deceased) once told me his story: He was raised in the Church, got all his Sacraments, went to Church regularly, and was a God-fearing man. In his early forties, though, he descended into alcoholism, began to be unfaithful to his wife, stopped going to Church, and was dismissive of God. Were you or I to have seen him at that time, we might easily have concluded that he was too far gone. When he was in his early sixties, he knows not how (except that someone must have been praying for him) but he pulled out of his rebellion and reentered the vineyard. He sought help for his drinking problem and reconciled with his wife and children. Daily mass, weekly confession, daily rosary, and Stations of the Cross—yes, when he returned, he really returned. He said to me that he had done a lot of sinning and so now it was time to do a lot of praying, to make up for lost time, as he put it. He died a penitent in the bosom of the Church.

You just never know. Don’t write anyone off. Nothing stabs evangelization in the heart more than the presumption that someone is an unlikely candidate for conversion. Keep praying and keep working. Jesus tells us the story of a son who told his father to “buzz off,” but later repented and went into the vineyard. Pray, hope, and work. You just never know. Don’t give up.

Don’t think that anyone is a permanent member of the vineyard, either. Pray, hope, and work even for those who seem well within in the vineyard, even for your own salvation. We all know of former parishioners, even leaders, who later drifted from the faith. St. Paul spoke of how he had a kind of sober vigilance about his own salvation: But I discipline my body and keep it under control, lest after preaching to others I myself should be disqualified (1 Cor 9:27).

The text says, The man came to the other son and gave the same order. He said in reply, “Yes, sir,” but did not go.

Consider the second son. He is respectful to his father. When told to go into the vineyard he tells his father that he will do so. He would not dream of cursing his father or addressing him in a strident way. You might say that he was outwardly respectful and religiously observant—a decent sort of fellow.

In the end, though, he doesn’t get around to going to the vineyard. For whatever reason, his obedience to his father was only cursory. His lack of follow-through demonstrates a great danger to the religiously observant: giving God “lip service.” Yes, we will praise the Lord, sing a hymn, shout Hallelujah, and say Amen on Sunday, but come Monday will we obey and go to the vineyard of obedience? Will we forgive those who have wronged us? Will we show generosity to the poor? Will we be chaste and compassionate? Will we love our spouse and children? Will we speak the truth in love, evangelize, and act as God’s prophets?

The greatest sadness of all is that it is our very religious observance (a good and commanded thing to be sure) that often blinds us to our wider disobedience. It is easy (and too common) for the religiously observant person to reduce the faith to rituals and, once the rituals are observed, to check off the “God box.” In effect saying or thinking, “OK, I’ve gone to Mass, paid my tithes, said a few Amens and praised the Lord by singing. Now I’m done.”

“Lip-service Christians” are terrible witnesses and a real blow to evangelization because they are so easy to spot. How on earth can we ever hope to win souls for Christ if people can see that we are just going through the motions, but living lives that are unreformed, and untransformed? Our greatest witness must be a life that is being changed by Jesus Christ, a life that manifests the biblical principles of love, justice, charity, forgiveness, mercy, generosity, and a biblical understanding of sexuality; a life that shows we have a renewed mind and heart.

Now none of us do this perfectly, but pray that God’s transformative power is at work in us and that people can see it in us. There is little that is more destructive to evangelization than phony, lip-service Christians, who give the outward appearance of obedience and religiosity but with no substance behind it. Nothing is more helpful to evangelization than Christians who show lives that are being transformed and made more joyful, serene, and holy.

So in today’s Gospel Jesus points out three powerful obstacles to His grace flowing through us to others: lost connections, leaping to conclusions, and lip service. All of these things lessen our effectiveness as disciples, prophets, and evangelizers sent out to make disciples of all the nations.