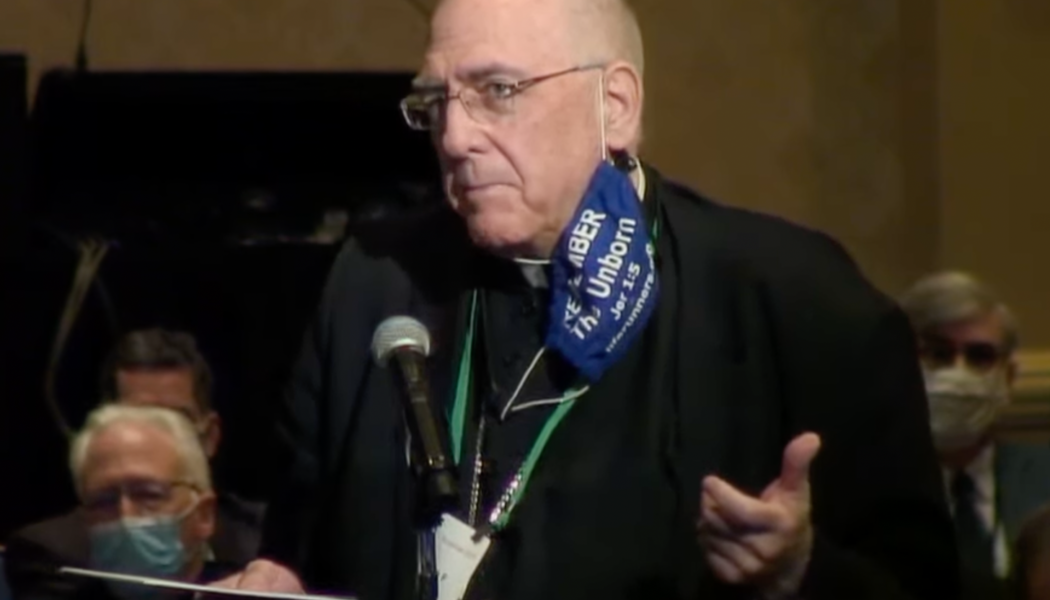 The U.S. bishops’ conference voted Wednesday to adopt a long-debated teaching document on the Eucharist. Despite widespread media and episcopal speculation in recent months, the text does not contain reference to pro-abortion Catholic politicians, though it does mention the possibility of prohibiting Catholics from Holy Communion.

After contentious debates during early conversation over the document, the text passed Nov. 17 by a vote of 222-8, easily clearing the required two-thirds majority of the assembly, and drawing a round of applause from the floor.

The nearly unanimous vote, in which only three bishops abstained, came after barely a half-hour of debate on amendments, a sharp contrast to hours of sharp discussion among the bishops on the same subject in June, and to behind-the-scenes efforts this year to keep the issue off the conference agenda.

But after the vote, several bishops told The Pillar that conference and committee leadership had stressed during executive sessions their desire that bishops would reach substantial agreement before Wednesday’s vote, urging bishops to avoid the kind of lengthy and barbed public debates that characterized the conference’s June virtual meeting.

During discussion on Wednesday Bishop Kevin Rhoades referenced a more in-depth discussion of amendments that had apparently taken place in executive sessions earlier in the week.

During public debate on Wednesday, only a handful of bishops asked to discuss individual amendments which had been either proposed or rejected by the committee, whose recommendation was accepted without dissent in every case.

After a debate which lasted barely half an hour, the bishops voted to adopt the document — which over past nine months has been criticized variously as both too doctrinaire and controversial even for discussion, and as so uncontroversial as to be hardly worth the trouble of publication.

The vote formally adopts the document, after months of media attention and unusually intense disagreement among U.S. bishops. However, during the final debate and vote Wednesday morning, the bishops’ discussion of the document was relatively brief and muted, with much of the discussion on amending the document having already taken place earlier behind closed doors.

Although a teaching document on the Eucharist had been part of the USCCB’s strategic plan for some time, following the election of President Joe Biden, the conference leadership created a special working group to address the unique challenges posed by the country’s second Catholic president, who has publicly dissented from the Church’s moral teaching on abortion while still publicly attending Mass.

That working group was wrapped up in the early months of 2021. The conference said at the time that its work would be incorporated into the doctrine committee’s preparation of a document on the Eucharist, which would address the issue of “Eucharistic coherence” or worthiness, including the problem of prominent Catholics opposing Church teaching while still receiving Communion.

The bishops’ conference does not have the authority to make national policy on the denial of Communion to any individual or class of person, including politicians; that determination is reserved in canon law to bishops.

Nevertheless, there has been considerable media debate in recent months about whether the conference’s document on the Eucharist would mention Biden, or offer some directive on the denial of Communion to pro-abortion Catholic politicians.

Among bishops, debate over the document at times seemed to become a proxy fight on a host of theological and pastoral issues over which they are divided, including the proper pastoral approach to pro-abortion Catholic politicians — bishops spoke during the June meeting both for and against including very direct reference to abortion and politicians within its text, and at least one bishop told journalists he would offer amendments to encourage such references.

But by the time the actual text of document reached the bishops — after months of consultation with bishops in regional sessions — it did not contain any references to pro-choice politicians.

During the debate and vote on Wednesday, the only mention of politicians was made by Archbishop Joseph Naumann of Kansas City in Kansas, chair of the USCCB’s pro-life committee, who struck a conciliatory tone and avoided any mention of the denial of Communion — a topic he had raised ardently during the June debate.

“It was good to reiterate in this document what we have said before about our responsibility to have dialogue and conversation with those who are Catholic but who act in a way contrary to our faith on this basic moral teaching,” Naumann said.

“We’ve said this before, but one of the reasons we need to say it again is because I am not sure that we’ve taken seriously as bishops our responsibility for the care of the souls of these politicians — to really enter a dialogue.”

This included, he said, “acknowledging the difficulty of the work that they do” and the “personal sacrifices” made by people serving in public life.

The bishops should “acknowledge the areas where we agree with them and where we appreciate their support for the Church’s vision on the dignity of the human person,” Naumann said, “but not be afraid to fulfill our obligation to let them know how serious” the issue is.

If the Catholics in Congress in both parties all supported the Church’s teaching, he said, “we would have super-majorities in both houses.”