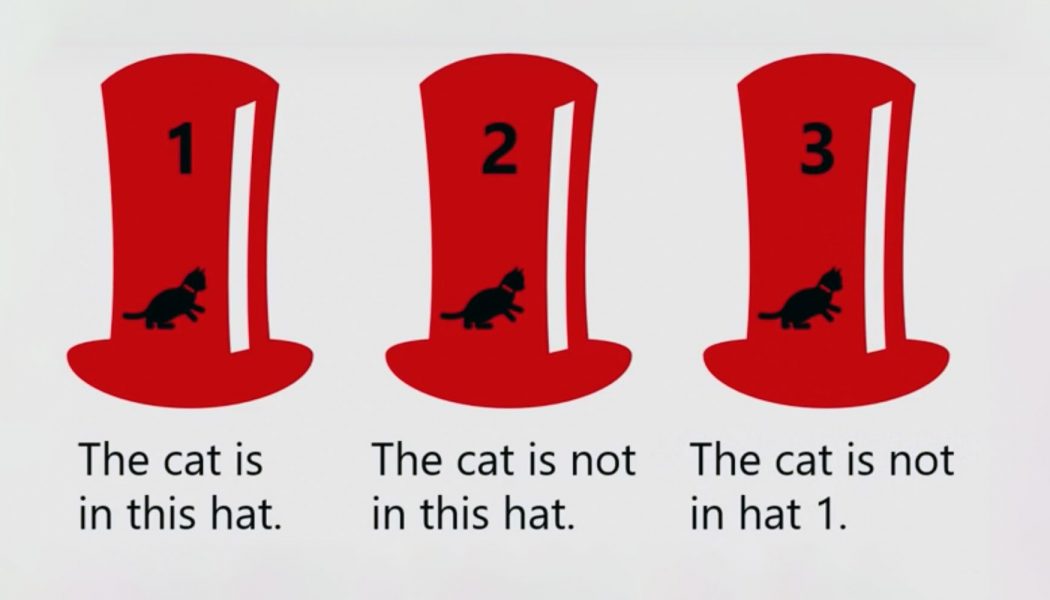 A survey found only 36 percent of people could find the right answer to a seemingly simple logic problem, according to economics and math pro Presh Talwalkar of the YouTube channel Mind Your Decisions.

➗ You love challenging math problems. So do we. Let’s solve them together.

“There are three hats, each with an accompanying statement.

Hat One: The cat is in this hat.

Hat Two: The cat is not in this hat.

Hat Three: The cat is not in Hat One.

Okay, so maybe this problem isn’t as simple as it seems. But thankfully, Talwalkar broke down how to solve the logic problem in a new YouTube video.

So, what is the correct answer?

Well, first, you have to logically consider each case, assuming the cat is in each hat, then seeing if each statement applies to that case. If you end up with one true statement and two false statements, you have the correct cat-in-hat placement.

4 More Puzzles to Try to Solve

The Rubik’s cube has been maddening people for 40 years. Try to figure it out yourself, or learn how to solve it using math.

With just 12 pieces but 200 total challenges, Kanoodle will stump both kids and adults with 2-D and 3-D puzzles.

In one of the best puzzle board games of the year, you and up to three other players attempt to craft the stained glass windows of the Sagrada Familia.

This fast-paced 3-D puzzle game involves a combination of quick thinking, logic, and luck to stack your spheres to earn the most points.

Trust us: Watching the problem play out in Talwalkar’s video is helpful in understanding this complex logic test. The math pro says most people run into trouble assuming the cat must be in a hat where the statement is true. But that’s obviously not the case. The two need to be thought as independent conditions to solve the problem correctly.

That said, we’d just pick up each hat until we found the damn cat, but that’s probably not as impressive.

This content is created and maintained by a third party, and imported onto this page to help users provide their email addresses. You may be able to find more information about this and similar content at piano.io

Who is he that overcometh the world, but he that believeth that Jesus is the Son of God?
1 John 5:5
DailyVerses.net