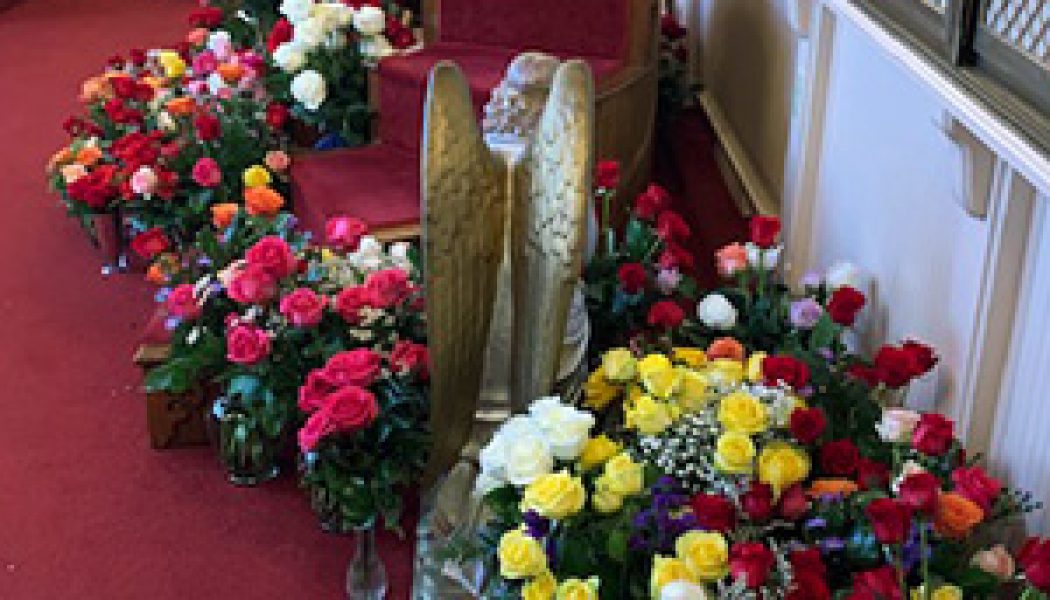 What began as simple way to honor the Virgin Mary and encourage the Rosary became an economic and spiritual blessing for Birmingham-area florists, whose business had been severely crippled by the pandemic shutdown.

“It’s a God thing when something happens beyond your intentions and it just explodes,” Father Joseph Mary Wolfe, of the Franciscan Missionaries of the Eternal Word, EWTN chaplain and chapel dean, explained to the Register, referring to the thousands of roses that have filled Our Lady of the Angels Chapel to overflowing.

It all began on Mother’s Day, May 10, during Mass at the chapel, located in Irondale, Alabama, a suburb of Birmingham. “At the end of my homily, I encouraged people to pray the Rosary and, as a sign of that commitment, to send a rose,” Father Joseph said.

Even though it was Sunday, that very afternoon, viewers from around the country and even from other countries, began calling area florists and ordering anywhere from three to several dozen flowers — almost all of them roses, which are associated with the Rosary and the Blessed Mother.

The next day, Father John Paul Mary Zeller, also of the Franciscan Missionaries of the Eternal Word, reiterated the message in his homily. “Father Joseph lit the match, and I threw gasoline on the fire,” he laughed. “I said, ‘Wouldn’t it be beautiful to give Our Lady a rose for every Rosary prayed and fill this chapel with roses?’ Since Monday, the phone has been ringing off the hook announcing another delivery of flowers.”

The statue of Our Lady of Fatima, whose feast was celebrated May 13, is now surrounded with an array of flowers that sprawl across the chapel floor, around the altar, and flow into an adjoining room known as St. Michael’s Hall. The flowers are affectionately being called “Mary’s Garden.”

“There are so many roses!” Michelle Johnson, director of communications at EWTN, exclaimed. “They are getting deliveries constantly. One man sent 32 roses to represent every member of his family. It smells glorious; it smells like heaven.”

Father John Paul said that on Tuesday evening, he had gone into the rose-filled chapel to pray a Rosary and found Father Joseph was already there praying one. “I started laughing,” he said. “I just felt so joyful to see this gift of overflowing love and devotion to Our Lady. And as beautiful as all this is, like I said in my homily this morning, if you think this sanctuary with all these flowers is beautiful, this is nothing compared to a soul in a state of grace, the way God looks at his sons and daughters.”

The inspiration to send flowers began as a simple way to honor the Virgin Mary and encourage praying the Rosary, but it has become a surprise blessing for Birmingham-area florists ravaged by the pandemic. “It has helped them because they’ve had no weddings or funerals these past six weeks,” Father Joseph said. “One florist said it was really a spiritual experience for her to see this devotion. Callers say, ‘God bless you’ at the end of their calls, and many are evangelizing. Florists are saying this has been a very moving experience for them.”

Shirley Carmack of Shirley’s Florist in Trussville, posted on her shop’s Facebook page: “Father Joseph asked the faithful followers of EWTN to send roses to the Virgin Mary. We have honestly spoken to people from every state in our nation. After closing my shop due to the coronavirus, this was a true blessing to me … and our employees. Our bills will be paid and we will make payroll because a man of God told the world to do this. … Every small flower shop in the Birmingham area has been blessed this week. Thank you Eternal [Word] Television Network!”

In a follow-up interview, Carmack called it an answer to prayer. “We were flabbergasted, to be honest,” she said. “We lost so much business due to COVID-19. This was a blessing for a lot of people. It all trickles down.”

Every order has included a card to Mary, and callers have done more than just order flowers. “They prayed with us,” Carmack said. “They witnessed to us over the phone. It was just unbelievable. A more devout group I’ve never known. It was so heartfelt, so full of love.”

Cameron Pappas of Norton’s Florist said that, on Tuesday, his shop fielded at least 200 phone calls attributable to EWTN viewers. “The people who were calling had no idea what a blessing, what an impact it had on our company. It’s just amazing how God works!”

Dorothy McDaniel of Dorothy McDaniel’s Flower Market said all of her events from March through June were canceled, but the blow has been softened by the 150 orders she received in less than a week from EWTN viewers. McDaniel, who is not Catholic, said a conversation with one caller inspired her to look up the message of Our Lady of Fatima. The feast commemorates Our Lady’s appearance to three shepherd children in Fatima, Portugal, in which Our Lady called for prayer and fasting in order to attain peace and the end of the Great War (World War I). McDaniel said she found it “very relevant to what we’re going through today.”

According to Father Joseph, more deliveries are scheduled through the end of the month. “Every 15 minutes security would call to say another load of roses are here,” he said. All the flowers are taken before the statue of the Blessed Mother where a prayer of blessing is said over them and for those who sent them and prepared them. On the feast of Our Lady of Fatima, Fathers Joseph and John Paul recorded a blessing of the roses.

It’s not just the chaplain, employees, and EWTN viewers who have expressed their appreciation at the explosion of flowers. In order to make room for all the new deliveries, many of the flowers are getting a second life. Some have been given to a local nursing home and passed out to grateful residents, many of whom have not been outside or seen their loved ones in months. Others have gone to decorate the nearby Holy Rosary Church, which is located in a poorer area of town, so those who come to the food pantry not only enjoy the flowers but can take some of them home.

Fathers Joseph and John Paul have thanked viewers for the outpouring of flowers, but are now encouraging people to send spiritual bouquets of their commitments for Rosaries, Chaplets of Divine Mercy and offerings of sacrifices. These bouquets are also prayed over and are put in a basket that has been placed before the Blessed Mother statue.

They recommend sending cards or emails, but not calling. Since the pandemic has almost tripled EWTN viewership, the 15-20 people at the call center are taking 70 calls a day per day per person, with the overflow going to voicemail. Spiritual bouquets can be sent to: Eternal Word Television Network, 5817 Old Leeds Road, Irondale, AL, 35210; or emailed to: viewer@ewtn.com.

Father Joseph is grateful for the prayerful, sweet-smelling witness, saying, “It’s brought a lot of joy to us, to see all these beautiful, magnificent flowers filling the chapel.”