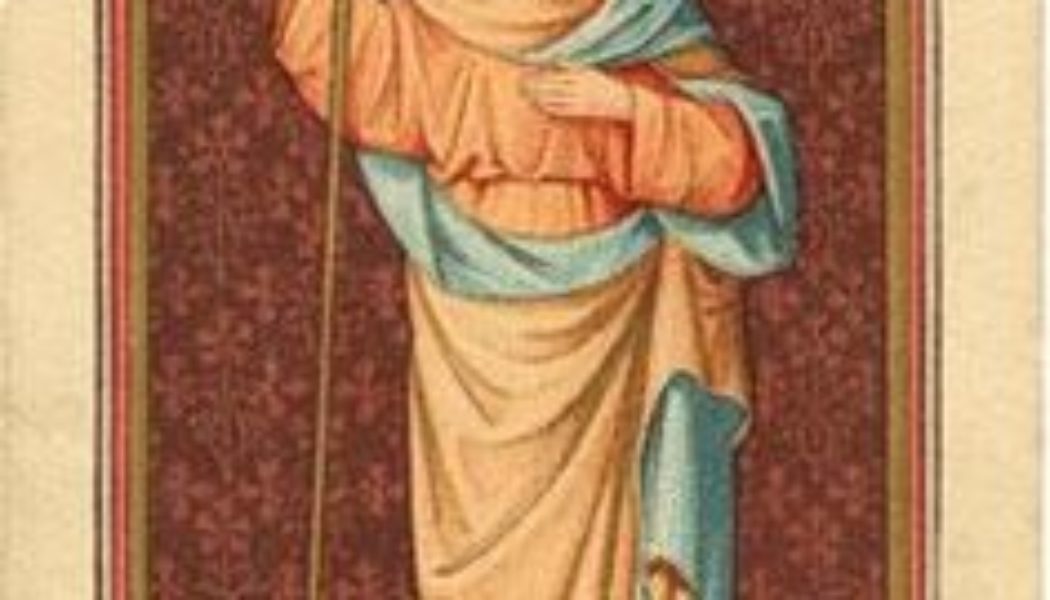 Patron of Spain and pilgrims.

Let Benedict XVI give you the basics:

….. This James belongs, together with Peter and John, to the group of the three privileged disciples whom Jesus admitted to important moments in his life.

Since it is very hot today, I want to be brief and to mention here only two of these occasions. James was able to take part, together with Peter and John, in Jesus’ Agony in the Garden of Gethsemane and in the event of Jesus’ Transfiguration. Thus, it is a question of situations very different from each other: in one case, James, together with the other two Apostles, experiences the Lord’s glory and sees him talking to Moses and Elijah, he sees the divine splendour shining out in Jesus.

On the other occasion, he finds himself face to face with suffering and humiliation, he sees with his own eyes how the Son of God humbles himself, making himself obedient unto death. The latter experience was certainly an opportunity for him to grow in faith, to adjust the unilateral, triumphalist interpretation of the former experience: he had to discern that the Messiah, whom the Jewish people were awaiting as a victor, was in fact not only surrounded by honour and glory, but also by suffering and weakness. Christ’s glory was fulfilled precisely on the Cross, in his sharing in our sufferings.

This growth in faith was brought to completion by the Holy Spirit at Pentecost, so that James, when the moment of supreme witness came, would not draw back. Early in the first century, in the 40s, King Herod Agrippa, the grandson of Herod the Great, as Luke tells us, “laid violent hands upon some who belonged to the Church. He had James, the brother of John, killed by the sword” (Acts 12: 1-2).

The brevity of the news, devoid of any narrative detail, reveals on the one hand how normal it was for Christians to witness to the Lord with their own lives, and on the other, that James had a position of relevance in the Church of Jerusalem, partly because of the role he played during Jesus’ earthly existence.

A later tradition, dating back at least to Isidore of Seville, speaks of a visit he made to Spain to evangelize that important region of the Roman Empire. According to another tradition, it was his body instead that had been taken to Spain, to the city of Santiago de Compostela.

As we all know, that place became the object of great veneration and is still the destination of numerous pilgrimages, not only from Europe but from the whole world. This explains the iconographical representation of St James with the pilgrim’s staff and the scroll of the Gospel in hand, typical features of the travelling Apostle dedicated to the proclamation of the “Good News” and characteristics of the pilgrimage of Christian life.

Consequently, we can learn much from St James: promptness in accepting the Lord’s call even when he asks us to leave the “boat” of our human securities, enthusiasm in following him on the paths that he indicates to us over and above any deceptive presumption of our own, readiness to witness to him with courage, if necessary to the point of making the supreme sacrifice of life.

Thus James the Greater stands before us as an eloquent example of generous adherence to Christ. He, who initially had requested, through his mother, to be seated with his brother next to the Master in his Kingdom, was precisely the first to drink the chalice of the passion and to share martyrdom with the Apostles.

And, in the end, summarizing everything, we can say that the journey, not only exterior but above all interior, from the mount of the Transfiguration to the mount of the Agony, symbolizes the entire pilgrimage of Christian life, among the persecutions of the world and the consolations of God, as the Second Vatican Council says. In following Jesus, like St James, we know that even in difficulties we are on the right path.

Hmmm…that might be a good start for a discussion, yes? It’s got some good content, then veers over into some personal reflection. What a good idea!

As you know, back when he was giving these addresses, various publishers collected them into book form and sold them. You can still find those, but of course, since all these talks are online, you don’t have to pay a dime for them. You also don’t have to pay for a study guide on these talks on the Apostles – the one I wrote for OSV is available here in a pdf form.

The unapologetic reflex of Catholic parishes to charge fees for religious education is unfortunate and a hindrance to evangelization. One answer is to encourage a culture of parish stewardship that says, “We don’t want to charge anyone a fee for catechesis or formation. Let’s all give enough so that we don’t have to.”  Another is to find quality free source materials…and here you go.

Below are the pages from the unit which include St. James the Greater. You can find the rest at the link, and feel free to use as you wish.

More resources I’ve written that you might find useful for adult education in your parish – or simply for individual use.