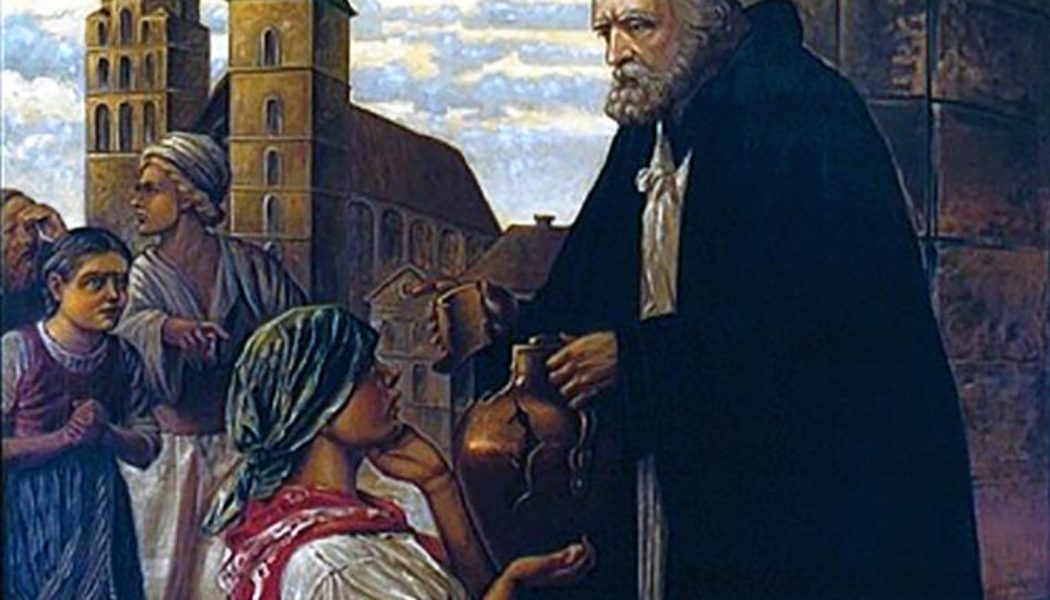 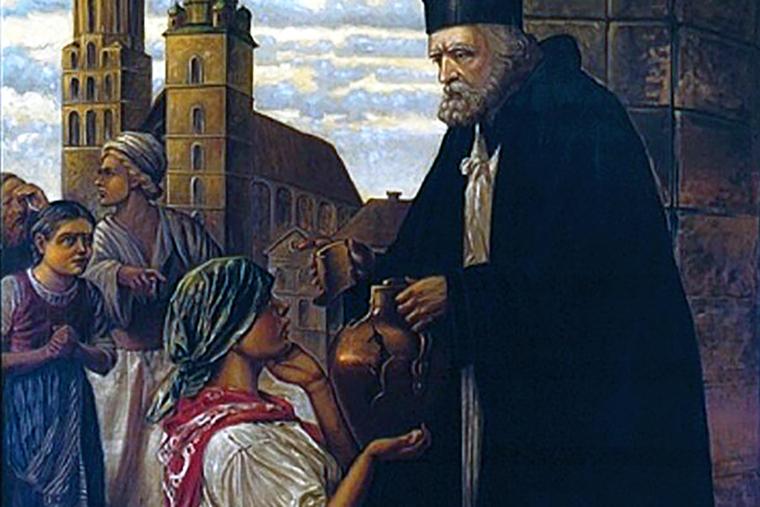 SAINTS & ART: Can our churches and priests today be the vessels of practical charity and mercy Jan was 500 ago?

Jan came into the world in the town of Kęty, about 45 miles from the then-Polish capital of Kraków and 10 miles due south of Oświęcim, a town rendered infamous by the Germans, who called it Auschwitz. Although most of Jan’s life was spent in Kraków and its environs, he also made a walking pilgrimage to Rome.

He began his studies in philosophy in Kraków and graduated in 1418. Ordained a priest sometime between 1418 and 1421, Jan served from 1421-29 as a teacher at the monastery school of the Canons Regular of the Most Holy Sepulcher in Miechów, 40 miles north of Kraków. In addition to his teaching duties, he also served as a manuscript copyist, especially of the writings of St. Augustine, whose Rule was also that of the Canons. His total copyist output exceeded 18,000 pages, some of which are in the Vatican Library but most in Kraków.

In 1429 he returned to Kraków to teach Aristotelian philosophy (which, at that time, also included the natural science of physics). In natural science, he developed Buridan’s theory of impetus, a key concept in medieval science that paved the way for understanding what today we call inertia.

Jan taught philosophy for 14 years, occasionally serving as dean, while also pursuing and earning an advanced degree in theology, a subject he also subsequently taught. He remained a professor until his death in 1473 and was also a canon at the Church of St. Florian in Kraków. As a theologian, he came down in the medieval dispute over pope versus council on the concilarist side, i.e., that supreme authority in the Church rested not with the pope but an ecumenical council, a position the Church has subsequently rejected and finally condemned at the Fifth Lateran Council, slightly less than 50 years after Jan’s death.

He was also noted for his priestly service, especially sacramentally. He spent many hours in the confessional while was known for his concern for the poor. He shared food, clothing and shoes with the poor and as dean started the tradition of daily reserving a portion of food from the professors’ table for a needy person. It’s said when he was served his dinner a beggar appeared. Dean Jan announced, “Christ has come” and gave him his meal. In his own humble life, he also fasted.

Jan actually died on Dec. 24, 1473, the same year Copernicus was born — Polish clergy have long combined zealous priestly service with scholarship. To avoid his feast falling on Christmas Eve, the 1969 Roman Calendar Reform transferred its observance to Dec. 23. He was canonized in 1767.

If you are in Kraków and on the Main Square, there are many churches great and small literally within walking distance. One of them is St. Anne’s Church, in which St. John Kanty’s remains repose.

Today’s saint is depicted in art by Tadeusz Żukotyński (1855-1912) and is at St. Jan Kanty Parish in Chicago. Żukotyński was born in what was then Poland and is now Ukraine. Classically trained as an artist in a Poland under Austrian occupation and then in Bavaria, Żukotyński emigrated to the United States sometime in the 1880s. The period 1880-1920 is known in Poland as the “emigracja za chlebem” (the emigration for bread) because it is estimated one to two million Poles left their partitioned homeland for economic and political reasons to settle in the United States, laying the foundation for America’s Polish-American community. Żukotyński began his professional life in Milwaukee but more than 100 of his art works dot churches in the United States, primarily in the Midwest (especially Chicago). Fourteen large oil paintings, including a series of the life of the Blessed Virgin, adorn St. Mary’s Church in St. Benedict, Kansas.

“St. Jan Kanty in Kraków” depicts Jan as an older man in clerical garb (cassock, cape, biretta). He sometimes is also depicted in academic robes. Jan stands at the door of a church. The Kościół Mariacki (St. Mary’s Basilica), a Kraków landmark from whose higher tower a bugle call resounds every hour, towers in the background. Jan hands over a damaged jug with fresh milk to a hungry and grateful woman. (He is depicted elsewhere in art giving shoes to the poor or money to robbers). Another woman in the background folds her hands: is she praying or also begging (considering the basket at her feet)?

The artist clearly connects Jan with attributes usually part of his iconography (which also sometimes includes a rosary) and sets the event clearly in the cityscape where he lived for much of his life. My only question — the answer to which I do not know — is whether Żukotyński’s women are clothed in garb of the 15th or 19th centuries.

Another artistic depiction of Jan’s life, focusing on his priestly service, can be found here.

On the 500th anniversary of Jan’s death in 1973, then Cardinal Karol Wojtyła, the future Pope John Paul II, spoke thusly of the saint and the roles of Baptism and faith in his life:

A man whose name was Jan, came from Kęt, a little town in southern Poland. He came from there, carrying the treasure of Holy Baptism in his soul and, through that treasure, the treasure of faith. It was given to him inn faith to share in the Word of God from his earliest days, from his childhood and youth. It was a deep sharing, one of full mind, heart, and will. It led him from Kęt to the Academy of Kraków, through many years of study, to the chairs, first of the Philosophy and then Theology Faculty. It led him his whole, almost 83 year long life, which ended on December 24 exactly 500 years ago.

A priest who shows mercy at the church door. As we near the 50th anniversary of the now-overturned and infamous Roe v. Wade, and as we contemplate the Holy Family’s own challenges on the road to Bethlehem, can our churches and priests today be the vessels of practical charity and mercy Jan was five centuries ago?

[Sources for this essay, mostly in Polish (translation mine) can be found here, here, here and here].