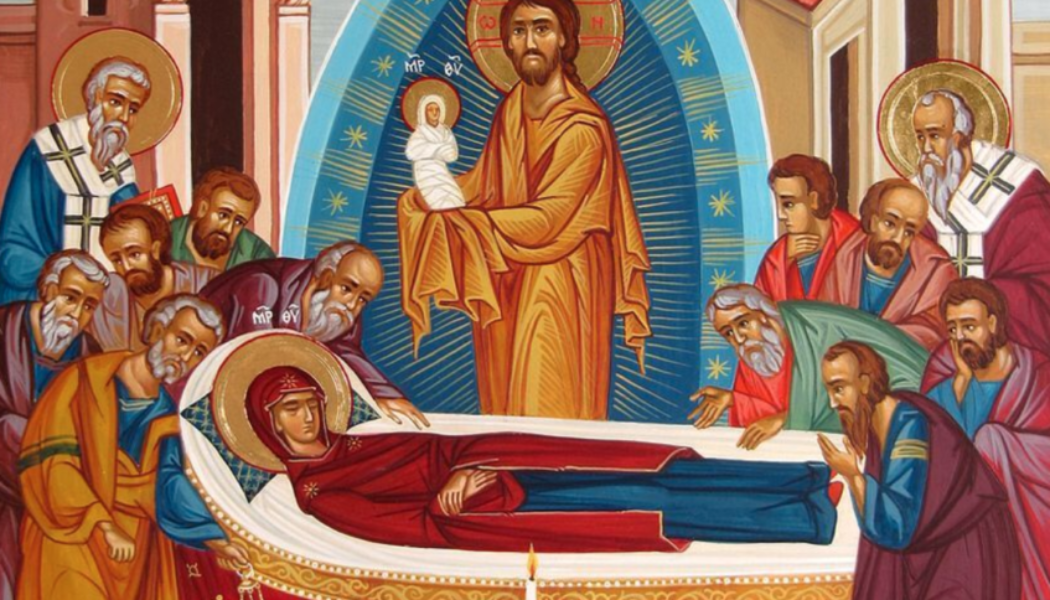 In both Orthodoxy and Catholicism, today — August 15 — is the feast of the transition of the Virgin Mary, the Mother of God, into eternal life. Catholics call it the Assumption, because they believe she was “assumed” (taken up) into heaven at the end of her earthly days without tasting death; Orthodox call it the Dormition (falling asleep), because we Orthodox believe that she died, like every other human being. (A brief discussion explaining the theological distinctions between the Assumption and the Dormition can be found here; it has to do with the different ways the Christian East and the Christian West think of original sin). Both traditions share the belief that God took up to heaven the body of Mary, which is why there is no tomb for her anywhere in the world.

Here is the standard Orthodox icon for the Dormition. It shows Jesus Christ at the deathbed of His mother, receiving her body into His arms. The fact that Jesus receives her body indicates that she did, in fact, experience death, like all humans; you wouldn’t see anything like that in a Catholic depiction of Holy Mary’s transition into eternity:

My son Matt left at 4:30 this morning for the airport, to return to Louisiana for his final year of undergraduate study. I was so sleepy that I slept right through Orthodox liturgy for the feast, so instead I went to a nearby church right after noon to pray this akathist (like a cross between a hymn and a litany) to the Virgin on this, the great feast of her falling asleep. I had the place all to myself, except for the occasional visitor who would come in to say a prayer.

Before I went to the church to pray, I had been re-reading a wonderful Orthodox book about St. Paisios the Athonite and spiritual warfare, titled, The Gurus, the Young Man, and the Elder Paisios. In it, the author talks about how he would visit the great elder on Mount Athos (St. Paisios is to the Christian East what St. Pio (“Padre Pio”) of Pietrelcina is to the Christian West), and the elder once gave him a prayer rope and taught him to say the Jesus Prayer on it. The elder compared those prayers to firing “bullets” at the demons. It reminded me of how, when I was a Catholic, I would pray the rosary in the same spirit. Though I pray the Jesus Prayer on the chotki, or prayer rope, now, I recognize that the Rosary is a very powerful way of praying. I have experienced this myself on a number of occasions.

So when I read this hysterical anti-Catholic screen against the rosary in The Atlantic, the journal of middlebrow-elite liberalism (yes, there is such a thing as middlebrow elite), my first thought was not outrage, but satisfaction: Good, the enemies of God know what they’re dealing with. But my second thought is that this is a remarkable escalation in the culture of hatred against Christians and Christianity that the Left is generating and perfecting. It is impossible to imagine that a magazine of The Atlantic‘s stature would produce such a piece condemning a venerable prayer practice of any other religion. Here’s how the magazine presents the piece on its website:

But then they tweaked the headline after criticism:

I don’t see a meaningful distinction, but I wanted to show that there was that change. I’d like to point out that The Atlantic‘s copy editors are so religiously ignorant that they refer to the rosary as a “sacrament.” It’s telling that you don’t even have to have the most basic knowledge of Catholic theology to edit and approve a piece comparing the rosary to an AR-15.

The piece touches on how some fanatical right-wing Catholics have mixed rosary devotion with firearms culture, in a way that the author thinks crosses a line from metaphorical to literal. I wouldn’t say he’s entirely wrong there, but I would point out that the people who think this way are on the far fringes of Catholicism, and in no way represent the vast majority of Catholics who pray the rosary. But then, Daniel Panneton sees manifestations of the progressive’s ideas of demonology every time he looks rightward. In this piece from May, Panneton, a self-described “public historian” (whatever that means), uncovered what he regards as the white-supremacist roots of Canada’s pro-life movement. Ah ha! Scratch a Canadian Catholic who prays her rosary for the lives of the unborn, find a closet Klucker! So says Daniel Panneton, who also describes himself as a “hate researcher,” and who back in February published a piece in the Globe & Mail accusing the protesting truckers of being in league with antisemites, Islamophobes, and, yep, white supremacists.

In his Atlantic piece, Panneton writes:

Catholics are taught to love and forgive their enemies, that to do otherwise is a sin. But the extremist understanding of spiritual warfare overrides that command. To do battle with Satan—whose influence in the world is, according to Catholic demonology, real and menacing—is to deploy violence for deliverance and redemption. The “battle beads” culture of spiritual warfare permits radical-traditional Catholics literally to demonize their political opponents and regard the use of armed force against them as sanctified. The sacramental rosary isn’t just a spiritual weapon but one that comes with physical ammunition.

Message to Atlantic-reading liberals and progressives: if you see a Catholic on the street praying a rosary, know that they are probably stockpiling guns back home, and that they will probably shoot you — and gays, transgenders, Muslims, Jews, dwarves, two-spirits, vegans, foot fetishists, and anyone who qualifies as the Sacred Other in the left’s pantheon.

OK, I’m exaggerating, but not by much. The uncomprehending hostility that North American elites, especially media elites, have for Christianity allows them to publish such a farrago of bigotry and foolishness, and think they are virtuous. Consider that in the Muslim world, beards are an outward sign of inward piety; the Muslim adviser at Penn told The New York Times in 2011 that generally speaking, the more conservative you are as a Muslim, the more likely you are to have a beard. This piece led a writer at the Middle East Forum, a site critical of Islam, to pen a piece explaining to people that “the Muslim beard bodes trouble.”

I wonder what The Atlantic would say if a writer approached its editors and proposed writing a piece about how big beards on Muslim men are a tip-off that they might have terrorism in mind? Actually I don’t wonder that at all. We know exactly what The Atlantic would say — and they would be right to do so! Now, a longer, more thoughtful piece discussing how things like beards and prayer beads, which have long been a central part of religious traditions, have been weaponized in political or cultural struggle, would be understandable. That’s not at all what the Panneton piece is. It’s pure ignorant fear-mongering from a professional leftist who sees menace everywhere to his right. What he is doing, whether he realizes it or not, is catechizing people into knowing whom to hate, and to know that by seeing a sacred symbol of Catholics as possibly an indicator of violent terrorist potential. The innuendo is extreme: Panneton cites a Catholic retailer’s selling of a replica of the World War I “Combat Rosary” the US Government issued to Catholic doughboys as a sinister sign.

The one to worry about is not Daniel Panneton. There will always be ideologues selling anti-Christian, anti-Catholic polemics. The one to be concerned about is The Atlantic magazine, which by publishing such a sloppy and hysterical propaganda piece, is preparing the ground for persecution. They may not know what they’re doing, but the rest of us have no excuse not to.

In any case, if you are Catholic, you should take this as an inadvertent sign of respect. The enemy knows what’s what. Do you? They’re scared of the rosary. So pray it — not to own the libs (though that might be a fun side effect), but to strengthen the forces of Good in the spiritual battle raging all around us.

UPDATE: A Catholic friend who is a catechist writes:

Rod, I’m just seeing your blog and began reading it.  I noticed a mistake on Catholic teaching at the beginning, so I temporarily stopped reading it to inform you of official Catholic magisterial teaching on whether Catholics are to believe that Mary died.
The Catholic teaching is silent on whether or not she actually died, but many, if not most, Catholic theologians believe she did actually die.  The Catechism states, in pertinent part, the following in # 966: “…when the course of her earthly life was finished, was taken up body and soul into heavenly glory…”.  You’ll note how this official teaching dodges the issue of if she died.
I’ve copied for you a post by Jimmy Akin about the Assumption on today’s site for the National Catholic Register to confirm this.  Thanks for reporting on this story!

4) Does the dogma require us to believe that Mary died?

It is the common teaching that Mary did die. In his work, Fundamentals of Catholic Dogma, Ludwig Ott lists this teaching as sententia communior (Latin, “the more common opinion”).

Although it is the common understanding of that Mary did die, and although her death is referred to in some of the sources Pius XII cited in Munificentissimus Deus, he deliberately refrained from defining this as a truth of the faith.John Paul II noted:

On 1 November 1950, in defining the dogma of the Assumption, Pius XII avoided using the term “resurrection” and did not take a position on the question of the Blessed Virgin’s death as a truth of faith.

The Bull Munificentissimus Deus limits itself to affirming the elevation of Mary’s body to heavenly glory, declaring this truth a “divinely revealed dogma.”

Thanks for the clarification!

UPDATE.2: Wow, they took down the bullet-hole-rosary graphic: