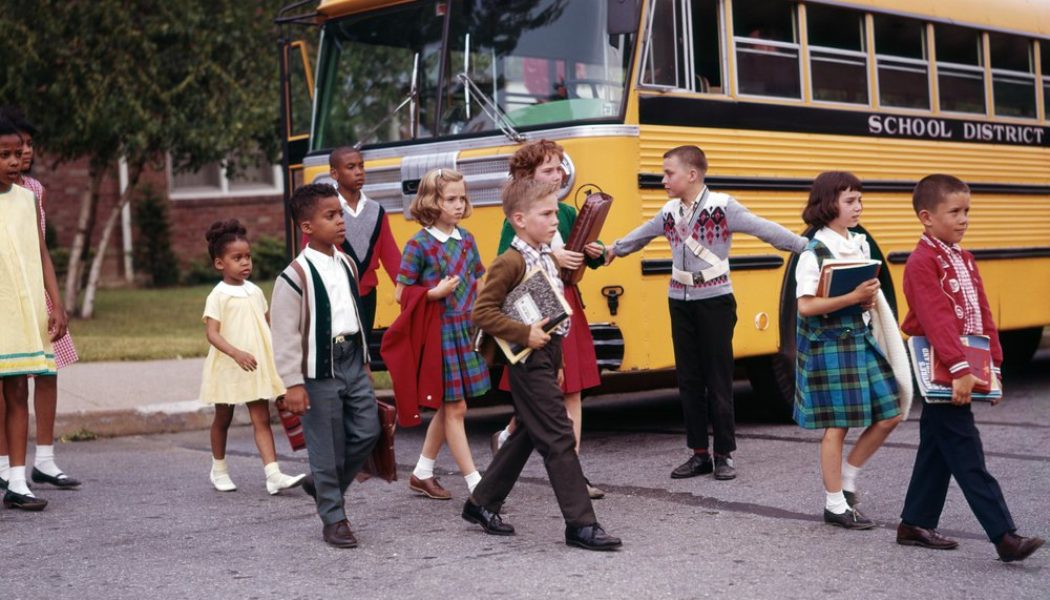 In a 1939 issue of American Childhood, the lyrics to the song, “The Wheels on the Bus,” made their first public appearance. Songwriter Verna Hills composed verses that celebrated the routine of traveling on a bus, closing each with the phrase, “over the city streets.” Likely unbeknownst to her, at that same time 80 years ago, school transportation officials from each and every state gathered in New York to decide what that bus, with its wheels going “’round and ’round” and its horn going “beep beep beep,” would look like.

The brainchild of education expert Frank Cyr, the meeting at Columbia University carried the goal of establishing national construction standards for the American school bus. Two years earlier, Cyr had conducted a ten-state study where he found that children were riding to school in trucks and buses of all different colors, and even horse-drawn wagons, in the case of one Kansas school district he visited. Standardization would solve two problems and simultaneously revolutionize school buses themselves: one, being uniformly one color would make bus travel safer; two, costs to districts would be lower as construction specifications would make it possible for manufacturers to mass-produce buses.

At the time of the conference, Cyr had more than 30 years of experience with rural schools. Born in 1900 in a sod house in Nebraska’s Republican River Valley, Cyr and his fellow classmates, like many rural students, traveled great distances to school. After attending Grinnell College and graduating from the University of Nebraska with a bachelor’s degree in agriculture, Cyr spent nearly a decade in country schools, first as a teacher in Winner, South Dakota, then, as a school superintendent in Chappell, Nebraska. In promoting school-bus standardization and greater use of the buses in rural areas, Cyr saw an opportunity for rural school districts to save resources through consolidation. The Rockefeller-backed General Education Board provided Cyr $5000 ($92,000 in 2019) to study local school-bus needs and bring together the various parties who could effectuate needed changes.

Speaking at a luncheon commemorating the 50th anniversary of the 1939 school-bus conference, Cyr recalled that some school districts, by the time of the conference, had already adopted yellow as their school-bus color. Others, though, wanted to paint their buses red, white, and blue. He said at the time, “Red, white and blue was camouflage, if you think about it. It was to make kids patriotic. It was well-meaning, but they made the buses less visible. And I don’t think it really had much effect on patriotism.”

During those seven days of deliberation in the Grace Dodge Room at Columbia Teachers College, Cyr said he hung strips of different paint colors from the wall, in “50 shades ranging from lemon yellow to deep orange-red.” The conference attendees, which included representatives of the bus manufacturing industry, selected a small group to make the final color selection, and the orangish-yellow color they chose has been the industry standard ever since. Initially christened National School Bus Chrome (a reference to the lead-chromate yellow in the original paint), the United States General Services Administration (GSA) now calls the color National School Bus Glossy Yellow, or Color 13432 in the Federal Standard 595a color collection that GSA uses for government procurement. The National Highway Traffic and Safety Administration (NHTSA), the federal agency that regulates bus safety, states on its website that federal law does not require school buses to be yellow, as “State and local governments establish policy for student transportation, including how buses should be identified.” Instead, NHTSA encourages states to adopt its voluntary guidelines on operational safety, like Guideline 17, which “recommends that school buses be painted ‘National School Bus Glossy Yellow.’”

“The yellow is not pure spectral yellow,” says Ivan Schwab, clinical spokesperson at the American Academy of Ophthalmology. “The best way to describe [the color] would be in wavelength,” says Schwab. The wavelength of the popular school-bus color is “right smack in the middle” of the peak wavelengths that stimulate the photoreceptor cells our eyes use to perceive red and green. The red and green photoreceptor cells, or “cones” as they are commonly known, are the two most predominant cones in our eyes. Schwab says, “If you get a pure wavelength of one color…and you hit just one cone with it, you’re going to have x amount of transmission of signal to the brain. But if that [wavelength] were to stimulate two cones, you’ll get double the amount of transmission to the brain.” Remarkably, “That color that we are calling school bus yellow hits both peaks equally.” So although they may not have fully comprehended the science behind it, the color Cyr and his colleagues chose at the 1939 conference makes it hard for other drivers to miss a school bus, even in their peripheral vision. “And it’s darned big,” Schwab adds.

Like London’s antiquated black cabs and ungainly double-decker buses, America’s yellow school buses have endured while so many other forms of transportation have seen dramatic changes. That’s due, in large part, to the school bus’s astonishing record on safety. Cyr said, “The most often asked question [during the 1939 conference] was, ‘Will this standard improve safety?’” School-bus color was just one of 44 standards the conferees voted on in 1939. Others included “body lengths, ceiling heights, door specifications, and aisle widths.” These and other standards have evolved over the years, with a constant focus on improved safety. The last major structural changes came in 1977, according to Ron Kinney of the National Association for Pupil Transportation (NAPT). Interviewed for this article, he said, “In 1977, the Feds came out with major changes to the bus itself, to the fuel tank, to integrity, to the seating requirements, to rollover protection.” Those new standards also provided for wheelchair-equipped buses and other disability-related access on conventional school buses. These and other updates over the years have paid off. NHTSA calls the school bus “the safest vehicle on the road.“

The school bus transportation system is the largest mass transit system in the United States, yet school buses account for less than one percent of traffic fatalities each year. Students on school buses, NHTSA says, are 70 times safer than those who travel to school by car “because [school buses] are the most regulated vehicles on the road; they are designed to be safer than passenger vehicles…; and in every state, stop-arm laws (referring to the mechanical stop-sign arm that swings from the side of the bus when stopped) protect children from other motorists.” Kinney, says, “If you look at fatalities, it’s not the occupants of the school bus that have fatal injuries, it’s the people that run into the school bus.”

Just as features of the bus have evolved over the years, so has the country around it, and in some cases, the yellow school bus itself has become a powerful representation of education and access in American history. The cases collectively known as Brown v. Board of Education, in which the Supreme Court decision struck down “separate but equal” public education in America, started with a demand from black parents in Clarendon County, South Carolina, that their local school district provide a school bus for their kids. President Jimmy Carter started his political career on the Sumter County, Georgia, school board where his first major act in 1955—one year after Brown—was to advocate for school buses for black schoolchildren. In a 2019 podcast, Carter said that when the Georgia state school board agreed to provide buses, “The legislature ordained that the buses loaded with African-American children had to have their front two fenders painted black. They wanted everybody to know that a bus was hauling black kids instead of white kids.”

Twenty years later, in the 1970s, when a federal judge in Boston ordered the desegregation of that city’s schools, yellow school buses were literally the vehicle of change. While the racial segregation in Boston’s schools was partly the result of racially segregated housing patterns, the judge also found the city school board had “intentionally segregated schools at all levels” and provided inferior educational resources to black students. As a remedy, the judge’s order put children from black neighborhoods on school buses to white neighborhoods and vice versa. The order met with violent protests from white residents and mobs hurling bricks at school buses in predominately white South Boston.

While Boston has come to represent the country’s most violent reaction to busing, Detroit, San Francisco and many other metropolitan areas also struggled with busing as a remedy for school segregation and educational inequality. While many white Americans framed their opposition to busing as a preference for neighborhood schools, children had been riding school buses in Boston and elsewhere for decades, without incident. Julian Bond, the civil-rights activist and later chairman of the NAACP, observing the tenor of the opposition to school desegregation by busing, concluded, “It’s not the bus, it’s us.”

In the United States today, 26 million—55 percent of all schoolchildren—will board 480,000 yellow school buses. But what does the future hold for the iconic vehicle?

In 2020, the successor to the 1939 Columbia Teachers conference will convene in Kansas City to vote on new updates to school bus specifications and operating procedures. This meeting, called the National Congress on School Transportation, has met, on average, every five years and draws representatives from every part of the school-bus transportation industry. The agreements that come out of these meetings hold great sway with state legislatures, says Kinney, who is also one of the coordinators of the Congress. Two new issues on the 2020 agenda are new technologies (like apps to track bus location) and alternative fuels (Kinney predicts that electric buses will dominate within a decade.). Asked whether a new color for the school bus might come up for debate 80 years later, Kinney said, “Oh yeah, it’s come up in the past.” Some, he said, would like to adopt as the new color for the school bus a fluorescent lime color sometimes seen on fire trucks. It’s a democratic process, Kinney stressed, and such a suggestion could come up from the floor.

Schwab, the ophthalmologist, would leave well enough alone. “They hit it right,” Schwab says, suspecting Cyr and his colleagues did some scientific testing in arriving at school-bus yellow. “It is impressive. They hit it, and I think they hit it right for the right reasons.”