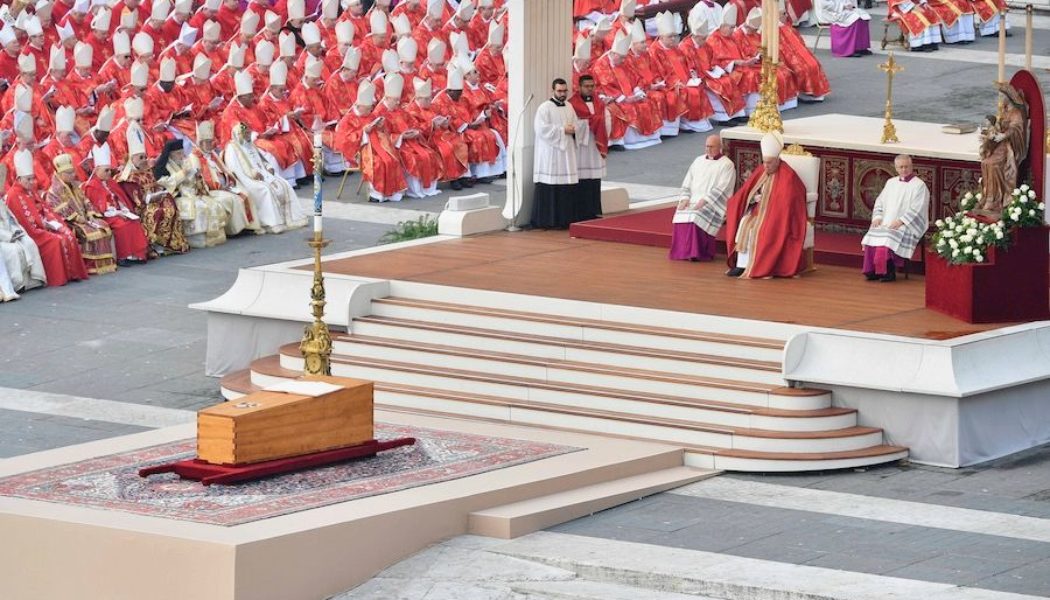 Soon after the funeral of Pope Benedict XVI, a video began circulating online, which appeared to show a man being denied Holy Communion at the Mass, as he knelt before a priest distributing the Eucharist and attempted to receive on the tongue.

The video was apparently an excerpt from Vatican Media’s own broadcast of the funeral. And, of course, the video is without sound or context — any possible extenuating circumstances or additional information is not available to those who view it.

There is only a story told in a few seconds of video — a man kneels, removes the hood of jacket, a priest says something to him and pulls back the sacred host, the man seemingly attempts again to receive it as he rises from the ground, and the priest seems to rebuke him. The man, and a woman behind him in line, turn around and return into the congregation.

The clip has gotten a lot of traction online, generating thousands of shares across several platforms. Online and social media commenters have described the video as “disgraceful,” a “vile act,” and an example of the problems with “FrancisChurch.”

Even to relatively mainstream Catholics in many parts of the world, the clip seems like a rebuke of fairly normal and commonplace Eucharistic pieties.

To some Catholics who feel aggrieved by Traditionis custodes, the clip will feel like a confirmation of their fears about the direction of the Church’s liturgical praxis.

And to online voices bent on fomenting distrust, fanning flames of division, or amplifying persecution narratives, the short clip could be a gold mine. One can imagine the clip becoming the basis for various cris de coeur in the Church, some genuine, some more opportunistic.

Of course, there could well be other elements of the story. There are at least other possibilities for interpretation.

But those possibilities are probably remote. The simplest explanation is also probably the most likely: that the man was denied Holy Communion because he was kneeling, and attempting to receive the Eucharist on the tongue. If that is true, it was an injustice.

There were no announced Covid restrictions at the funeral, nor any apparent in widespread practice.

If the denial is what it appears to be, it does not represent a scandal of policy, but of one priest’s practice, which is out of conformity with the Church’s norms for the reception of the Eucharist. While the General Instruction for the Roman Missal allows episcopal conferences to set norms regarding the posture for the reception of the Eucharist, the version of the text posted on the Italian bishops’ conference includes no such norms, affirming instead only that “the faithful receive Communion kneeling or standing.”

In short, barring some otherwise unknown circumstance, there seems no legal reason why a priest at a Vatican liturgy could deny a kneeling Catholic communion on the tongue.

The Holy See is well-positioned to explain through the Vatican press office something about the video – a subject of scandal and upset for some Catholics, with the prospect of becoming a lingering point of division.

Except, the Holy See hasn’t done that.

The Vatican press office has not responded to The Pillar‘s two requests for comment on the video. It does not appear to have offered comment to any other news outlet either.

And that might point to a more systematic issue in the life of the Church — that when the Holy See is reluctant to engage with relatively small issues, they are allowed to become amplified into much larger problems.

On the whole, the Vatican press office works well to provide journalists access to papal and ecclesial events, to make speeches or homilies available, to provide press conferences when important documents or policies are released, and otherwise to communicate its official agenda. Journalists in Rome this week have praised the Holy See’s efforts to give media access to the events surrounding Benedict XVI’s death, including regular and well-organized access to the St. Peter’s Basilica, when Benedict XVI was lying in state.

But journalists working on both major stories and minor flare-ups are also generally accustomed to receiving no comment in response to questions for clarity on the handling of internal matters, even those with a public face. The “funeral communion scandal” demonstrates how that approach can compound problems, or allow them to fester:

If the Holy See said Friday that it had seen the video, that it appeared to contravene policy, that it reaffirmed the right of Catholics to receive the Eucharist on the tongue or kneeling, and that it was looking into what happened, the statement would probably quell most of the online firestorm about the matter.

The Vatican could even point to resources on its own website, which affirms that “the practice of kneeling for Holy Communion has in its favor a centuries-old tradition, and it is a particularly expressive sign of adoration, completely appropriate in light of the true, real and substantial presence of Our Lord Jesus Christ under the consecrated species.”

It could note that its own website recognized that in 2008, Benedict XVI “began to distribute to the faithful the Body of the Lord, by placing it directly on the tongue of the faithful as they remain kneeling,” and so it is understandable that the matter might be important at the late former pope’s own funeral.

Without commenting on particulars of a situation it hasn’t yet researched, the press office could offer both catechesis and reassurance on the reception of Holy Communion.

Some will be upset by the silence. Others will suggest, from a variety of motives, that it implies Vatican opposition to Eucharistic piety – and likely find a willing audience for that claim. Despite the opportunity to clarify, the Holy See may choose not to offer any counter-narrative.

For its part, the press office might believe that any effort to address the story wouldn’t assuage critics, or that any comment would fuel a small issue circulating online into a global news story.

But if silence is meant to keep the story small, it’s worth noting who it will impact: a set of practicing Catholics, and a set of their pastors.

For those most distressed by the video – and for those who aim to discredit the Holy See and the pontiff – silence may well be taken as indifference to a matter of sacred and sacramental importance to many practicing Catholics — a matter connected to real and living Eucharistic devotion.

Even some well-meaning Catholics, pastors among them, will ask why they are being asked by parishioners to clarify “what happened at the Vatican,” while the Holy See doesn’t do so. If parishioners are scandalized, confused, or upset by what they see online, the burden of resolving that will seem to be borne far from the Via della Conciliazione in Rome.

Further, others will see in the Vatican’s apparent “no comment” a connection to other pressing issues for the Church.

Pope Francis, like all Churchmen in recent years, has made his own a promise of “transparency” for the Church. Ordinarily, this promise is made in the context of clerical sexual misconduct of some kind. Some Catholics have expressed skepticism about that promise. They’ve pointed out that trust is earned.

After the communion video, some will likely make that point again.

They’ll ask this: If the Holy See won’t comment when a priest appears to break the rules in broad daylight, on Vatican-recorded video, amid an event of global and historic significance, will the same office be candid if a priest breaks the rules under cover of darkness, far from the spotlight of a papal funeral?

Expert hosting reviews and advice. Get profitresolution & claim 99% discount. However, the concept of buying and renting has been made easier with the advent of the internet.