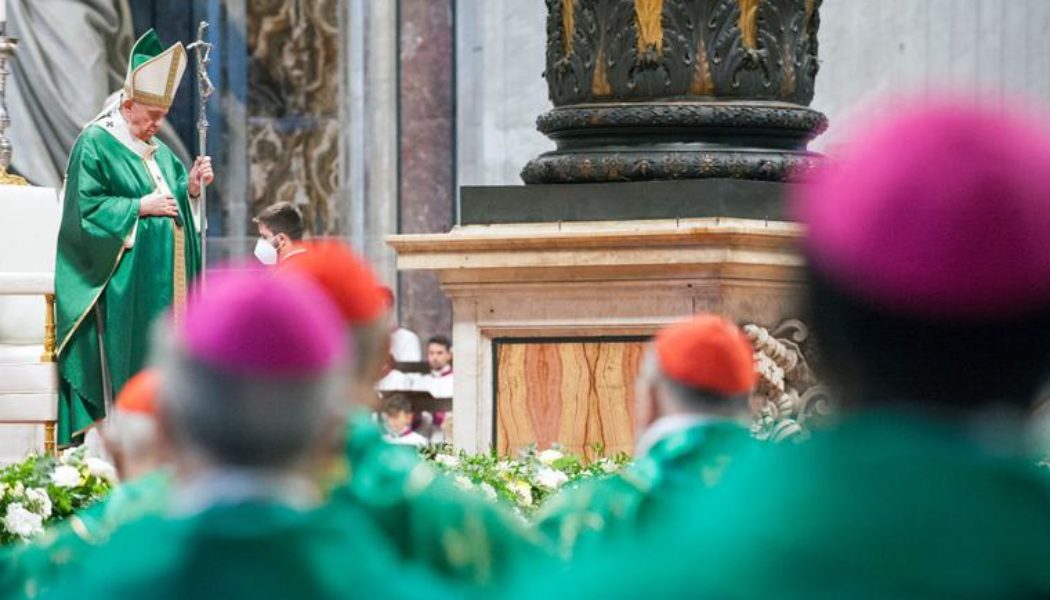 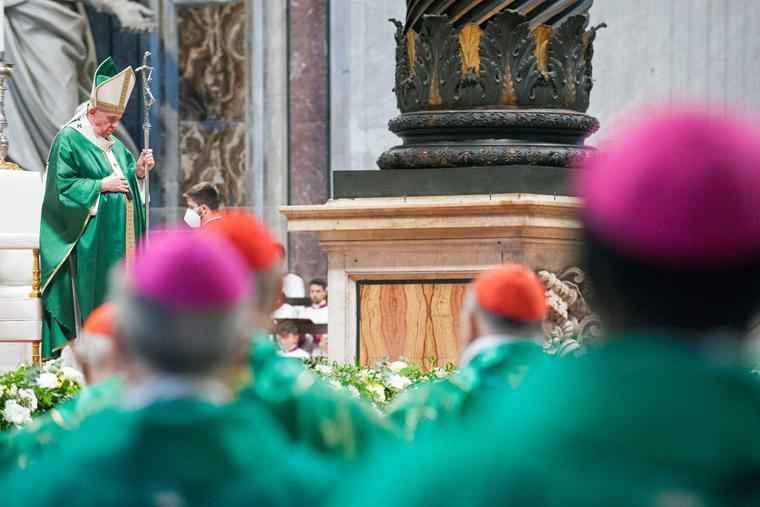 In his Pentecost homily the Holy Father noted that “oddly, the Holy Spirit is the author of division, of ruckus, of a certain disorder.”

“Yet at the same time, he is the author of harmony,” Pope Francis continued. “He divides with the variety of charisms, but it is a false division, because true division is part of harmony. He creates division with charisms, and he creates harmony with all this division. This is the richness of the Church.”

In that same address he spoke of an Anglican contribution to the synodal process for the synod on synodality.

“As you know, the Catholic Church has inaugurated a synodal process: For this common journey to be truly such, the contribution of the Anglican Communion cannot be lacking,” Pope Francis said. “We look upon you as valued traveling companions.”

All of which raises an interesting perspective on the synodal process. What if the walking together results in a walking apart? Should we expect divisions and harmony, divisions without harmony or harmony without divisions?

While the synodal process for this particular synod on synodality is a novelty for the Church universal, synodal governance and processes are hardly new in the life of the Christian people. There is widespread confidence that this new synodal process will end in harmony but, as the Holy Father’s recent comments indicate, division is also possible.

More specifically, the confidence that this synodal process will renew the Church, rather than divide it, seems to overlook how actual synodal governance is faring in the Church today. Consider six failures of the synodal model.

The most ancient and venerable synodal processes and structures of ecclesial governance are in the Eastern Churches, both Catholic and Orthodox. And Russian Orthodoxy, with more than 50% of all Orthodox believers, is in an advanced state of implosion. Russia’s war against Ukraine, supported by the Moscow Patriarchate of the Russian Orthodox Church, induced the governing synod of the Ukrainian Orthodox Church of the Moscow Patriarchate to declare its “full independence” from the Patriarchate of Moscow. It is the most significant division in Christianity in recent centuries.

Synodal structures proved inadequate to meet the challenge of one part of the synod waging war on the other.

The break between Kyiv and Moscow follows the “excommunication” of Constantinople by Moscow in 2018, and the fearsome denunciation of Moscow by Alexandria and their subsequent schism early this year.

These mutual exchanges of synodal rancor and hostility follow the epic failure of the 2016 Holy and Great Council of the Orthodox Church, convened by Patriarch Bartholomew of Constantinople. Intended to be a meeting of all the Orthodox Churches, it was boycotted by Russia, Bulgaria, Georgia and Antioch. Fewer than half of all Orthodox believers were represented at the “Pan-Orthodox” Council.

Pope Francis received a delegation of Orthodox clergy from various Churches just before Pentecost at the Vatican.

“Today too, the world is waiting, however unconsciously, to hear the Gospel message of charity, freedom and peace,” Pope Francis said to them. “It is a message that we are called to bear witness to with one another, not against one another or apart from one another.”

That might have been provocative, as being against one another and apart from one another is exactly what Orthodoxy has lived in the past decade.

If those who have practiced synodality longest and most comprehensively are now collapsing into divisions, whence the confidence that Catholic unity will not be imperiled?

The Anglican Communion has four “instruments of communion (unity)”: the archbishop of Canterbury, the Lambeth Conference, the Anglican Consultative Council and the Primates’ Meeting.

The Lambeth Conference, to be held every 10 years, is the most important of these meetings. It is an approximation of synodal governance with Protestant trappings; bishops and delegates from around the world attend at the invitation of the archbishop of Canterbury.

The last Lambeth Conference, held in 2008, was attended by about 680 bishops. Approximately 200 who were  invited refused to attend. A principal “instrument of communion” failed to include more than 20% of the Anglican Communion, and most from the growing congregations in the global south.

The Anglicans may be, as the Holy Father says, “valued traveling companions” in the venture of synodality, but they are not models of walking together. They walk apart.

The Catholic Church has its own long history with synodality. The Syro-Malabar Church of southern India is second only in size to the Ukrainian Catholic Church among Eastern Catholic Churches, and is likely to become the largest in the near future. How is their synodal governance working?

For more than 20 years they have been fighting over how to implement the liturgical decrees of their governing synod. In recent years, unable to resolve matters synodally, they have appealed to Rome for an exertion of papal primacy to resolve the issue. Pope Francis has obliged, mandating that the synodal decrees be followed.

The head of the Syro-Malabar Church, Cardinal George Alencherry, had to offer the Eucharistic liturgy on Palm Sunday this year under police protection, as tension among the priests and people became a threat of physical violence. The ancient synodal structures of the Syro-Malabars are insufficient to guarantee the physical safety of the Eucharist, even when offered by a cardinal. What aspects of this experience of synodality should be offered to the rest of the Church?

The 2019 Synod on the Amazon was preceded by a widespread consultation of the lay faithful. It was, in effect, a precursor for the current synodal process for the synod on synodality.

After much consultation and deliberation, the synod fathers called for married priests and the possibility of women deacons. Pope Francis shot both proposals down. And in an archly crafted footnote (132), he observed that “it is noteworthy that, in some countries of the Amazon Basin, more missionaries go to Europe or the United States than remain to assist their own Vicariates in the Amazon region.”

Pope Francis was blunt. Why should the Church make special allowances for the Amazon, when the local clergy themselves opt to live in a comfortable rectory in Chicago or Vienna rather than ply the remote waterways of their own territory?

The relevance to synodality is evident. In essence, the Holy Father rejected the synod’s proposals because he doubted the missionary identity of those who made them. The synodal process for the synod on synodality is specifically intended to consult those who do not hold or practice the Catholic faith. How will their proposals be evaluated?

The multi-year synod process is unfolding at the same time that the German “Synodal Way” is proposing the rejection of settled Catholic teaching on moral and doctrinal questions. The process has already been formally denounced by neighboring bishops to the east (Poland) and to the north (Nordic), as well as other bishops around the world.

The German exercise in synodality will likely provoke a pontificate-shaking crisis before the official synod on synodality even gets underway in 2023.

With implosion in Russia, excommunication in Orthodoxy, failing instruments of communion in Anglicanism, threats of violence in Catholic India, faltering zeal in the Amazon and looming schism in Germany, the synodal path is not unambiguously producing the harmony of Gospel unity.

What then are the grounds for confidence that the synodal process for the synod on synodality will produce anything different?