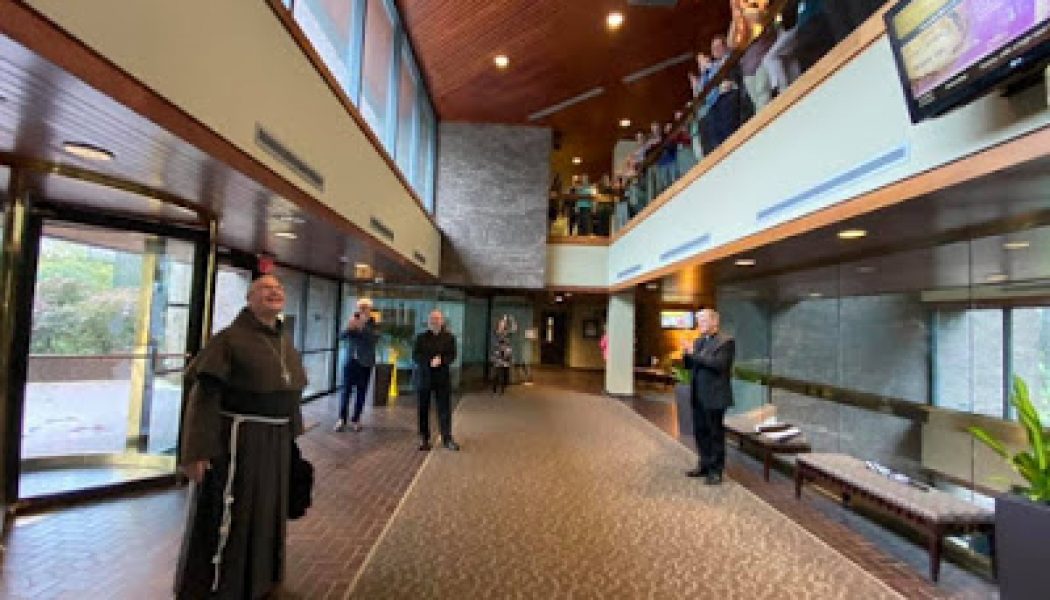 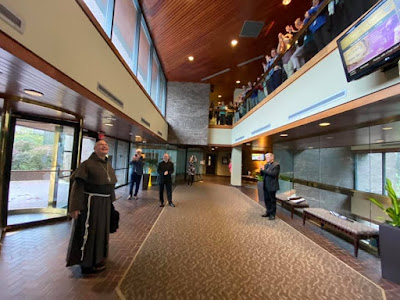 The clear frontrunner through practically the entire 10-month process, upon receiving the most prized appointment on the current US docket, Archbishop-elect Greg Hartmayer made his first appearance as the Pope’s pick for Atlanta just as he did on his debut in Savannah nine years ago: that is, clad in his Conventual Franciscan habit.

Here, fullvid of this morning’s relaxed “homecoming” at Smyrna Chancery – the second return of a popular local pastor to a high-profile Stateside post in as many months…

…and afterward, an exuberant welcome at the Cathedral Rectory, the former Archbishop’s Residence:

Keeping recent custom due to the 1.2 million-member archdiocese’s marked growth, Hartmayer’s installation – set for May 6th – won’t be in the Cathedral of Christ the King due to space limitations. While Wilton Gregory’s 2005 rites were held at the city’s convention center, this time they’ll take place at one of the Metro’s host of large new churches: the 1,500-seat St Peter Chanel parish in suburban Roswell. (In a further reflection of the dominance of the archdiocese’s suburbs – where some mega-parishes boast ten permanent deacons or more – the modest house the new archbishop inherits is likewise in a standard development outside the city.)

As for the reception, one of the elect’s confreres summed it up simply, saying “He’s a kind man.” As for the move’s provenance, meanwhile, much like Philadelphia’s newly-returned Archbishop Nelson Perez, the Atlanta choice is a palpable favorite of the Nuncio to DC, Archbishop Christophe Pierre, who’s now beginning his final year in office as his 75th birthday approaches next January, and has accordingly taken the docket into overdrive, with no less than six nods in the last week alone.

Having waited until the Southeast’s ad limina in mid-February to make his decision for the 404, with today’s appointment, Francis has now named a third of the nation’s 34 Latin-church archbishops, with two more pending – Anchorage (vacant since Archbishop Paul Etienne’s transfer to Seattle last April) and St Louis, where Archbishop Robert Carlson reached the retirement age last June. While Cardinal Seán O’Malley OFM Cap. likewise turned 75 last summer, he has been confirmed at the helm of the 1.9 million-member Boston church – the US’ fourth-largest see – for an open-ended period.

Ergo, after a relative drought of metropolitan picks, as many as four new Stateside archbishops could be in Rome in late June to receive their pallia from the Pope on the feast of Saints Peter and Paul. But as Hartmayer reportedly had a cruise booked over those days, well, there goes that.