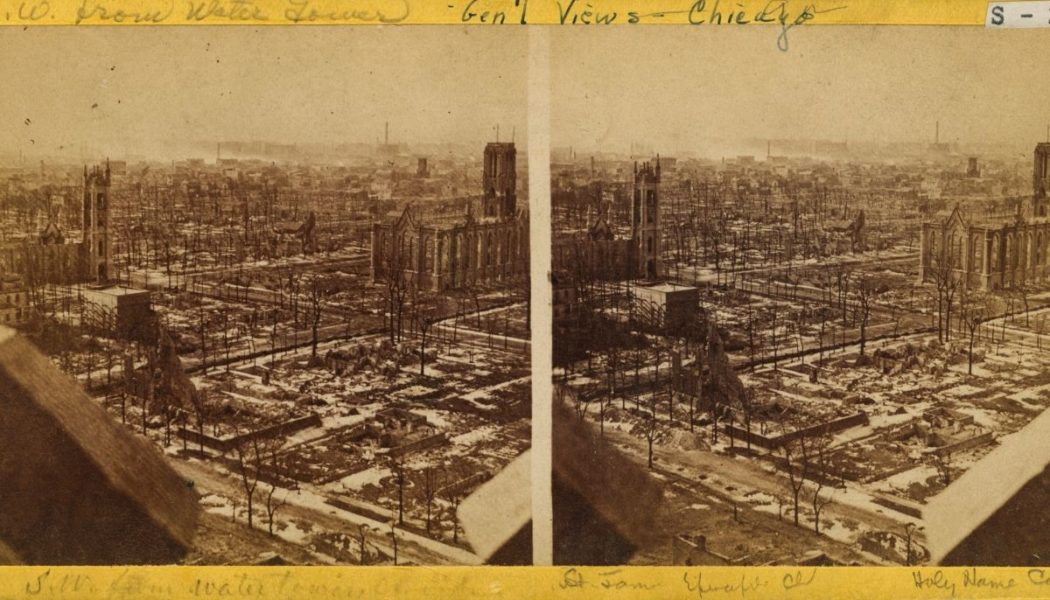 The conflagration burned through the Windy City Oct. 8-10, 1871. The same storm created a devastating fire in Wisconsin, too.

One hundred and fifty years ago the Great Chicago Fire broke out.

And the city’s cathedral was not spared when it was a parish church.

In “Chicago’s Cathedral,” the Register reported, “In 1871, the Great Chicago Fire claimed what was then Holy Name Church. Although it didn’t house the bishop’s chair, Holy Name often hosted official liturgies because it offered more space than St. Mary’s Cathedral. When the same fire destroyed St. Mary’s as well, Bishop Thomas Foley deemed Holy Name to be the site of the future cathedral.

“In the meantime, parishioners crowded into a makeshift ‘shanty cathedral’ for Sunday Mass. The crude wooden structure even utilized two doors from homes that had been burned in the city-wide catastrophe, reflecting the plight of so many neighborhood families.

It is important to note that the Eucharist was rescued from Holy Name  by Father John McMullen before the Blessed Sacrament could be harmed by fire.

Above and below are historic images courtesy of the Chicago History Museum.

Catholic edifices that were spared by the fire were Old St. Patrick’s (the oldest church in the city) and Holy Family Catholic Church, the parish of Irish immigrants Patrick and Catherine O’Leary, whose cow was rumored to have started the fire (but did not, as the city declared the next year). Three O’Leary children were baptized in the church, according to church history.

Holy Family Church has a beautiful story connected to Our Lady during the blaze, too.

As the story goes, Jesuit Father Arnold Damen was in Brooklyn on that fateful night After he heard about the fire via telegram, he invoked the aid of Our Lady of Perpetual Help and promised to create a shrine with seven candles perpetually lit in thanskgiving for her protection. The church was spared, and the pastor kept his promise.

Our Lady also aided the faithful in the Dairy State.

The weather conditions that created the blaze in Chicago also wreaked havoc in Wisconsin.

Catholic courage and prayer were also a hallmark there.

“Father Pernin managed to save the tabernacle from his church and carry it, while dragging his wagon to the river. In the jostling and bedlam, the wagon was pushed into the water and the tabernacle floated away. The next day it was found, resting upright and dry, on a log in the river — with the sacred species safe inside,” reported The Compass of the efforts of heroic priest Father Peter Pernin, a Canadian missionary serving as pastor at St. Mary in Peshtigo about the harrowing efforts amid the Peshtigo fire, the deadliest wildfire in recorded history.

The Compass described how the fierce firestorm exhibited “the power of a thermonuclear bomb.”

Southeast of Peshtigo, The Compass recounted what happened on the sacred ground of the National Shrine of Our Lady of Good Help.

Our Lady had been honored there since Mary appeared to Adele Brise in October 1859 in the only approved Marian apparition in the United States.

“Adele Brise and her companions at the chapel knew they could not escape the fire,” reported The Compass of the 1871 inferno. “So they took up the statue of Mary and bore it in procession around the grounds. They were joined by local people fleeing to the site. Father Pernin, in recording what Adele told him later, said they processed on their knees, praying the Rosary.”

“When the flame and wind blew so strongly in the direction of the chapel as to prevent their farther progress, unless they exposed themselves to suffocation,” Father Pernin wrote, as recounted in The Compass, “they awaited a lull in the storm or turning in another direction continued to hope and pray.”

“By morning, he continued, all ‘the houses and fences in the neighborhood had been burned with the exception of the school, the chapel and fence surrounding the six acres of land consecrated to the Blessed Virgin.’”