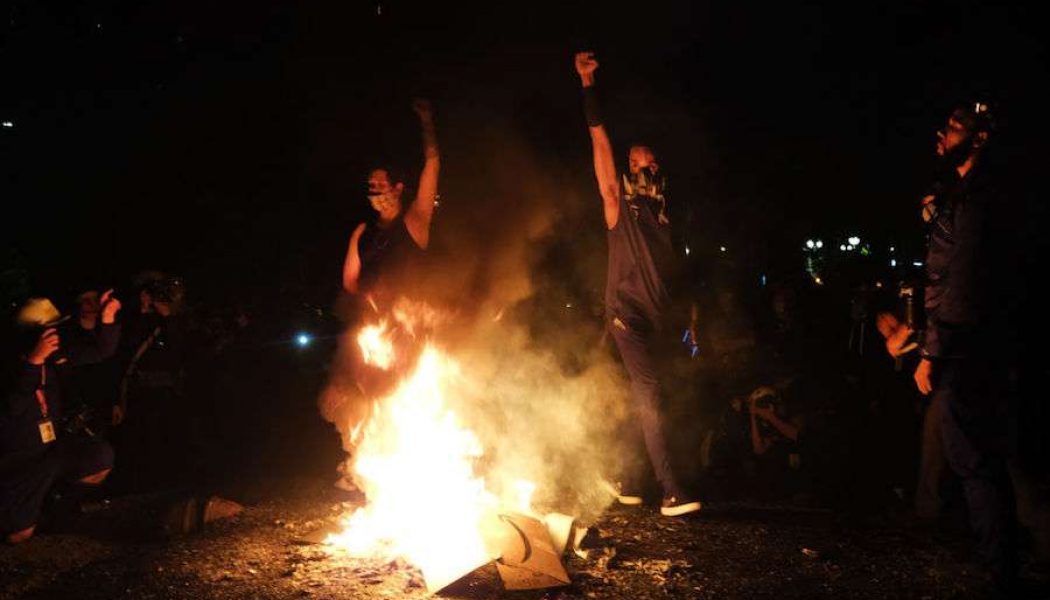 If you perused the news online on Saturday, Aug. 1, you could be forgiven for believing that large-scale Bible burnings— the kind perpetrated by the Nazis in the 1930s— were taking place in the apparently Godless streets of Portland, Oregon.

Dozens of news stories from Aug. 1 repeated a claim from a Malaysia-based journalist that “a stack” of Bibles had been consumed in a bonfire, built by protestors in the middle of the street.

But after more than a week of those stories, the pendulum has swung the other way. Spurred by an extensive analysis of the incident by the New York Times, many media outlets have begun to dismiss the reports of the Bible-burning incident as overblown and misleading; one outlet even labeling the story “Russian propaganda.”

So what’s the truth?

The evidence suggests that reports of a burning “stack” of Bibles were not accurate. But the Bible-burning incident was not completely fictional, and there is no evidence that what did happen was insignificant or meaningless.

Protestors burned at least two Bibles in the streets of Portland that night. A livestream filmed at the protest shows them burning. That fact is undisputed.

By Aug. 1, large-scale protests and riots had been taking place in Portland for over two months, protestors had set numerous fires amid the demonstrations. On July 26, police even reported that protestors had attempted to burn the courthouse itself to the ground.

The protests often have taken the form of crowds of hundreds of masked people protesting, ostensibly, against racism, police brutality, and fascism. Federal agents responding to the protests have garnered criticism for using tear gas and other forceful methods against protesters.

Some of the protests have been accompanied by riots and looting. In addition to extensive property damage in the city’s downtown, there have been incidents of violence within or adjacent to the protests, including shootings and stabbings.

Danny Peterson, a reporter for KOIN6, a Portland CBS affiliate, who was present at the Aug. 1 burning, told CNA that he personally only saw one book burned that night, and did not get a good look at its cover. He said multiple eyewitnesses told him that it was a Bible, and he reported that a Bible had been burned.

But the initial, widely-shared evidence for the Bible burning originated from a different source— a video released by Ruptly, a video agency whose sole shareholder is a non-profit organization controlled by the Russian government. (Warning: The video contains strong language.)

The Ruptly clip that went viral is a small, edited clip from a nearly five-hour livestream that the news agency posted from the July 31-Aug.1 protest.

The video caught mainstream attention after Ian Miles Cheong— a Malaysian journalist who is consistently active in American conservative political debates— retweeted the video with the caption “Left-wing activists bring a stack of Bibles to burn in front of the federal courthouse in Portland.”

Cheong’s tweet quickly made its way around the internet on Aug. 1, with such political figures as Texas Senator Ted Cruz and Donald Trump Jr. retweeting the video and adding their own commentary. Conservative sites picked up the story from there, almost all of them citing the Ruptly video.

In addition, several conservative commentators online repeated Cheong’s claim that the protestors had burned “a stack” of Bibles.

On the other hand, a NY Times’ Aug. 11 analysis claimed that the truth “was far more mundane”— the protestors had not burned “a stack,” but merely one or two single Bibles as “kindling to start a bigger fire.”

Pointing to the video’s source, and its framing, The Times’ analysis said that “the Portland Bible burnings appear to be one of the first viral Russian disinformation hits of the 2020 presidential campaign.”

According to the Times, Russia has for years been seeking to sow discord in the United States, in part, through what the Times calls “information laundering”— releasing stories and information through channels controlled by Russia, such as RT, which American social media users and news outlets then pick up and disseminate to their followers.

William Evanina, director of the National Counterintelligence and Security Center, said in a statement last week that according to U.S. intelligence, Russia has been seeking to denigrate Democratic Presidential nominee Joe Biden, who is seeking to unseat incumbent President Donald Trump in November and who has been publicly supportive of the protests.

For its part, CNA reported at the time that in the early morning hours of Aug. 1, protestors burned at least one Bible in a bonfire in the street. CNA’s source was the KOIN report, but the story mentioned Ruptly’s video in its reporting, while adding the caveat that the video was unconfirmed, and its source was a Russia-controlled news site.

A representative from Ruptly contacted CNA shortly after the story published, requesting that CNA change its characterization of Ruptly as “Russia-controlled.”

The representative told CNA that Ruptly is an “entirely commercially-run, international news agency” that is based in Berlin and “wholly independent of any government.”

But Ruptly’s sole shareholder is ANO TV Novosti, a non-profit organization funded by the Russian government, which the U.S. Department of Justice has designated as a Russian government entity. Information on Ruptly’s ties to Russia is readily available and widely known.

CNA asked the Ruptly representative whether its financial ties to the Russian government make the characterization “Russia-controlled” appropriate. The representative told CNA again that Ruptly is a commercial entity that answers its CEO and its editorial team, “which is made up of 42 different nationalities.”

“Their role in this capacity is to deliver top-quality, neutral reporting on a diverse range of news items from around the world, according to the demands of Ruptly’s clients,” the representative said in an email.

The representative declined to comment directly on the question of Ruptly ties to Russia.

Ruptly’s characterization and promotion of the video may be part a broader disinformation campaign. It was at least misleading and incendiary, not meeting ordinary ethical standards for journalism. But it is not the only storytelling that raises questions.

“A few protesters among the many thousands appear to have burned a single Bible — and possibly a second — for kindling to start a bigger fire. None of the other protesters seemed to notice or care,” the NY Times said.

But it seems clear from the videotape that whoever set the first Bible alight intended to make a statement. One protestor standing around the burning Bible removed her mask and blew on the flames performatively, making a show of warming her hands from the fire’s heat.

“Best use of a Bible ever,” an unseen voice comments as the flames rise.

As the first Bible slowly burns, another voice can be heard saying: “Hey, there’s more free Bibles over there.”

“We need another Bible,” another voice says a few minutes later. “Let’s keep this s*** going,” another shouts.

Protestors later added several American flags, newspapers, a pizza box, and twigs to the fire, and chanted vulgar slogans, including “F*** the Police.”

The Times’ analysis reports that “there [was] no discernible reaction from the crowd as the [second] book is put in the flames along with twigs and branches, notebook pages and newspapers.” This is not true.

As the second Bible is ripped apart by a masked protester and added to the flames, a voice on the videotape can be heard saying clearly “A Bible, yeah!” in approval. There are also several excited whoops, and even a cry of “Hail, Satan.”

Yellow-clad members of the group Moms United for Black Lives Matter went over to the fire and put it out with bottles of water and stamping around 1 am, according to the KOIN6 report.

A “stack” of Bibles was not burned in Portland Aug. 1. Nevertheless, Bibles were burned, and seemingly not by accident.

Whether “fake news” comes from Russia or from New York, misleading reports— whether exaggerating the truth, or downplaying it— are likely to intensify in months to come. Astute news consumers should be attentive to both.