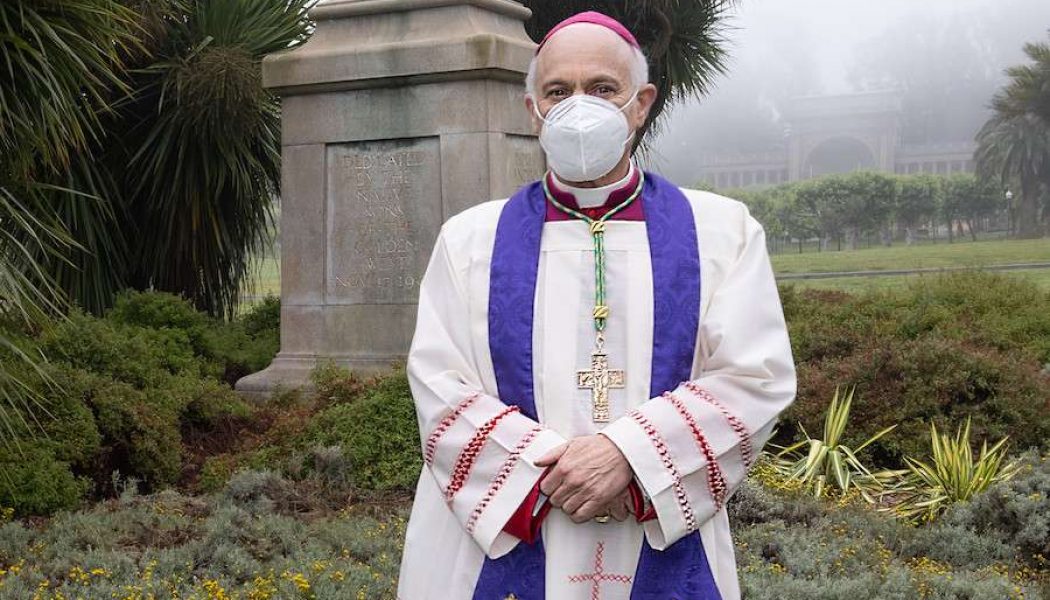 In a letter to San Francisco’s Mayor London Breed and other city officials, Archbishop Salvatore Cordileone on Monday called on the city’s secular authorities to, “at a minimum, remove the excessive limits on outdoor public worship.”

“Particularly for us as Catholics, attending the Mass and receiving the Body and Blood of Christ in person is the source and the summit of our faith, and we have shown we can celebrate the Mass safely,” Cordileone wrote Aug. 31.

Cordileone called the city’s restrictions on outdoor Masses “a serious deprivation of our rights as Americans under the First Amendment and our spiritual needs as people of faith.”

“San Francisco is the only government in the entire Bay Area that restricts public gatherings to 12 people out of doors. Ours and others’ faith is being treated as less important than a trip to the
hardware store, or a nice dinner out on the patio,” Cordileone stated.

Over the last 14 weeks, the doctors said, approximately 17,000 parishes have held three or more Masses each weekend, as well as daily services, combining to equal more than 1 million public Masses celebrated across the United States since shelter-in-place orders were lifted.

By following public health guidelines, these Masses have largely avoided viral spread. The doctors said in their article that there is no evidence that church services are higher risk than similar activities when guidelines are followed.

“One million public Masses without any [COVID-19] outbreaks demonstrates that it is just as safe in San Francisco as in other parts of the state, such as San Mateo County, to permit large gatherings for outdoor public worship with reasonable safety precautions,” Cordileone commented.

Some parishes in San Francisco, including the Cathedral of St. Mary of the Assumption, have been holding simultaneous outdoor Masses in order to adapt to the 12-person limit.

The City of San Francisco has been closely monitoring Catholic churches in the city and has repeatedly issued warnings to the archdiocese for apparent health order violations.

“Our intention has always been to conform to what we understand to be the City orders and timelines,” the archdiocese said July 2, noting that the city’s orders have been changing throughout the pandemic, sometimes on short notice.

In a July 30 memo, Cordileone exhorted his priests to be as diligent as possible in bringing the sacraments to their people, including celebrating outdoor Masses each Sunday, and providing Confession in a safe manner as often as possible.

“Please regularly remind people to follow the safety practices necessary to curb the spread of the virus. This is real, it is dangerous, and it has to be taken seriously,” he added.

“The resurgence is due in no small part to people becoming lax once the shelter-in-place rules began to be lifted. Please urge these practices upon them; absolutely do not give them the impression that the coronavirus is not a serious threat to the physical health of our community.”

Cordileone has pointed out that the city has allowed retail stores to operate at 50% capacity during the same time period that Christians are prohibited from gathering in their churches, even with masks and social distancing in place.

San Francisco has seen numerous street protests in recent months, including one in late June that resulted in the destruction of a statue of St. Junípero Serra by a crowd of about 100 people.

“With regard to outdoor services, you are all well aware that pre-planned and scheduled street protests have been allowed to continue unhindered, while the limit of no more than 12 people still applies to everyone else, including us,” he continued.

“Yet here again, an outdoor worship service is a much safer event than a protest, since the people are stationary, social distance is respected, and the participants are wearing masks.”

The Benedict XVI Institute for Sacred Music and Divine Worship, which provides liturgical resources in the archdiocese, shared a petition Aug. 31 in support of Cordileone’s statement calling for the lifting of restrictions on the Mass.