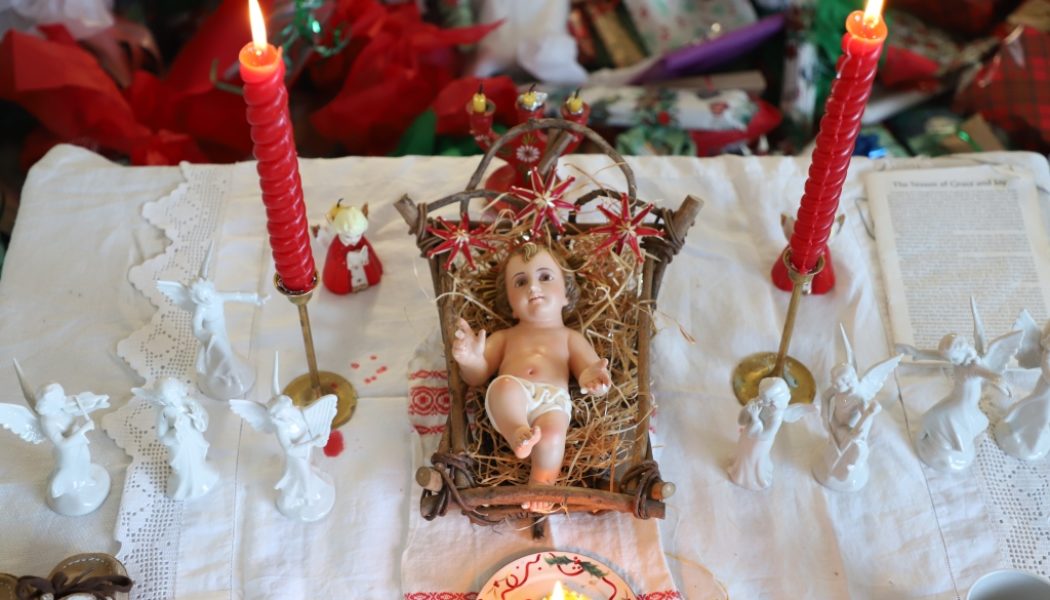 Lion: Well, that is quite a mouthful! And, if I might say, a rather melancholic opener for the fifth day of Christmas!

Ox: Yes indeed, what does Heraclitus have to do with the spirit of Christmas?!

Lion: Too much eggnog?

Thank you my friends, I am quite well. My thoughts are merely provoked by the passing years and the changing circumstances that attend the mere fact of living in this mortal sphere. Yet there are some things that remain the same else where would we be? Some things must remain permanent for us, and, as I was suggesting, there is a powerful permanence in the Catholic traditions that surround our major feast days.

Lion: Ah, I see. Langley is alluding to his recent move from the lush green North East to the rather arid Martian climes of Colorado.

Lion: Yes- Martian. The soil is red just like it is on Mars.

Lion: My apologies Ox. I didn’t realize this was a sensitive subject. I was only referring to the reddish color of the earth. I suppose the very name “Colorado” has something to do with this?

Ox: Yes- but that is as far as the comparison goes Lion….

My good friends, excuse me, but I merely meant to make a comment about the importance of Catholic traditions in establishing human identity and reminding us of where our permanent home is. I will admit that my family has experienced some momentous changes in the recent past, and that has made me more reflective on the reality of change itself. Yet some things remain the same and, most importantly, those are the things wherein Christians find their identity! Without these things – these permanent spiritual realities so beautifully reflected in the physical traditions-or rather enfleshed and concretized and instantiated in the simple beautiful traditions that surround the Faith- I say without these things then where would we find ourselves?!

For example take the simple matter of these delicious Baby Jesus buns! Nothing says Christmas Morning better than these soft scrumptious buns with a cream cheese filling! Together with a rich hot cup of coffee (freshly ground coffee mind you!) freshly ground from a medium roast whole bean! (I enjoy the Kirkland Home Blend even if it was roasted by Starbucks!)

Now in addition to those Baby Jesus buns, my wife makes a cheesy Egg Strata, with fresh Iowa sausages bestowed upon me by an overly grateful student as an appreciation for her class with me reading Herodotus! Now, these sausages were delightful and, as I learned, came directly from her mother’s family’s farm. Apparently, this family has raised pigs for generations and as a newcomer to the western regions of the country, my family has now become a beneficiary of the cultivation of the most delicious sausage ever!

Now every Christmas morning the question arises concerning the right Cava to employ in our Mimosas. This year we chose M. CHEVALLIER CARTE NOIR CAVA BRUT which I recommend for two reasons: 1) it is inexpensive and therefore one does not mind mixing it with orange juice 2) it is Brut! which signifies that it is dry- surprisingly and counterintuitively dryer than the sparkling wine that advertises itself as “Extra Dry” Apparently “Brut” means dry – nonetheless one would have thought a sparkling wine or Champaign advertising itself as extra dry would in fact be drier. But again, this is simply not the case. In my opinion one should only purchase a sparkling wine, Cava, or Champaign that advertises itself as Brut!

We keep the ingredients unmixed until they are combined in the glass according taste.

Now, that fruit salad is essential on Christmas morning is self evident. But it is also nice to have a few berries to throw into one’s mimosa. This year something happened to the price of strawberries. They appeared to be roughly double the cost that I am used to. Fortunately, raspberries seemed to be more than reasonably priced as were the pineapples!

It’s always tough fitting everyone around the table, but fortunately my wife’s father built a couple of strong wooden benches that do the trick. There is just no way to fit sixteen or seventeen people around a table without benches.

The more the merrier!