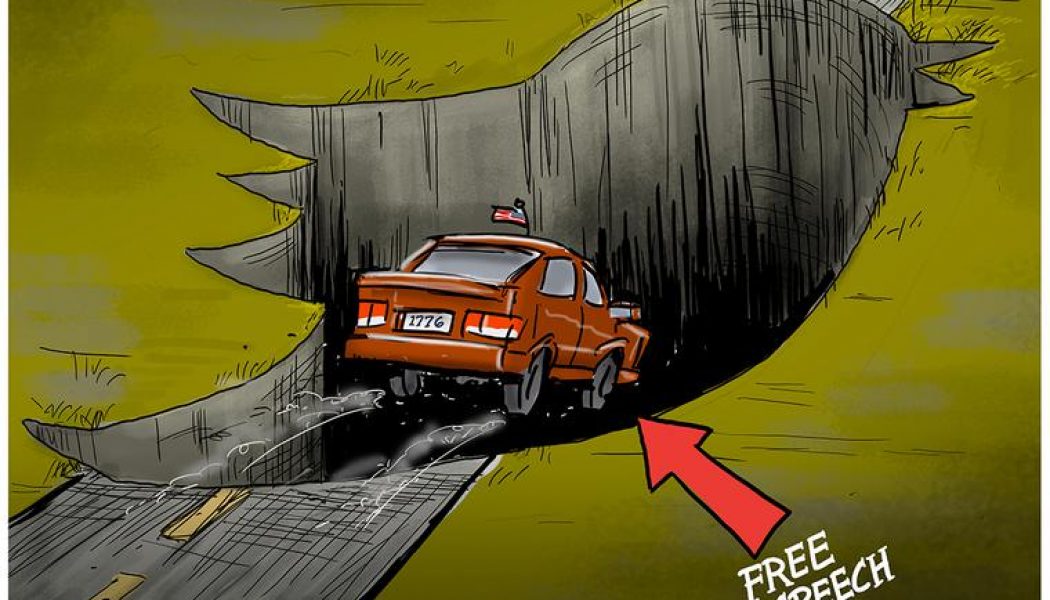 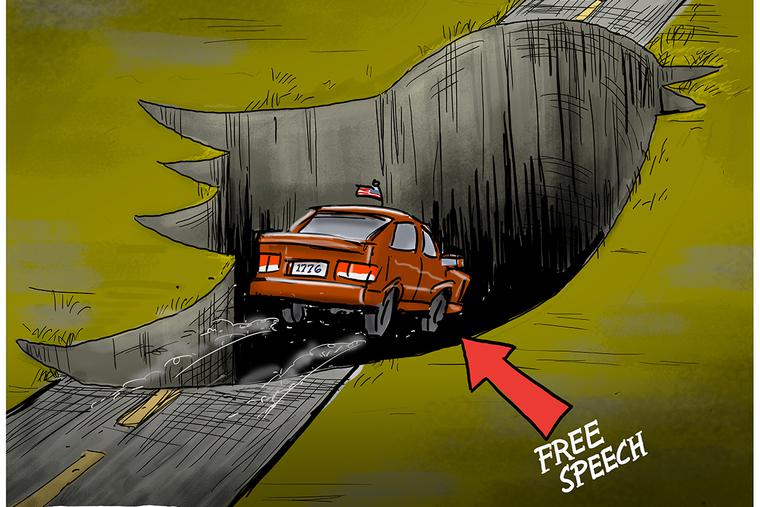 As a Gospel-believing, unborn-baby-loving, traditional-marriage advocate who will tell anyone and everyone that there are two sexes and only two sexes, I’ll admit it’s gotten a little embarrassing that I haven’t been kicked off Facebook yet.

It’s starting to make me look bad. In fact, I’m starting to wonder if this may work against me getting into Heaven. To be fair, the ad for my pro-life novel American Antigone did get banned during the election but that’s not nearly as illustrious as personally getting kicked off.

The 2020/2021 Big Tech purge has been historic and I’m feeling left out. All across the large social media platforms, users guilty of wrongthink have been censored, shadow-banned or demonetized.

Many times over the past year I’ve logged onto social media and a “friend” announces “I’m back!” They explain they’d been banned by Big Tech for three days or a week. I usually “like” their post and maybe comment by welcoming them back with a snarky remark about the state of cancel culture. But the truth is, I most likely hadn’t even noticed they were gone. It makes me wonder about the sorry state of the term “friend” in our culture.

But you have to admit, taking in social media sites can be like drinking from a fire hose. It’s overwhelming. It’s not that I don’t care about these people I interact with, because I do. I’ve prayed for many of them in times of need. I’ve donated to some GoFundMe campaigns. I’ve argued and laughed with many. But it isn’t the same. Big Tech makes up for lack of depth with sheer overwhelming numbers. We end up skimming humanity rather than spelunking into each other’s lives.

And I’m no theological expert but that doesn’t seem to be exactly what we’re called to do. That’s not what I hoped to do when I began blogging 15 years ago.

Fifteen years ago Catholic blogging started with all the hope and ambition of a new evangelistic movement. We were all on fire. Never had Catholics been given such a tool. Imagine what the Twelve Apostles could have done with such a thing as the internet. Google is much better than sandals for reaching out to the world. St. Ignatius of Loyola? St. Francis of Assisi? Eat your heart out! We were set on exposing the world to Catholicism digitally. Our stories of saints, doctrine and personal testimonies would be flashed across the globe with the speed of prayer. Hearts would be moved. Souls would be saved. “St. Blog’s parish” was the moniker given that seemed to stick.

Hundreds of Catholic blogs filled the sidebar of my blog, Creative Minority Report. I’d scroll through and see which ones were updated and read their take on the world or some thorny theological question. But it was mostly one-sided. You put your thoughts and stories out there. If you left a comment on someone’s site or asked a question, much of the time it took hours or days for them to respond.

Then came Facebook and Twitter. Instant reactions. Many Catholic bloggers were enamored with the interactive nature of it and spent more time there. The immediacy of these sites intrigued us all. So instead of having to visit a dozen different sites, you just had to click on one site and interact with… everyone. All on one site. The world spilled right onto your lap.

Blogs were outdated and many were left unused. Immediacy was king. Long thought essays were eschewed for hot takes and instant reactions.

We all ran into our pen. We all rushed into our virtual communities.

And it wasn’t just blogs that were abandoned. Our real lives were abandoned. Whereas before, people joined actual groups in actual real life — like their parish Rosary Society, a Bible study group or the Knights of Columbus. Now they belonged to a dozen or more virtual groups and many of those community groups simply vanished. The impact of this will be felt for years.

But we hardly took notice. We were too busy skimming. We eschewed deep interaction for likes. And here’s the thing: “likes” aren’t love.

And that was the problem. Instead of changing the world with the gospel, the world came spilling in and changed us.

The great promise of the internet we all chased was that we were all equal. What one person said was equal to what a Pulitzer-winning journalist said. But in reality, some were still more equal than others, and instead of promoting equality, Big Tech just promoted conformity.

The culture’s powers dominated the culture-dominated internet. Mainstream media, academics and the entertainment industry grew in strength. Catholic writers didn’t have to be shouted down because, left to our own devices, Catholics tore one another apart online. We argued over everything. Accusations that you weren’t Catholic enough, or that you were more Catholic than the pope, popped up everywhere.

The 24/7 nature of the internet rubbed our nerves raw. It was Sartre’s “Hell is other people” writ large. We even fought with people who agreed with us. It seemed like we were suffering a nationwide case of cabin fever.

All the while the liberalization of America that began in the 1960s sped up. The opinions and worldview of secular leftists, who seemed to dominate the mainstream media, academia and the arts, were mainlined into the veins of every American with earbuds and a smartphone. The left almost instantly became mainstream and wielded a cudgel of cancel culture. If you said something wrong, anything wrong, you might get shouted down, ratioed, or canceled. People might even tweet your employer and threaten a boycott. So guess what happened? People started shutting up. Many Catholics got skittish.

They thought, “I’ve got three kids. I’m not going to risk their future just because I want to talk about abortion or marriage online. I’ll just shut up.”

And that’s how the left won the internet.

And Big Tech wasn’t exempt from threats. If they themselves didn’t cancel those deemed guilty of any offense, including simply being an orthodox Catholic, then they too would be shouted down. Companies quickly understood the lay of the land. If you angered the left, you’d be shouted down, canceled or boycotted. Mainstream media might very well focus on you and make your slip-up their story of the day. On the other hand, if you angered the right, what happened? Virtually nothing.

This is how the internet was weaponized. Soon, anyone who disagreed or was guilty of wrongthink was shadow-banned, demonetized or censored, so even those who did speak out weren’t heard. You might have 10,000 followers on Twitter but if you talked about being pro-life or supporting traditional marriage or anything considered vaguely conservative you were lucky if one out of 10 of your followers actually saw anything you wrote.

The shadow-bans were followed by actual bans. First, it was people like Alex Jones. But many people thought of him as extreme so they shrugged it off. Milo was next. So when he was kicked off YouTube and other sites, it too was met with a shrug.

When nothing happened, this only emboldened Big Tech, which seemed only too happy to ramp up their efforts. The 2020 election was when it became so obvious to everyone that it could no longer be denied. The New York Post was blocked from sharing a story about President-elect Joe Biden’s son. Big Tech had gone from blocking Alex Jones to blocking the oldest newspaper in America for political reasons.

I believe that moment served as a wake-up call for many. There is no one who can avoid being canceled, banned or kicked out. No one. Recently President Trump was kicked off Twitter and when many on the right went to Parler, a Big Tech conspiracy unfolded right before our eyes. Google and Apple removed the site from their app stores and Amazon pulled the plug on its web-hosting service. So Big Tech didn’t want us — but they didn’t want us to go anywhere else either.

So where do we go now? What do we do? We’re not truly welcome in the world of Big Tech, and their legitimate competitors are squashed. I’ve read that some people are hoping Congress looks into their status as illegal monopolies but that seems highly unlikely.

So what do we do? You can stay in your pen. Don’t say anything too countercultural and hope that Facebook isn’t noticing you. But eventually, they will notice you. If you speak about your faith in a meaningful way that doesn’t jibe with leftist doctrine you will eventually be noticed. And then God help you.

So you can wait your turn or you can help rebuild. Starting now, we should should re-engage with the actual world. We should join our parish groups again and engage with our community — our actual, real-life community.

I’m not saying we should logout from Facebook or Twitter completely. But I also think blogging your well-reasoned thoughts or sharing your real-life experiences is far better than hot takes. A blog post can go in depth whereas a Tweet is so limited. With social media, even our thinking gets shortened into slogans. When you write a long piece it forces you to actually engage with what you actually think.

Perhaps it’s just me, but when I go to someone’s blog and read their stories, I feel more connected. I recognize their humanity. I’ve recently returned to blogging in a more disciplined manner. I don’t think returning to blogging is a step back. We must accept that it’s possible to take a wrong turn. Just because it’s the most recent wrong turn doesn’t mean it’s progress. Let’s just admit we made a wrong turn.

I think the important thing going forward is we must stick together. We must interact in meaningful ways. We must make “friends” friends again. We must stand up for one another and not simply be grateful that it’s not you being canceled. Don’t be afraid to speak the truth.

And if “speaking the truth in Christ” (Romans 9:1) eventually gets us all canceled, so be it. Someday, when we’re communicating with each other in heaven, Big Tech will be small potatoes indeed.