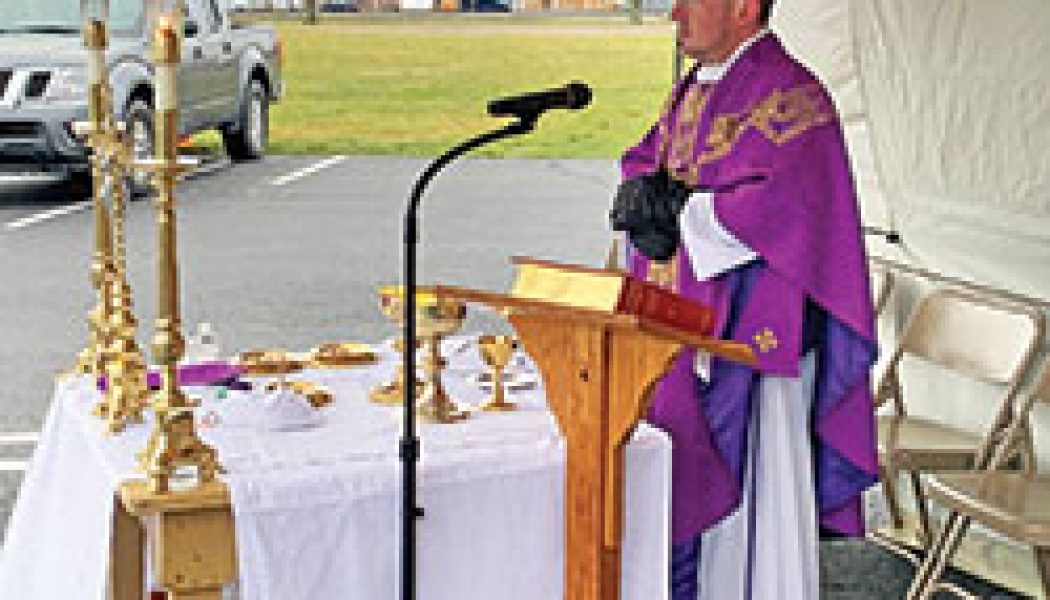 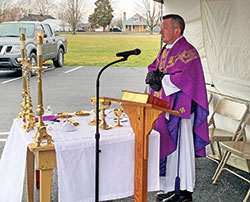 Father Shaun Whittington celebrates Mass on March 15 under a tent in the parking lot of St. Anthony Parish in Morris. The Mass was broadcast over a low-power FM transmitter to parishioners joining him in prayer in their cars. The pastor of St. Anthony Parish as well as St. Nicholas Parish in Ripley County, Father Whittington offered parking lot Masses in his faith communities to make the Eucharist available to his parishioners in a way that would prevent the spread of the coronavirus. (Submitted photo)

As a pastor, Father Shaun Whittington wanted to keep the Eucharist available to the people he ministers to at St. Anthony Parish in Morris and St. Nicholas Parish in Ripley County in the midst of the growing national outbreak of the coronavirus, also known as COVID-19.

But as a volunteer emergency medical technician in the Sunman Area Life Squad and fireman in the Sunman Rural Fire Department, two longtime interests of his, he was well aware of the potential danger of the illness and wanted to do what he could to limit it spreading.

A couple of days before Mass was to be celebrated at his Batesville Deanery faith communities on the weekend of March 14-15, Father Whittington and some college friends visiting him brainstormed to find a way to bring these two goals into harmony.

“My thought was to think outside the box,” Father Whittington said. “There had to be a way to leverage modern technology so we could do both.”

They eventually settled on the idea of a parking lot Mass at the parishes that would be broadcasted over a low-power FM transmitter, which worshippers could hear and pray with while sitting in the privacy of their cars with an appropriate distance from others attending the liturgy.

One of Father Whittington’s parishioners had an FM transmitter that could be used. Its signal only reaches to the edges of the parishes’ parking lots.

Others stepped up quickly to volunteer as parking lot attendants and others as extraordinary ministers of holy Communion that would be needed to distribute the Eucharist to people in their cars. A tent was set up in St. Anthony’s parking lot for an altar and ambo. A portable concession stand with large side windows was placed near St. Nicholas’ parking lot for the same purpose.

Parishioners learned of the new Mass arrangement through the online Flocknotes’ message system. And parking lot attendants handed out bulletins and an instruction sheet as parishioners arrived in their cars.

“Everybody just stepped up and said, ‘OK, let’s figure out how to make it work,’ ” Father Whittington said.

Temperatures were in the lows 30s for the first Mass on Saturday evening at St. Anthony.

“It wasn’t exactly the best weather to start this the first time,” Father Whittington said. “But it was awesome to have Mass knowing that my parishioners who were there were practicing good hygiene, staying separated from each other and in the warmth and comfort of their own cars, knowing that they were going to be safe from the elements and potentially safe from the virus.”

Paul and Norma Newton, members of St. Nicholas, are in their 70s and have health challenges that put them at a higher risk of contracting and suffering from the coronavirus. They appreciated the efforts of Father Whittington and members of both faith communities to make the parking lot Masses possible.

“Had it not been for the arrangements at this Mass, we would not have been able to attend Mass,” Norma said. “Watching Mass on TV would not have been the same. Being in person with a priest, being able to receive the Eucharist, and worshiping together was the best.”

The members of St. Anthony and St. Nicholas parishes are also looking out for each other—especially parishioners who are in high risk groups, such as the elderly.

“I have parishioners who have offered to do errands, pick things up, go to the grocery store,” Father Whittington said. “All they have to do is call the parish office or call me on my cell phone. That’s what we need to do as a faith community. We need to care for each other … in a time of need.” †