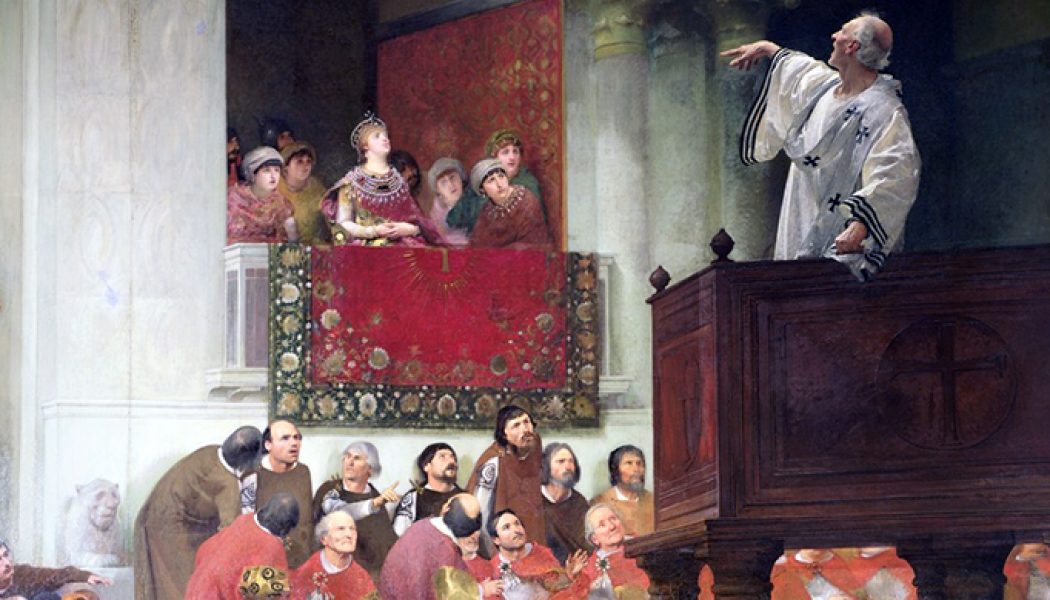 COVID-19 has helped highlight the gap between the methods of modern communication available to the Church and their pitiful use in practice.

The episcopal shutdown of public celebration of the Mass in the United States has put focus on what might be called “palliative pastoral care” to address the faithful’s inaccessibility to “the source and summit of the Christian life” (Lumen gentium, 11). One of the ways in which that care has been offered is through online Mass, whether live-streamed or recorded. Many bishops have recommended that Catholics avail themselves of those online opportunities, both to provide some kind of connection to the Mass as well as retain the particular character of Sunday. At the same time, they have noted that “TV Mass” is no substitute for Mass in which the “active participation” (Sacrosanctam Concilium, 14) of the faithful takes place.

Prescinding from the wisdom of the bishops’ decisions and concurring that online or televised Masses can only be emergency substitutes in the present situation, let me draw a lesson I hope the Church takes to heart in the post-contagion period: the necessity of clerical training in modern communication methods.

Even before the COVID-19 pandemic, it took no great researcher to discover that many Catholics remain dissatisfied with the quality of Sunday homilies. Catholic preaching has long been contrasted (unfavorably) with its Protestant and Jewish counterparts. Over many years, I have personally listened to homilies that were either poor paraphrases of the Scriptures the congregation just heard, canned texts read aloud or stream-of-consciousness trips on personal tangents. The common governing criterion often seemed to be: don’t exceed 8-10 minutes.

Four weeks of online Masses amplify some of those problems. Today I watched a celebrant read his homily to us. The homily was actually solid. But the very nature of an online or televised Mass necessarily accents the visual. Even if tonsure had not been eliminated back in 1972, six minutes of the priest’s bald patch would still not be the best visual.

I applaud my pastor, Msgr. Paul Scalia of St. James in Falls Church, Virginia, for his pastoral use of social media. Every day we receive an email that not just bucks up people’s psychological spirits, but provides useful pastoral support, whether it be opportunities for adoration (with a link to sign up to maintain appropriate physical distancing in church), the Divine Mercy novena, or confession times. Maintaining the parish’s normal Mass schedule (intentions have, after all, been offered for those Masses), each Mass is livestreamed from the rectory. At least once a week, he and one of his vicars get together online for some theological ramblings that represent good adult education.

I applaud my pastor. I also wonder why every pastor is not doing the same?

Social media streaming and chats are not novel. They are rather mainstream in today’s world, i.e., the world outside the Church. Perhaps many pastors don’t know how to set this up. Well, we baby boomer parents who are technologically challenged usually handle the problem by asking the teenager in the next room how to do it. They usually come with a semi-condescending look at their Luddite parent, click four keys, and eventually lead us into how to do this for ourselves. Looking for youth ministry engagement, Father? Talk to some teenagers in your parish!

My purpose is not to be critical, but to paint in stark relief the gap between the methods of modern communication available to the evangelization project versus their pitiful use in practice. Of the 16 documents of Vatican II, many commentators have long opined that the most “dead letter” of them is Inter Mirifica, the Decree on Media and Social Communications. Without delving into the content of the document itself, my point is simply that we Catholics don’t really use media and social communications very well.

Which leads me back to training.

When I was an associate dean at Seton Hall’s School of Theology, we undertook an attempt to hire a full-time professor of homiletics. As central as preaching is to a priest’s ministry and the most common context in which he touches peoples’ lives it amazed me that, although we required some kind of speaking or preaching course in each of the four years of major seminary, they were all taught by adjunct faculty, i.e., part-timers, usually parish priests, who signed up to teach the course. Nor do I think our situation was unique among Catholic seminaries.

The problems with this approach should be obvious. First of all, there was little continuity. Instead of Preaching Year III building on Preaching Year II, one suspects each semester was self-contained, “start from the beginning” endeavor. Not only was the subject matter therefore discontinuous, but so was the students’ development: Father X did not necessarily know either what Father Y had taught or what he told Seminarian Z to improve his preaching.

And, on top of it all, all the courses assumed the priest’s role as primarily oral and live. Year I, “Public Speaking,” was exactly that: a course about speaking in public that was once a staple but now an infrequent component of undergraduate curricula. Years II, III and IV were all “Preaching Practica,” i.e., homiletics.

As COVID-19 has demonstrated, however, priests need visual as well as oral skills. Just as speaking sets certain “ground rules” (e.g., be audible, don’t mumble, keep in mind where the microphone is) so does being on camera (e.g., keep in mind where the camera is and what is being seen through it). Those requirements need to be taught, but the focus of a traditional “speaking” or “preaching” course may not consciously take them into account.

Nor does our traditional training really reckon with the pastoral outreach that written communication — not just online — affords. Today’s pastors are e-mailing their parishioners (hopefully with more than “you can send your Sunday collection envelope via Paypal”). Many pastors have their own Sunday bulletin columns. But how do we teach “Pastoral Writing?”

I tried to address the problem by hiring a full-time professor of homiletics. I asked for professional credentials in preaching. The experience (admittedly 20 years ago) was eye-opening. I got 15 applicants: 11 Protestant ministers, two rabbis, a nun, and a priest from another diocese across the country.

It seemed ideal that future priests be trained by a priest with professional training in preaching, but it also seemed that future priests ought at least to be trained by a priest who preaches. But a priest professionally trained in homiletics represented but 7% of the applicant pool. I think one can see why perhaps we have problems with Catholic preaching.

What lessons will be our takeaways when the scourge of COVID-19 recedes? One of them, hopefully, is not returning to the status quo ante. The Church’s need to be present in social media should be painfully apparent. Online Masses can continue to have a place, e.g., if we really take seriously everything we say about the “parish community,” then perhaps every parish ought to livestream its principal Sunday Mass so that parishioners who cannot “actively participate” in that physical community (e.g., the sick and homebound) remain connected to it. But that means that the “communications training” of the future priest is not just behind an ambo and before a microphone, but in front of a camera, keyboard and computer.