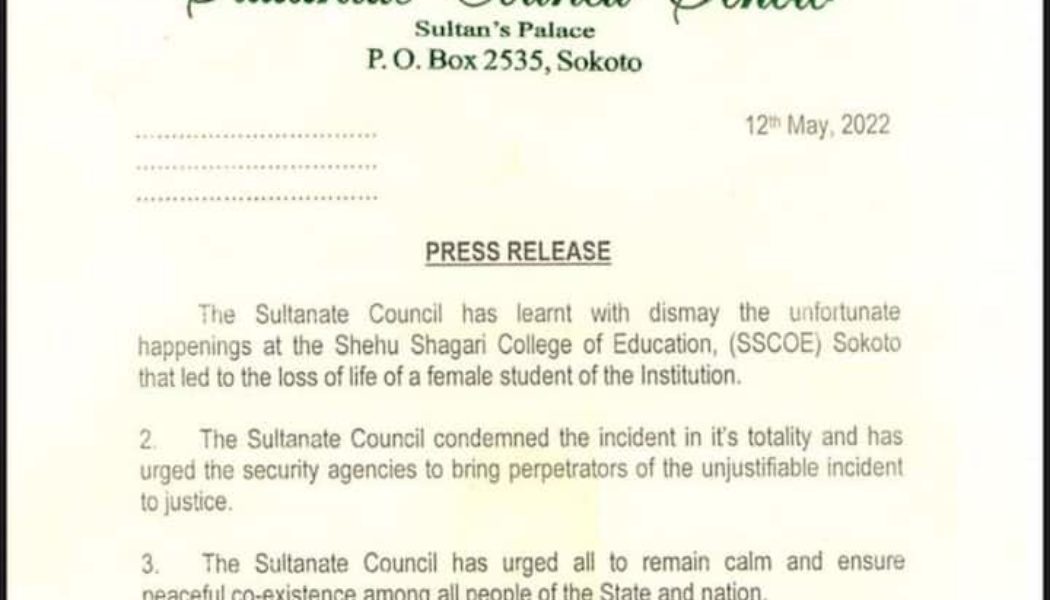 Deborah Samuel was a 19-year-old Christian from Tungan-Magajiya in the Rijau Local Government Area of Niger State. She was in her second year studying home economics at the Shehu Shagari College of Education, Sokoto.

Four days ago, Deborah was killed by a mob of her Muslim classmates who claimed she had blasphemed against the Prophet Muhammad. A video of this religious execution circulated online and sparked debates across the country on the limits of religious expression and why this murder was not being called a murder. Here’s everything we know so far.

On Thursday the 12th of May 2022, Deborah Samuel was stoned, flogged and burnt to death in Sokoto after posting a message on the class group chat. According to a coursemate of the deceased, Deborah had been asked how she passed their examinations from last semester. Her response was “Jesus o.” Three of her classmates didn’t take too kindly to the religious response and requested that she retract the statement. Eventually, word got to Deborah’s close friends on some Muslim boys who took the matter more seriously than expected, and they also tried to persuade her to retract the statement, but Deborah was unwavering. Her response to the request was this voice note. Here’s a translation in English:

“Holy Ghost fire! There’s nothing that will happen to us. Everything they’re pushing to us is rubbish. It’s not like they created the group to send reasonable information. If there’s a test, or an assignment, they should put it on the group, not the rubbish they’re sending. No be only prophet.”

Those were the words that led to the undeserving retaliation from her classmates and cheers from observers as she lay dying.

What are the police doing right now?

According to the police command’s public relations officer, Sanusi Abubakar, at about 7 a.m., a distress call was received from authorities at the Shehu Shagari College of Education. In response to the alleged call, the Deputy Commissioner led a team of policemen and operational commanders to the scene of Deborah’s death. Things were brought under control and, according to Sanusi, two suspects were arrested at the scene of the crime.

The school was also shut down in line with efforts to carry out an investigation of the incident. In response to the violent outburst, Sokoto’s Commissioner of Police, Kamaldeen Okunkola assured that all faces recognised in the viral video shared will be reprimanded according to national laws.

What are religious authorities saying on this matter?

While the Sultan of Sokoto condemned the horrific acts by Deborah’s classmates, the incident has sparked debates on what course the law will take in response to this crime. On Saturday, supporters in Sokoto set out to demand the release of the apprehended suspects from the scene of Deborah’s death.

The Muslim Rights Concern (MURIC) has appealed for calm in Sokoto and requested for demonstrators to respect the Sultan as the leader of Muslims in Nigeria. However, sources in Sokoto reported that major roads were shut down with shops and churches burnt, as youths rioted for the release of suspects arrested on Thursday. The Imam of the National Mosque in Abuja, Prof. Ibrahim Maqari shared this tweet on Thursday, a few hours after Deborah’s death.

The tweet led to comments from Nigerians questioning the views of the Imam and the seeming consideration for Sharia law over judicial court procedures.

These online discussions were linked to Section 204 of Nigeria’s Criminal Code entitled “Insult to religion”. The section states:

Any person who does an act which any class of persons consider as a public insult to their religion, with the intention that they should consider the act such an insult, and any person who does an unlawful act with the knowledge that any class of persons will consider it such an insult, is guilty of a misdemeanour and is liable to imprisonment for two years.

While the question of lawful proceedings to take currently remained unanswered, the president of the Christian Association of Nigeria (CAN), Samson Olasupo Ayokunle, has requested for all church leaders to organise a peaceful protest on the 22nd of May 2022 to demand justice for Deborah.

The Kaduna State Security Council has banned all religious protests until further notice for security reasons as many fear a spillover of the violence in Sokoto. After the protest on Saturday, the Sokoto State Governor, Aminu Waziri Tambuwal declared a 24-hours curfew in the Sokoto metropolis. It’s unclear whether this state of emergency will be extended at this time.

President Buhari released a statement 24 hours after the viral video of Deborah’s death was released.

After the tweet, his comment section was flooded with Muslims, particularly in Sokoto, threatening his prospects of winning electoral votes in the north. Succumbing to the angry threats, the tweet was deleted by Friday.

Nigerians took this as an act of hypocrisy and subtle support for the actions against Deborah, but Atiku clarified that the tweet was taken down because it wasn’t approved by him. He further assured Nigerians that he is not afraid to take a stand against Sharia laws, but requires consent for such tweets to be on his official page.

For now, there has only been a video of scenes from Deborah’s burial in her hometown in Niger. It’s unclear what legal actions her family is taking at this time, or if there are more suspects being investigated for her murder in Sokoto.

Editor’s note: Zikoko is including a fundraising link within this article for the family of Deborah Samuel. Funds will be delivered directly to the family via bank transfer. We will not be determining what they do with the money, but only ensuring that they are not in financial difficulty at this time of great tragedy. They may wish to use it to access therapy, fortify their security, move, take care of burial/commemoration, and meet other needs. For transparency, we will work with TechHer who will verify the amount collected, and ensure that 100% of the money is transferred to the family.”