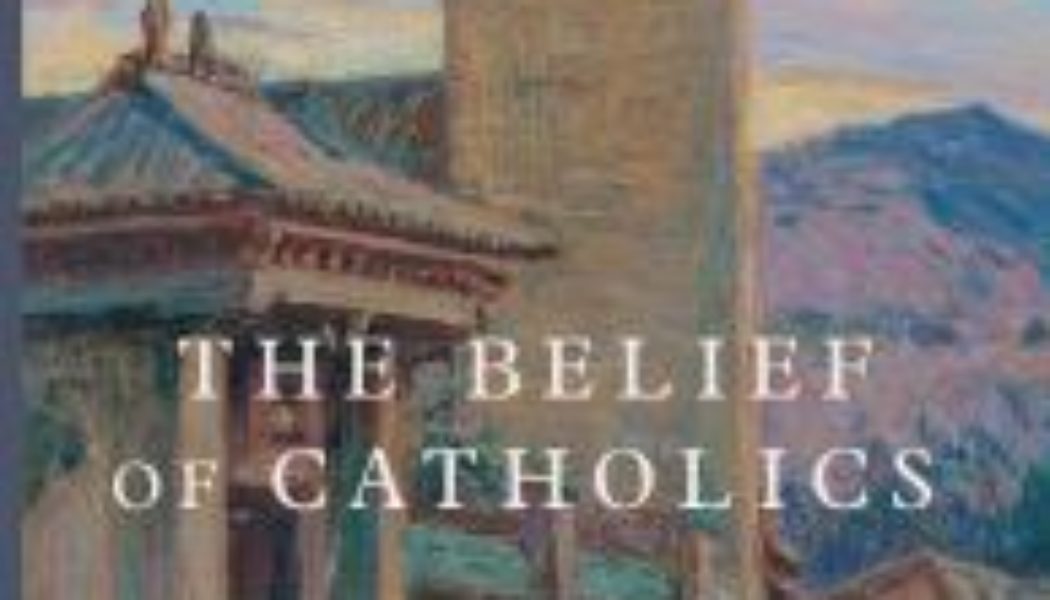 Ronald Knox is a spiritual master whose value is not found in a “verbal fireworks show that will wow you” but preaching “utterly useful to one attempting to live Christian life.” For that reason, it is a delight to see that Cluny Media has republished two of his classics. Taken together they provide a kind of brief guide to the Christian life.

Ronald Knox is a spiritual master whose value is not found in a “verbal fireworks show that will wow you” but preaching “utterly useful to one attempting to live Christian life.” For that reason, it is a delight to see that in 2022 Cluny Media has republished two of his classics: his 1927 apologetic work, The Belief of Catholics, and the 1948 walk through the Roman Rite liturgy, The Mass in Slow Motion.

The first work I read many years ago when I had already become a Catholic. I found it eminently commonsensical, with a sly power of influence on the way in which I thought about some of the questions. Sly, because if Msgr. Knox did not use verbal fireworks, he always had a way with phrases that managed to capture his explanations. On the difficult belief in the two natures of Christ: “Every possible substitute for the received doctrine has been tried, and found wanting.” Concerning the belief that the sacrament of Baptism conveys the stable gift of power to believe what God has revealed even on one who has already intellectually concluded that Christianity is true, he summarizes, “The water of conviction is changed into the wine of faith.” Concerning the difference between Christian prioritization of evangelization and the modern prioritization of social reform: “Our work is to colonise heaven, theirs to breed for Utopia.”

Indeed, there is no Utopian dreaming as part of Knox’s own apologetic. He defends the Catholic Church’s claims but without attempting to brush over the sometimes gnarled history of her members, including her popes: “If you are not prepared to blush for Alexander the Sixth, it is childishly inconsistent to take pride in the memory of Saint Francis.”

I confess to thinking the first couple chapters looking over the contemporary scene are less persuasive, however, than they would have been in 1927. The demographic, doctrinal, and moral freefall of so many Protestant groups was and is still true, but to pit against this the Catholic Church’s strength of dogmatic teaching and the assurance that the papacy is a kind of sufficient bulwark against doctrinal corruption seems ever more precarious nearly a century later. The Catholic Church in Germany especially but also in many other places today seems little different from the Anglican Church in terms of its on-the-ground rejection of revealed truth. Comments about how the ordinary man “thinks no better of Christianity for its efforts to be undogmatic,” or that the “average citizen” has the “uneasy impression” that “the parsons do not know their own business,” apply just as easily to the Catholic communion in 2022. Any effective Catholic apologetic has to take much more fully into account the stark historical realities of times when the Church’s papal and episcopal trumpets are uncertain at best. Indeed, in the chapters on specifically Catholic beliefs there is a bit too much of the modern Catholic overemphasis on the “monarchical” nature of the papacy and its ability to secure unity.

Nevertheless, Knox excels at making clear what Catholics believe. Indeed, the book was originally written for a series in which writers were to make an exposition of their faith. Knox’s chapters on the Catholic approach to how we can know God exists and what he is like are good reading for all Christians who would like to see an approach to faith that fits with reason. Chapters 6-9, giving the biblical and historical ground for the Catholic beliefs in Christ as the fulfillment of the informal revelation spread throughout the world as well as the specific revelation given to the people of Israel, are the kind of thing any Christian apologist will find useful.

Even when he gets to specifically Catholic teachings, practices, and desires, Catholics as well as non-Catholic Christians will get a great deal from Knox’s explanations, which always clarify what exactly the Catholic position is and how, even if unbelievable to many, it is not irrational or silly.

Knox, according to his biographer and friend Evelyn Waugh, thought that there was much more to do in apologetics that was not accomplished in this volume.  Later essays in this field attempted to do more specific tasks, but this volume has stood the test of time as a tool for basic understanding.

The Mass in Slow Motion was written nearly twenty years later for convent schoolgirls. Those looking for historical or technical expertise will not find it here, for Knox says upfront that he “know[s] nothing about liturgy.” Instead, this book is a very personal and interior walk through what we would now call the Traditional Latin Mass—specifically, the simple form known as the Low Mass—from the standpoint of a priest who sees the Eucharistic liturgy in Robert Hugh Benson’s terms as “a kind of religious dance, a symbolic dance.”

Some reviewers have observed that Knox is a proponent of what has come to be called “active participation” in the Mass, but it must be observed that Knox neither thinks this means lay people must be doing lots of physical jobs in the Mass nor that they are even obligated to be “following” the liturgy at all times, even if that is a good. “Of course, as I’m always telling you,” he observes, “if you find it difficult or if you find it dull trying to follow the Mass, you are much better employed in simply kneeling there and saying your prayers, with a book or without a book, while Mass is going on” (Knox’s italics). Nevertheless, as he explains, if you are going to follow it, it’s good to have some sense of what you are following, so that “all the Mass belongs to you, and you to it, if you are really going to follow it.”

This doesn’t mean a sense of entitlement, for as Knox says, going to Mass ought to be accompanied with a sense of “shyness,” of “butting in somewhere where you aren’t wanted.” This isn’t to say God doesn’t want us; it is to communicate the fact that we take God’s love and his gifts for granted. That does not aid us in worship. Seeing that we are “ridiculous creatures” who are truly unworthy on our own, it is useful to hear multiple times in the midst of this long prayer, “Let us pray.” Why do worshipers need this when we’re supposed to be praying the whole time? Well, as Knox puts it, “I know. . .but were we?”

The Mass is a dance that many people do stop dancing in the middle. Thus all the ways in which the worshiper is being prodded to restart the dance in a true way. The different parts of it, such as the continual calls of oremus (let us pray), are like an “alarm clock”:

That “a little” at the end is key. The point of the Mass, indeed of all worship, is not about the intellect capturing God but about it being captured by God who is beyond us even when he comes amongst us. Concerning the question of one of those “curious bits and pieces in the Mass,” Knox observes that what may seem to be out of strict chronological or logical order in the liturgy should not bother us since in this great dance “we have pushed ourselves forward into eternity, and questions of time don’t bother us.”

So too with the language, which might be humble to those who have the sort of classical and literary background he has. “Why those Prefaces are so good,” he observes of the prayers beginning the liturgy of the Eucharist proper, “I don’t quite know. They are not frightfully good or frightfully clear Latin, but they manage to get in a lot, somehow, in a small space.” It’s not just their concision either, for the terms they use are also full of wonders: “Strange, primitive phrases, not in the least the well-worn language of our theological copybooks; they take us back to a time when—dare we say it?—theology was somehow richer because it wasn’t all so terribly precise.”

There are many, many other little lines in this book that I would like to quote, but better for the reader intrigued to go straight to the text. Taken together they provide a kind of brief guide to the Christian life. “Trust and obey” was a song I loved in my childhood. Knox’s twin volumes tell us to believe and worship. Proper belief provides the endpoint necessary for the soul to journey toward God and not merely settle for “change,” which Chesterton called “the narrowest and hardest groove a man can get into.” But belief alone won’t cut it, for as St. James put it, even the devils believe. The journey requires us to dance the dance of worship, in the midst of which we find a still point in a spinning world.

Destiny is always jumbling up the pattern of our lives like the patterns in a kaleidoscope. You can’t avoid it, even by entering holy religion; you take a vow of stability, only to find that life is one long round of packing. The charmed circle is always being broken up; we are separated from the people we have grown accustomed to. But do let’s get it clearly in our heads that there can be no real separation, in life or in death, as long as we stick to the Holy Mass. In Christ we are all one; the sacred Host is the focus in which all our rays meet, regardless of time and space.