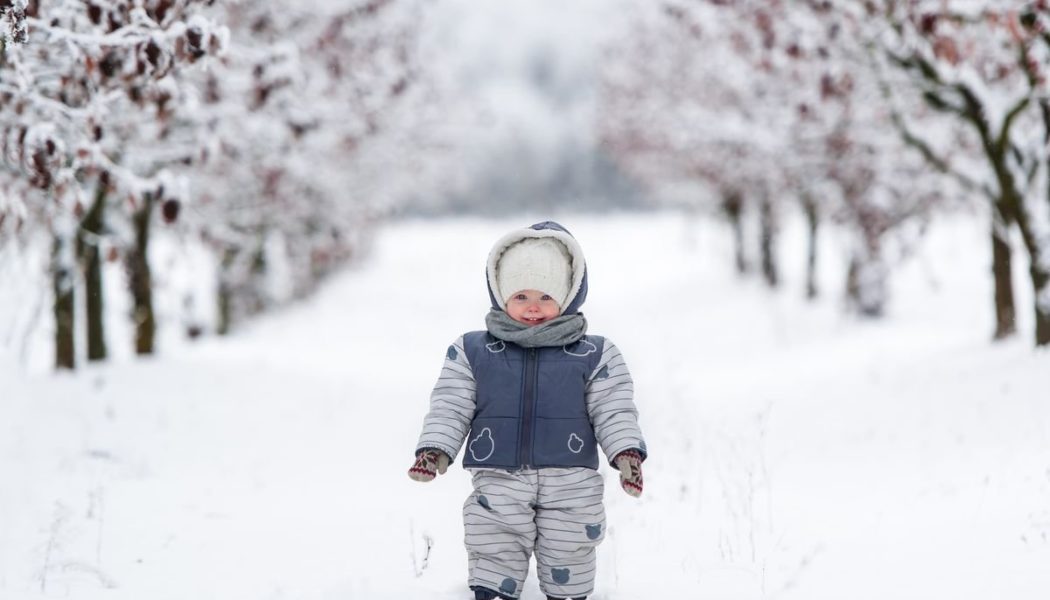 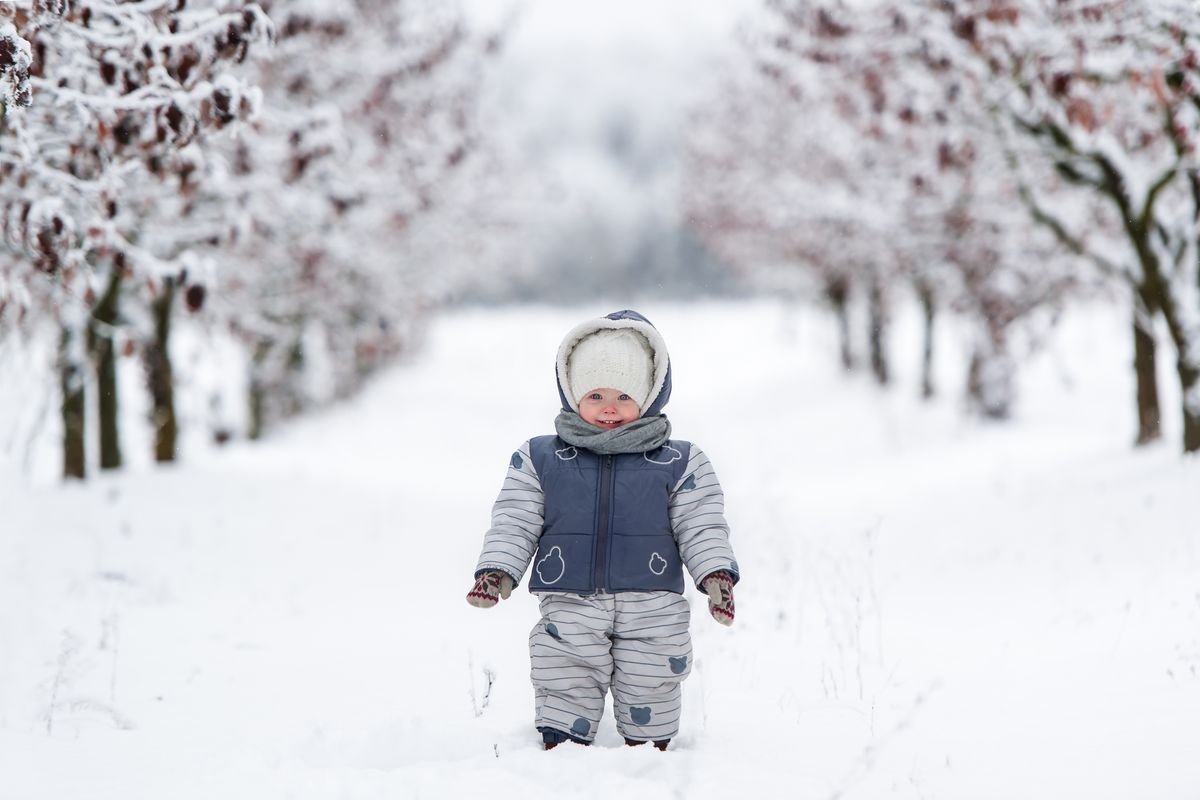 Every bad winter that comes around, American need to relearn how to deal with, and dress for, cold weather. It’s more important now than ever, when staying safe out of reach from coronavirus means spending more time outside in the cold. When it comes to dressing for a hard winter, there are people who are experts in this particular area, for whom brutally cold environments are just part of the job. Cathy Geiger is a professor at the University of Delaware, and has studied the behavior of sea ice at both the arctic and Antarctic poles for more than three decades.

Having worked on 10 polar expeditions, Geiger’s seen a lot (including some gross frostbite stuff that involves eyelashes; we’ll get to that). For the sake of clarity, because layering for sub-zero temperatures is pretty complicated, the following information will be distilled via a handy question-and-answer format.

There are a couple main tenets of layering that Geiger adheres to. The first and most important of them is to wear lots of loose layers — the key word here being “loose.” That’s because the insulated air that circulates between each layer is what’s actually keeping you warm. The more active you plan to be, the fewer layers you should wear.

Another important tip she stresses is that good body circulation is the key to warmth. “If you’re wearing 700 layers and you’re like the Michelin man and you can’t move, all that padding isn’t going to do you any good if you block off your circulation,” she explains. “[If you wear] four pairs of socks stuffed in a boot, your toes are going to get frostbite because everything’s too tight. There’s no blood down there.” 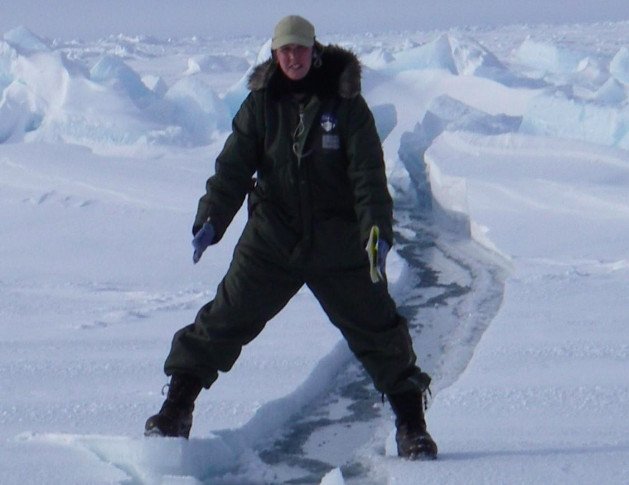 Cathy Geiger, 200 miles north of Barrow, Alaska, on an expedition in 2007. “Notice the use of a baseball-type cap.” Robert Harris

When Geiger goes on an expedition where temperatures can plunge between 30 degrees and 40 degrees below zero, she usually layers about four pairs of oversized long johns in moisture-wicking synthetic fabrics or merino wool, a Dickies bib, a Turtle Fur for her neck and face, and at least three pairs of gloves (the thinnest layer goes on first, the military surplus ones go on last), topped with Carhartt coveralls and knee pads. Over that, she wears an extra-large L.L. Bean extreme-weather coat shell.

“The shell stops the cold from breaking through, so it’s just like weatherizing your roof: Your body is a personal shelter. In really cold weather, you want to wrap your body like you would insulate your house.”

What are the best fabrics to use to shield from wind and cold, and how should I layer them?

Conventional wisdom says to keep away from cotton, because it has virtually zero moisture-wicking properties. Instead, Geiger says, make sure that the fabric closest to your skin is made of synthetic fabrics or merino wool.

Why are moisture-wicking fabrics so important? “Sweat is what will kill you,” she says. “The big thing to do is [move] slower than you think. Once you get into the zero digits, you don’t want to start running around and warm up so much that you break a sweat.”

And regardless of how you feel about Canada Goose, they’ve done hoods right. Geiger recommends hoods with fur (or faux fur) trim because “fur creates friction that holds back the wind.”

What’s the best way to protect my skin from the elements?

You should always be wearing sunblock on your face, but before heading out into a snowy environment, there’s one place that people might miss: the underside of their nose. “Snow reflects!” she warns. Once you’re back inside, go for the usual suspects that promise to moisturize: heavy lotions, balms, and Vaseline.

Yes! And they require their own layering methods, too. While you probably won’t be wearing goggles during your commute to work, you can still rely on the tenets used by arctic researchers to protect your eyes and face.

“If you put on a baseball cap and [then] a snow hat, the ball cap creates a brim, [and] it’s amazing how much sun that blocks,” she says. “It’s a great wind blocker.” Another handy use for baseball caps: When you wear sunglasses, the brim traps the heat that would have been lost through the top of the shades.

And now is the portion of the conversation where Cathy told me something truly wild; in order to properly describe it, I have included the full transcript:

The eyeball is really a serious place where you do not want things to freeze.

Wait, how do your eyeballs freeze?

You’ll notice it because you’ll realize your eyelashes are starting to freeze.

We’ve had situations where people have gone, “Oh my god, what did I just do? Please look at me.” There was a little bit of tearing because when the wind blows really hard in your eye you will start to tear, and then that can cause your eyelashes to freeze. If you try to open [your eyes] too fast, you can actually rip the eyelashes out.

That’s happened to a friend. When you’re talking -20, [you see] freezing of contact lenses and tearing your eyelashes out because they’ve frozen together. If that happens, the first thing you do is leave your eyes closed. If you have sunglasses or anything on, take them off and put your mittens right over your eyes. Warm it up before you try to open your eyes and rip your eyelashes off.

My feet get really sweaty if I wear bulky socks. What’s the best way to layer on your feet?

Remember the thing about loose layers? That’s important here, too. “If you’re really, really, really cold, you actually want your feet to be in something so loose that your boot’s moving around a bit,” says Geiger. She never puts on more than two layers of socks (any more and your feet will slide around too much): a moisture-wicking one closest to the skin, followed by a thicker wool pair. And obviously, wear a waterproof boot because, once again, “wet will really kill you.” A woman walking in Brooklyn on January 31, 2019.
ANGELA WEISS/AFP/Getty Images

What stupid things do people do in the cold that they really shouldn’t?

Strangely enough, one of the worst mistakes people often make is more mental than physical. “If you’re excited and you’re tense, you’re going to block your circulation,” she says.

Instead, the key is to warm up before you go outside. “Saunas exist from northern cultures for a really good reason,” she explains. Try drinking warm soup broth before heading out rather than coffee or tea, because “tea makes you pee.”

How do I know if I’m getting frostbite? And what do I do about it?

Your first warning that you’re getting too cold is how your fingers and toes feel, since they’re the farthest from your heart. “When I was taking students out on the ice, that’s the first thing I’d ask: ‘How’s everybody’s fingers and toes? All 10? All 20?’ I wanted them to feel that they can count all 20 digits because they’re your remote sensors.”

Geiger stresses that cold extremities need to be tended to immediately. If your hands and feet are starting to hurt, stop what you’re doing and warm them up, either by going inside or using the tools available to do so (there are strategies used by fisherman and the Inupiat people of Alaska that involve using one’s own snot and/or pee that hopefully you will never have to use). Any sign of “bleak white skin,” she adds, also means that blistering may have already started.

So, uh … what’s happening with the sea ice?

One of the most shocking things Geiger said was that though she’s been working on sea ice for decades, within the last 10 years it’s gotten so thin that it’s unsafe to camp there. 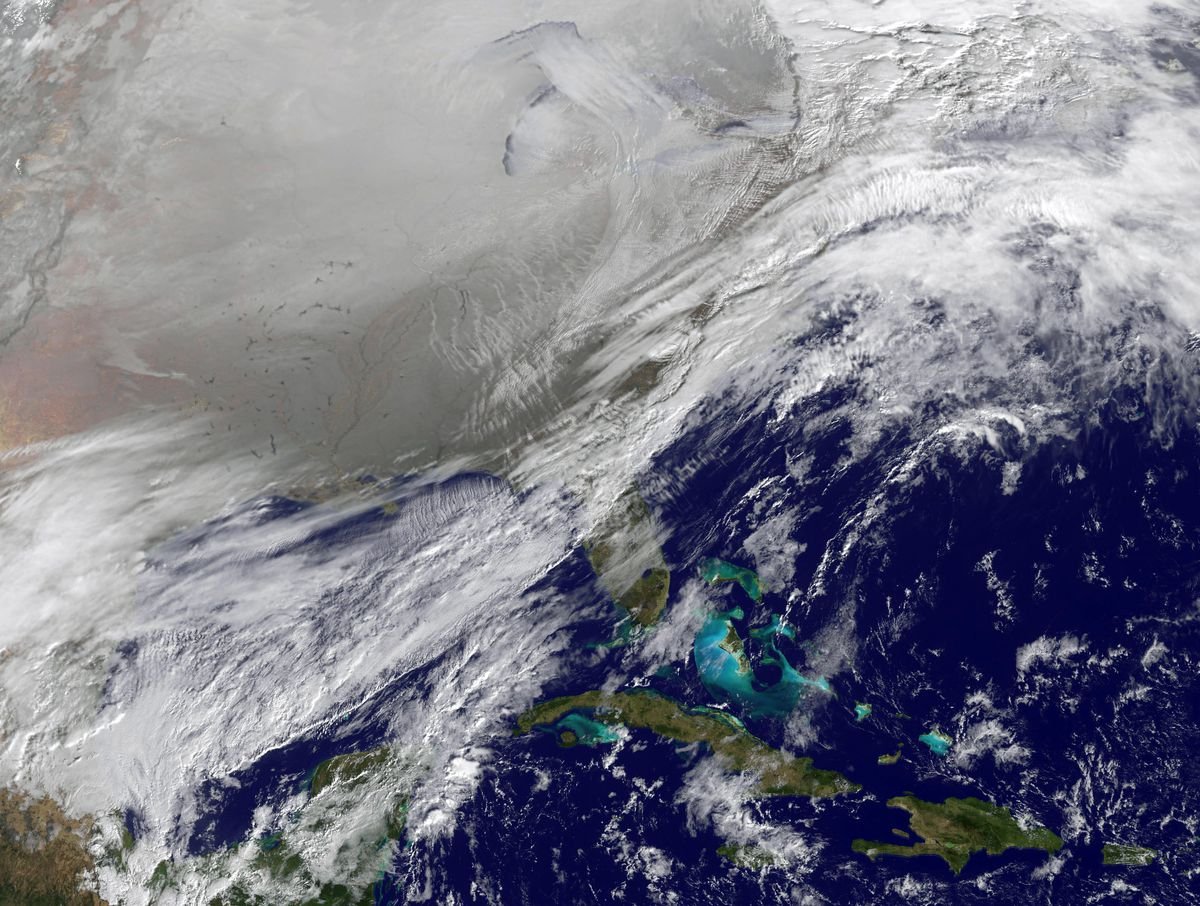 A satellite image of the polar vortex in 2014 that covered the entire northern US.
NOAA via Getty Images

“I’ve been on the sea ice since 1984 and in those days it was great. We just took a boat up there, walked on the ice, and worked on it. 2007 was the last time we could really just camp on the ice. Since 2007, the ice is too dangerously thin to go out and just work on it anymore. You’ve got to work on a boat.”

Because her work has been laden with political baggage due to the Trump administration’s denial of climate change, polar research has been largely on hold since 2016 [this article was written in December 2020].

And yet despite how politicians may feel about the term “climate change,” this, unfortunately, does not mean that it is not happening. Geiger explains that because the planet is warming so quickly, the temperate climates that many people currently inhabit will someday not exist at all.

“And I think, if the news could communicate that, people would say like, ‘Holy expletive. There’s no temperate zone anymore?’ It’s like, ‘Yeah, that’s the consequence of the poles warming faster than the tropics — you lose the temperate zone. And once you do that, that really does make life miserable.” Which is to say, the coronavirus isn’t the only extremely depressing part of this winter.

This 360-degree rotating bumper car is the perfect method to entice kids to put down their devices and play outside. Disclaimer. Accessories.