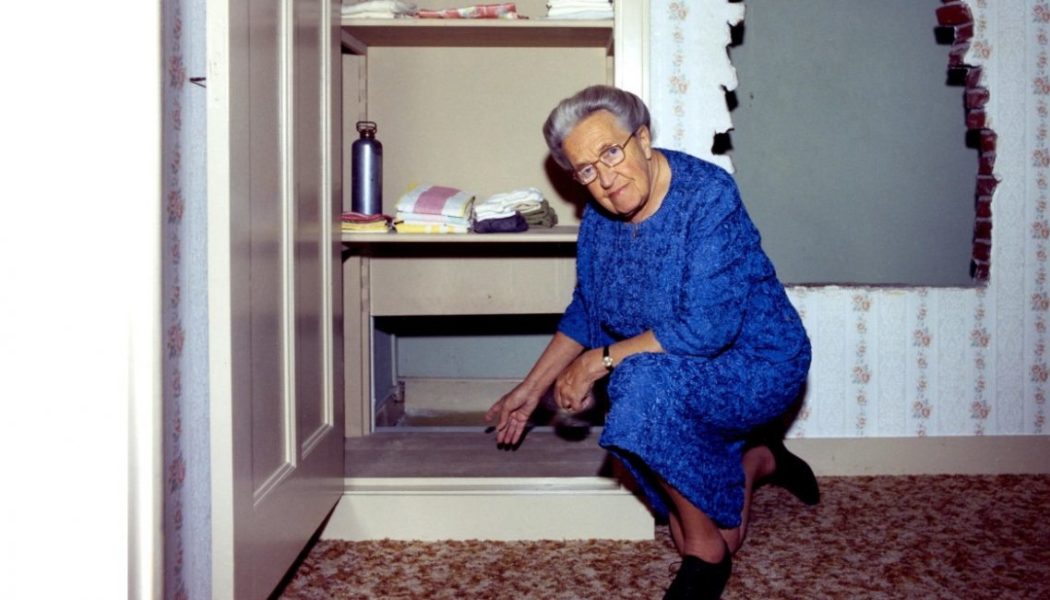 Suddenly they are face to face. Corrie ten Boom and the camp guard. Corrie has just given a speech on the theme of forgiveness. As the people leave, he comes walking forward. Then Corrie sees who this man is. This man is partly responsible for the death of her sister. He extends his hand to her: “What a beautiful message, fräulein.” Corrie freezes. Now what?

How could Corrie ten Boom forgive?

Let’s go back in time for a moment. Corrie ten Boom and her family live in Haarlem. Her father Casper owns a watch store in the heart of Haarlem, and Corrie becomes the first qualified female watchmaker in the Netherlands. When World War II breaks out, their house above the watch store becomes a transit house. A temporary shelter for Jews and members of the resistance. More than 800 people found temporary shelter in their house. An extra wall is placed in Corrie’s bedroom, creating a small hiding place. And this is not without danger. The ten Boom family will pay a high price.

You may have guessed it. The family is betrayed. On February 28, 1944, Jan Vogel is at the door. He asks Corrie for help. His wife is said to have been arrested after hiding Jews. Would Corrie have some money to bribe the police? Although Corrie doesn’t quite trust it, she agrees and asks him to come back half an hour later. Jan Vogel returns. But this time with reinforcements. The whole house is turned upside down. As many as six people are hidden in the small hiding place. Miraculously, after hours of searching, they are not found. They do find a stack of food coupons somewhere – much more than the family is entitled to. The family is arrested. Corrie, her sister Betsie and father Casper.

Father Casper soon dies in captivity. Corrie still receives a letter. Behind the stamp is a secret message. “All watches are safe.” Or in other words – all the people in hiding place are safe. They are freed from hiding after 2.5 days.

Corrie and Betsie eventually end up in Ravensbrück concentration camp. They are treated terribly. It is at this terrible place in Germany where she meets the camp guard. He is engraved in her memory.

As the man stands before her again, the memories come back: the pile of dresses on the floor, walking naked past the camp guards, and the face of the severely emaciated Bestie. Her beloved sister does not survive the camp and dies on December 16, 1944. A few days later, Corrie is accidentally released due to a clerical error.

And then the journey of forgiveness begins. The Christian faith has played a very important role in Corrie’s life. At home, read the Bible everyday, sang a lot and talked about Jesus. Their love for God and the Jewish people was the reason they risked their lives to save others. Jesus’ sayings about forgiveness she knew by heart. After the war, Corrie traveled the world with her message of forgiveness, except to Germany. She doesn’t want to go there. But then she herself is put to the test. Because talking about forgiveness is easier than forgiving yourself. She gets an invitation to speak at a church in Munich.

So we are back in that little church in Germany. The camp guard stands before Corrie. Corrie recognizes him but he doesn’t even remember her. “I became a Christian after the war. Your message about forgiveness touched me very much. You told about camp Ravensbrück. I was a camp guard there. I have always wanted to ask forgiveness of someone personally so I ask you: will you forgive me?

“It feels like my blood is freezing,” Corrie later recounts. “There suddenly stands a man before me, co-responsible for the slow horrible death of my dear Betsie and he dares to ask me for forgiveness. All those beautiful sermons about forgiveness but now I have to forgive myself. And I can’t.” The man holds out his hand to Corrie but she won’t take it.

“Forgiveness is not an emotion. It is an act of the will.”

“I pray softly to Jesus. I don’t want this! You have to help me. Then I realize, ‘Forgiveness is not an emotion. It is an act of the will.’ The feeling is not there but I can move my hand. Almost mechanically I place my hand in his. And then something extraordinary happens.”

“I suddenly feel a warm wave through my body. From my shoulder, through my arm, to our hands. I have to cry, “I forgive you brother, with all my heart.” There we stood. The camp guard and the prisoner. For a long time we held hands. And never before have I experienced the love of God so deeply.”

“Forgiveness is releasing the prisoner just to discover that I was the one imprisoned.”

She shares this lived message of forgiveness all over the world. As a speaker and as the author of many books such as The Hiding Place (later filmed as The Hiding Place) and Wanderer for God. To truly forgive, we need God. She can share a powerful message in short quotes such as: “There is no pit so deep that God’s grace is not even deeper.”

“There is no pit so deep that God’s grace is not even deeper.”

But Corrie is also honest. Forgiving remains difficult. Forgiveness is not one moment but often time after time a choice you make. Not just the war but also when friends hurt you. She also shares the ding-dong example she once heard from a priest.

“Imagine a clock tower. When someone hurts you, you hear the bell ring. Ding/ dong. Ding/ dong. And often we keep pulling on the rope for a long time so we keep hearing the bell. Only when we let go of the rope will the bell stop. But it’s also true that when we let go of the rope, the bell doesn’t stop right away. It will continue to chime for a while. Until we hear the last dong. It is the same with forgiveness. As long as we keep pulling on the rope, the pain will remain palpable. When we forgive, we must let go. That doesn’t mean it’s right that the pain is over, but it will quiet down at some point.”

Did you know that you can still visit the house of the ten Boom family? Enthusiastic guides will give you a tour of the Corrie ten Boom House and you will get to see the little hiding place. Each year more than 30,000 visitors from all over the world come here. Due to the corona crisis, it seemed for a while that the doors had to close for good. No visitors means zero income, but still the fixed costs. After just one appeal, the money poured in and the museum is safe for now. In this way, Corrie ten Boom’s story of forgiveness is still passed on daily.

What do you think of Corrie ten Boom’s message about forgiveness?