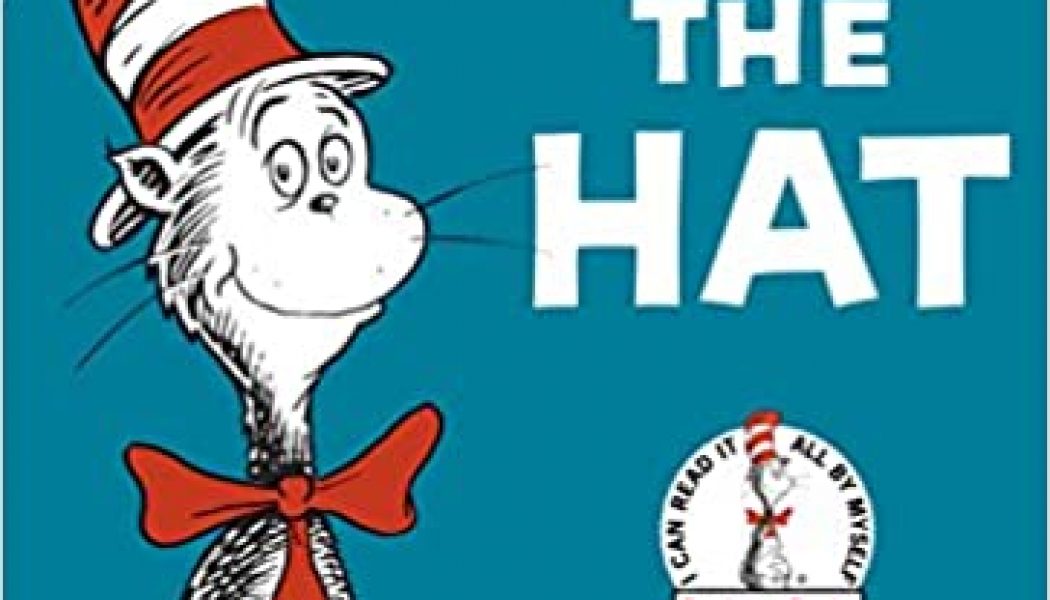 I guess I liked The Cat in the Hat as a child, for the illustrations in my probably 55-year old copy of it are imprinted in my mind, not just from my own reading of it, but reading it to five children over the years. And that copy still lives, somewhere, I think.

That was the only Dr. Seuss that was a part of my childhood, for some reason. I did, of course, read others to my own kids. Over and over and over. Yes, it would get to the point at which I would hide them. Maybe. They may be good for teaching children how to read, but those same elements – the repetition, the simple vocabulary, make them extremely tedious to read aloud, especially since they are so bloody long, and by the time you’ve been doing this for say, twenty years, yeah, you’re ready to move on.

Also, Seussical was one of the most painful experiences of my theater-going life. And it wasn’t just because it was an amateur production. Amateur productions are pretty good these days, after all.

Anyway, the illustrations are far more memorable than the text, and it is an achievement when your style becomes an adjective and can accurately describe a landscape.

But of the banning? It’s all stupid.

And this? Completely predictable. And hilarious.

Just do it on the most local scale possible, so the rest of us can write, publish, teach, stock, withdraw and prohibit what we want, as well.

Different people and different groups will have various interests and concerns and boiling points. Cultural content ebbs and flows and changes.

But at some point, a person did write those words or create those images. Seeing them today, I might find them inaccessible, irrelevant or even offensive, but if I shoot them down the Memory Hole completely, I’ve made it all the more difficult to understand myself and human beings in general.

Let’s stick to writing. There’s absolutely nothing a particular person could write that every other person on earth would find meaningful, inoffensive or interesting. Nothing. This does not end well. It ends up in slogans. That’s all.

There’s not a piece of writing from the past – whether we are talking Jane Austen, Dickens, Fitzgerald, Hemingway or Shakespeare – that someone, somewhere isn’t going to find problematic or legitimately offensive. (I wrote about the casual, narrator-centered racism in Hemingway and how off-putting it was, here.) Just accept it.

The past is a foreign country.

It’s a foreign country, but peopled by human beings, who haven’t changed much. If you refuse to travel to that foreign country, you’re losing out. You’re cutting yourself off from a chance to more deeply understand human beings – what they have in common with you, and how different they are.

This is the vision of one person. Reading her book, you’re in a conversation with her. You’ll recognize some of her world, some of it will be strange, some of it will strike you as immoral, wrong or crazy, Some of what she says will make you wistful and wish you lived in that world – some of what she says will prompt you to wonder how anyone could live in that world.

It’s a conversation, Listen – and respond.

The problem, here, as I said above, seems to me to be one of scale. It’s in the insistence on mass culture and mass education and mass formation.

Where does that impulse come from? What’s it about? Well, it’s not a new one, that’s for sure – as governments, society and Church have, up to recent times, long held control over what is published and available to people.

It didn’t work then. It won’t work now.

And to be clear, when I go on these screeds, I’m talking at the level of the individual. Schools are a different matter – but again, here’s where we get to scale and control. What should be in “the canon” or in the curriculum? How about whatever the local teacher, the parents and the students want. Whatever they discern will help students reach goals of understanding, wisdom and perception. And what I think most of us know from experience is that what helps us the most in reaching those goals are not works that we simply glide through, nodding as we go. It’s works that startle us and even make us angry and force us to think through our assumptions and convictions.

Remember when book banning was bad? Remember when parents who didn’t want, say, in my day, Go Ask Alice or Are You There God? It’s Me Margaret on the shelves were excoriated for narrow-mindedness? Or every classroom and library scuffle since then in which those who wanted to limit children’s access to books were told that it was wrong to shelter kids from ideas and realities? That they just needed to toughen up for the real world? When, yes, concerned parents were told…great art will…startle and make us angry and force us to think through our assumptions and convictions?

No, let’s not forget that.

Banned Book Week should be interesting this year

Scratch that. It won’t be. It never is.