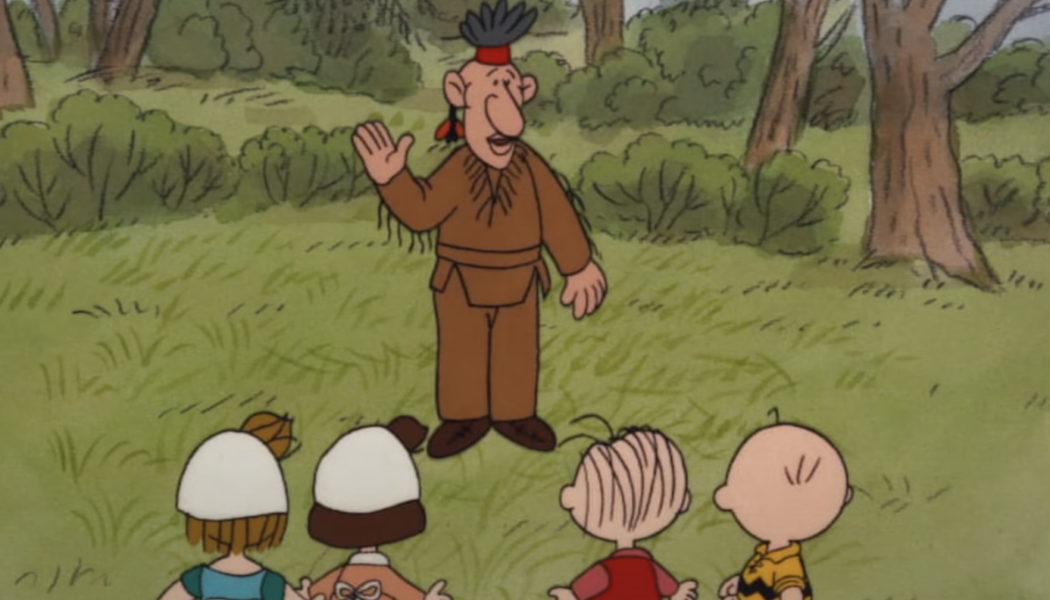 On September 6, 1620, a little band of 130 set sail on a Dutch cargo ship called the Mayflower, for a near two-month journey across the stormy North Atlantic. They would land at Cape Cod in November, write up an agreement of self-governance, stumble onto land, and mostly perish in the harsh New England winter.

Of course, there were already people living in the Americas, as there had been for thousands of years. There were also already European settlements, already Catholics, already missionaries, already Masses.

But the Mayflower and her passengers became the iconic symbols of America, and we remember those pilgrims when we celebrate Thanksgiving each year.

Plus, the voyage of the Mayflower gave rise to one of the best episodes in the Peanuts American history series, which you really don’t want to miss — there is no better teacher of American history than Snoopy.

At any rate, all of that happened 402 years ago and today you’re reading The Tuesday Pillar Post.

Pope Francis on Saturday announced a major – and unexpected – decision regarding the Order of Malta, a religious order and global medical aid organization with a unique place in world affairs, and nearly unique status in global diplomacy — it is, along with the Holy See, one of two non-territorial entities recognized as sovereign in international law, with the ability to issue passports, appoint diplomats, participate in the UN, and otherwise do a host of things usually reserved to countries themselves.

The Order of Malta has that status because of its longstanding place in European history – once it administered the island nation of Malta – and its inclusion in the various international treaties that form the basis for modern international law. But the status is important because it allows the Order of Malta to provide medical aid to suffering people across global borders more easily than near any other aid organization.

Well, the Order of Malta has been embroiled in a reform process for the past five years, all aiming toward a kind of constitutional reform, that might rejigger the order’s governing structures, as it adapts its mission to life in the contemporary world.

If you read The Pillar, you know that reform process has been controversial, and filled with a lot of disagreement among factions of the order.

On Saturday, the pope made a choice — and promulgated himself a new constitution for the order, while firing most of its leadership cadre and governing council, to replace them with other members.

The decision was surprising because it was definitive and comprehensive – no half-measures or efforts at compromise. It was also surprising because technically, the Order of Malta, a sovereign body, was supposed to approve its own constitution, with a set of clear suggestions from the pope. Instead, the pontiff cut through the formalities to restructure the order as he saw fit.

You can read all the details about the new constitution here.

This is all a bit complicated.

So Ed, yesterday, wrote a thorough analysis, explaining the salient details of the order’s history and its current situation, and asking the question lots of people are wondering about:

Is the Order of Malta still “sovereign?”

This is the kind of wonky stuff we live for at The Pillar — and the kind of stuff you love to read.

So if you want only one thing to read about the order of Malta — a thumbnail sketch of a complicated situation, in clear, simple language, read this.

Meanwhile, in Germany, the Archdiocese of Paderborn announced yesterday that it has begun forming a group of lay people who, it hopes, will be tasked with helping to choose the next archbishop.

Yes, that’s right — nine people, chosen by lot, whom the diocese hopes will be incorporated into the selection process for a new bishop. This could actually happen in Paderborn because the cathedral canons – priests attached to the diocesan cathedral – have the historic right in the archdiocese to submit a list of names to the pope as candidates for the episcopacy.

The diocese says it has decided to add laypeople in response to the synodal way’s call for more lay involvement in the life of the Church.

But the plan is facing obstacles in Rome.

You can read all about that, right here.

—
Here’s a report about thousands of British pilgrims lining up – queuing up, I guess they’d say – to venerate the relics of St. Bernadette, who saw visions of the Blessed Virgin Mary at Lourdes, France.

—
And here’s a very cool story you won’t read anywhere but The Pillar.

Earlier this year, Orthodox Archbishop Ihor Isichenko was received into the full communion of the Church, after leading his Orthodox archdiocese into an “integration” of full communion with the Ukrainian Greek Catholic Church.

Yes, that’s right, you read that right — an Orthodox archdiocese in Ukraine was received into the full communion of the Catholic Church.

Of course, not every parish – some joined other Orthodox jurisdictions along the way. But Archbishop Isichenko led his people on a seven-year journey into the communion of the Catholic Church.

The archbishop spoke exclusively with The Pillar about that journey:

“I became convinced that the idea of Orthodoxy as an alternative to Catholicism leads to the formation of ‘Russkiy mirs – Russian worlds’ in miniature, or in the full sense of the word.”

“Whether this is Serbia or Russia… Unfortunately, this trend exists in Ukraine as well. Such particularism suspends the universal nature of the Church, its catholicity.”

“What is being done to Moscow’s Orthodoxy is the great drama of the whole world. The ideology of the ‘Russkiy mir’ shows all Orthodox Churches the danger of a twisting of the system of priorities – the loss of priority of Christian values over national, state, political or party priorities,” he told The Pillar.

This story is fascinating. And you can only read it here. So check it out.

—
Of course, the other big news this weekend was the beatification of Blessed Pope John Paul I, who served as pope for 33 days in 1978.

Since his reign ended abruptly, there have been a lot of conspiracy theories about the circumstances of Pope JPI’s unexpected demise.

Last year, Michelle La Rosa took a deep dive into a question a lot of people have asked over the years:

Was Pope John Paul I murdered?

Michelle broke down the theories, and took a look at the evidence behind them.

And for more on JPI stay tuned, because later this week, we’ll have a report from Brendan Hodge on the trends – historic and modern – of papal canonizations. You won’t want to miss it.

A few other things

Here’s a few other things in the Catholic news, some of which we’ll cover in greater depth as the week unfolds:

— Pope Francis has said that he is under doctor’s orders not to travel to Ukraine and Russia before his Kazakhstan trip on Sept. 13-15 (full Portuguese interview).

— Australia’s bishops have issued a document on gender and identity for Catholic schools.

— Benedict XVI has sent a letter of appreciation to an Italian study center dedicated to the 12th-century theologian Joachim of Fiore (Italian report).

— The Jesuits have reaffirmed their commitment to serving a mountain community in northern Mexico despite the recent killing of two priests.

— The head of the Ukrainian Greek Catholic Church says that the Russia-Ukraine war must not be accepted as “something usual and normal.”

— Kazakhstan’s Archbishop Tomasz Peta explains why “it is not easy to be a Catholic in our country.”

— French president Emmanuel Macron is reportedly preparing to announce a citizens’ convention on end-of-life issues that could lead to the legalization of euthanasia (French report).

Thursday, of course, is the birthday of the Blessed Virgin Mary, and you should celebrate that, in your family, or in your rectory, or with your friends. I suspect it’s possible the Blessed Mother would even be pleased if you picked up an ice cream cake — it’s still summer after all, even if our local pool closes on Labor Day, with a stretch of 90° days still to come.

Today, for example, is supposed to 97° here in my town, but the pool will be closed. Clearly, I’m not happy about this.

However, here’s something I am happy about. Some of you know that I serve as a board member on the Denver Fire Foundation, a non-profit organization that gives grants to Catholic schools to support the inclusion of children with intellectual disabilities and other learning difficulties. It’s a great organization, and I’m proud to be a part of it.

We had our first fundraising gala last weekend, and we were blessed, because our keynote speaker was Msgr. James Shea, president of the University of Mary, in Bismarck, North Dakota.

If I haven’t mentioned this before, I think Msgr. Shea is one of the most dynamic preachers in the United States today, and he’s doing impressive things at the University of Mary.

He gave a great keynote speech at our fundraiser, and I’m very glad to share it with you — even if he trolled me with the promised of creamed corn and sausages:

Finally, thanks everybody for your feedback on our new website. We made the switch because our new site will give us much more functionality for dynamic ways to report the news, and make things like searching our archives much easier. Many of you had asked us to develop a new site, and it took a while, but we’re proud of what we launched.

Still, some of you have written to say that you liked the old site, or to point to us the little hiccups and bugs that can be expected with a new site. We’re working on them. I promise.

And thanks, seriously, for remembering that The Pillar’s journalism is, by design, a subscriber-supported initiative.

We aim to do serious, deep-dive, engaging and meaningful reporting on the life of the Church — stuff you won’t find anywhere else — because smart readers like you are looking for journalism like that.

But don’t forget, we’re defying the tried-and-true model of economic viability here — we’re trusting that you want real reporting, and you’re willing to pay for it. Thanks to those of you who do.

Have a great week everybody. Be assured of our prayers, and please pray for us, we need it.

Sign in or become a The Pillar member to join the conversation.
Just enter your email below to get a log in link.