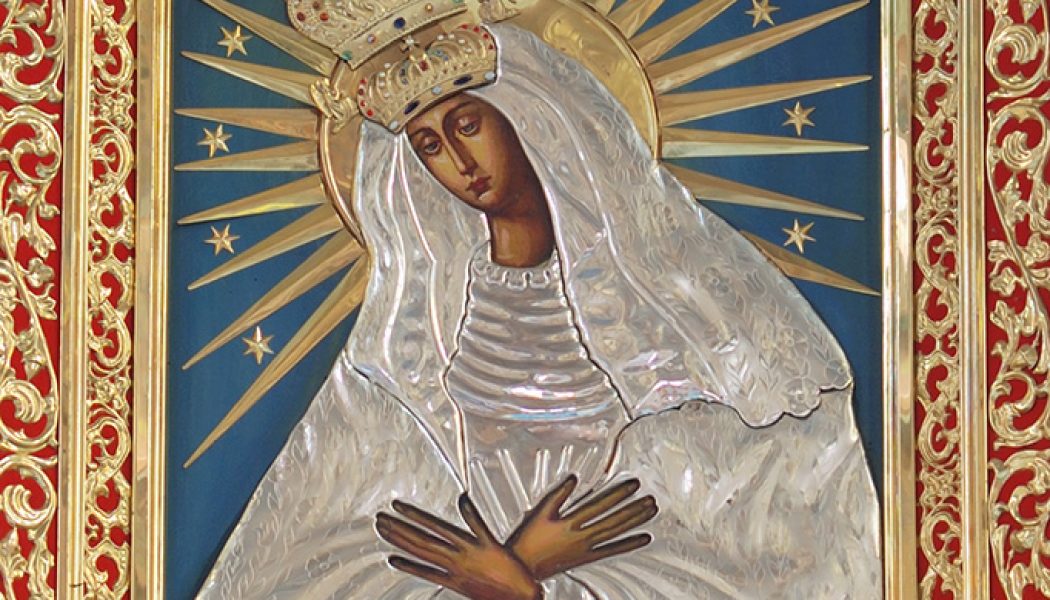 Our Lady of the Dawn (Photo: ‘Thekosiniak’, CC BY-SA 4.0, via Wikimedia Commons)

“I don’t deny that the Immaculate receives the mercy from the Lord God, but she is the personification of this ‘divine mercy’ and that is why a soul is converted and sanctified if it turns to her.” —St. Maximilian Kolbe

George Weigel has pointed out in the book we co-authored, City of Saints, that Poland was the place where the 20th century happened — the place where Nazism and Communism would run their violent course, one after the other. The antidote to these, Weigel added, was also found in Poland, particularly in the work, prayer, and sacrifices of these three related but marvelously different saints.

Although there is little evidence that Wojtyla knew either of the other future-saints personally despite the close proximity in which they all lived, the more direct connections between them came about posthumously. As pope, John Paul II was a promoter of Fr. Maximilian the Mariologist and Martyr – canonizing him in 1982 and calling him an “apostle of a new Marian era.” The Polish Pope was also the promulgator of St. Faustina’s Diaries and the Divine Mercy devotion, adding the Divine Mercy Feast to the Church calendar. Their relationship seemed to come full circle when Pope John Paul II was canonized on Divine Mercy Sunday, 2014.

While working on my book, The Marian Option, it occurred to me that there does seem to be a missing link, however, between Sts. Faustina and Maximilian. What is the connection between Divine Mercy and Mary? I was intrigued by this seemingly missing piece and thought there might be something worth investigating. I had a hunch that there had to be a deeper link between Mercy and Mary somewhere in the mix.

I first stumbled upon a little book by Fr. Donald Calloway called Purest of All Lilies: The Virgin Mary in the Spirituality of St. Faustina. Fr. Calloway makes it abundantly clear that Mary played a significant role in St. Faustina’s life – starting early with the family Rosary, and later blossoming into a true relationship of deep spiritual motherhood. As we see in Faustina’s Diaries, Mary spoke to her, guided her, and consoled her. But there is more. Fr. Calloway writes:

On the Feast of Our Lady of Mercy in 1935, Mary reveled to St. Faustina the link between her spiritual motherhood and The Divine Mercy: “I am Mother to you all, thanks to the unfathomable mercy of God.” St. Faustina, indeed, understood Mary to be the “mother of Mercy” and, thus, greatly associated in both the message and devotions to Jesus, The Divine Mercy. (Lilies, 63-64)

Next, I spoke with film producer Daniel diSilva about his movie The Original Image of Divine Mercy, which features the first painting of Jesus as depicted by then-Sister Faustina when she was living in Vilnius, Lithuania. Centuries before, diSilva explained, Vilnius had acquired the name “City of Mercy” and was surrounded by a protective wall call the Ostra Brama, or “The Gate of Dawn.” Within the gate was a small chapel that housed an image of Our Lady of the Dawn. During a Swedish campaign to overtake the city in 1702, a heavy iron gate fell unexpectedly, instantly killing four enemy soldiers, which turned the tide of the battle and led to a Lithuanian victory. Credit was given to the miraculous image of Mary in the wall. Devotion to the miraculous image of Our Lady of the Dawn swelled. In 1927, the image was renamed Mother of Mercy, roughly eight years before the Divine Mercy apparitions started. Then, after the first Divine Mercy painting was finished, the first place it was displayed was at the same Ostra Brama chapel in Vilnius. DiSilva pointed out that, “like Bethlehem, Our Lady was there (in Vilnius) first, followed by Jesus.”

Eventually, my journey led me back to St. Maximilian Kolbe, who spoke of Mary’s relationship to mercy in his writings. Fr. Kolbe wrote: “St. Bernard says that the Lord God kept for Himself justice, but gave mercy to the Mother of God. I don’t deny that the Immaculate receives the mercy from the Lord God, but she is the personification of this divine mercy and that is why a soul is converted and sanctified if it turns to her.” What is astounding about this is that St. Maximilian wrote this without knowing of St. Faustina’s Diaries and yet he is connecting Mary directly to it.

And finally, I found this little gem by Shane Kapler that brings the spiritual strings together: Marrying the Rosary to the Divine Mercy Chaplet. Kapler braids the two devotions together into one fruitful prayer. Instead of saying a Rosary followed by the Chaplet (or vice versa), Kapler suggests praying one decade of the Rosary followed by the first chaplet decade and so on. From his experience of praying the prayers together, Kapler writes, I “realized that when I brought the Chaplet into the Rosary, I invited Mary to pray the Chaplet with me. We stood together at the foot of the Cross, the Chaplet allowing me to voice her prayer, ‘Eternal Father, I offer you…’ Together we joined ourselves to Jesus’ offering and, through it, interceded that the fruits of his sacrifice to be generously poured out upon the Church and world.”

While the answer to my original question about the relationship between these remarkable saints may not be fully answered on earth, digging deeper has certainly merited the effort. The link is what one might expect – that Mary, as the Mother of God, the Mother of Christ, is also the Mother of Mercy. But as St. Maximilian Kolbe made clear, she is also the personification of divine mercy – transforming and sanctifying all who come to her. We can certainly see that witnessed in the lives of these three remarkable Krakowian saints.

This article originally appeared at the Register on April 21, 2017

We've put up the most comprehensive selection of garden gift ideas to lead you in the correct direction. Template. Unique.