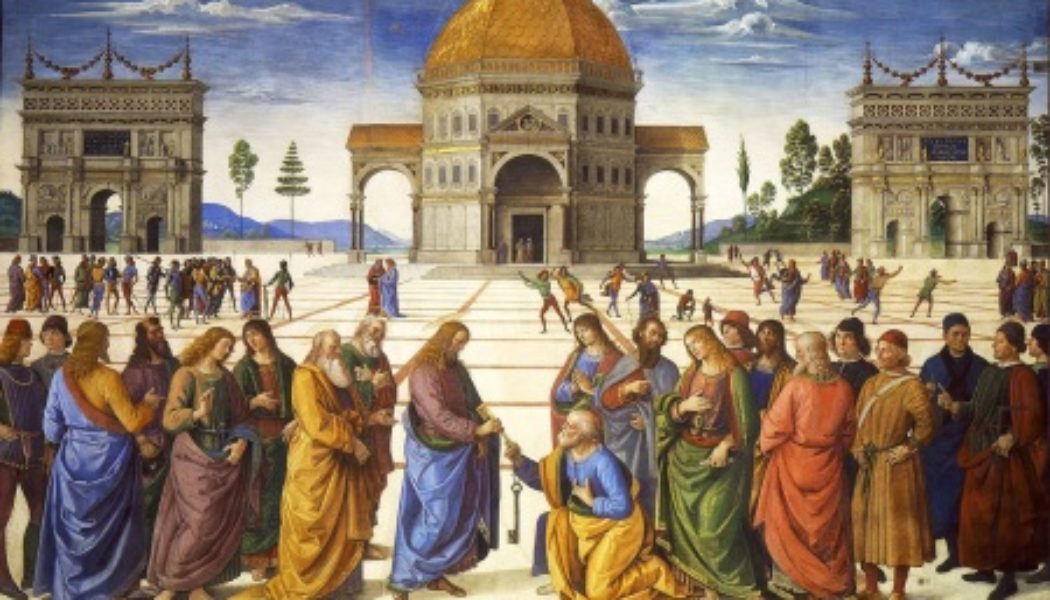 Solemnity of Christ the King
By Fr. Victor Feltes

When the ancient Romans would crucify someone they displayed upon the cross the person’s name and the reason they were punished. For the Holy Cross on Good Friday, Governor Pilate had a sign inscribed in Hebrew, Latin, and Greek with Christ’s identity and the why he was condemned. It read: “Jesus the Nazorean, the King of the Jews.” (The famous first letters of this phrase in Latin were “I.N.R.I.”) The Jewish chief priests told Pilate, “Do not write ‘The King of the Jews,’ but that he said, ‘I am the King of the Jews.’” But Pilate replied, “What I have written, I have written.” Pilate did not have faith in Jesus — he wrote what he did to troll the Jewish leaders — but what he had written was true. Jesus was condemned, suffered, and rose again as the King of the Jews and King of the Universe. This Sunday, we celebrate Christ the King, but where is Christ’s Kingdom today?

During his public ministry, Jesus preached, “Behold, the Kingdom of God is among you!” And at the Last Supper, Jesus prophesied, “Amen, I say to you, I shall not drink again the fruit of the vine until the day when I drink it new in the Kingdom of God.” The next time Jesus drinks “the fruit of the vine,” (that is to say, wine) is on his Cross, when he drinks it from a sponge held up to his lips. From these passages, we can gather that the Kingdom of God has arrived. Yet we can also see that his Kingdom has not yet reached every place and every heart in every way. This is why the world was able to hand Jesus over to death and why Christians still pray to our Father above: “thy Kingdom come, thy will be done, on earth as it is in Heaven.” So where are we to find Christ’s Kingdom on earth? There are clues for us present in Sacred Scripture and history.

In our first reading, all the tribes of Israel become joined to David as their king. The Jews believed that the coming Messiah, their Christ, would be the King of Israel. And Jesus in the Gospels is repeatedly called the Son of David (that is, King David’s descendant, the heir to David’s throne). As St. Augustine taught, the Old Testament is the New Testament concealed, and the New Testament is the Old Testament revealed. The old foreshadows and points to the new. And though imperfect, the Old Testament Kingdom of David and his successors prefigures Jesus’ New Testament Kingdom. Several aspects of the old Davidic Kingdom help us to identify Jesus’ Kingdom in our midst; in particular, the Queen Mother, the Chief Steward, and the royal eunuchs.

One flawed feature of the old Davidic dynasty was that the kings each had multiple wives. From the beginning, God intended marriage to be a union of one man and one woman, but the kings of Israel — believing blood is thicker than water — used multiple marriages to seal their peace treaties and alliances with other lands. However, this creates a problem: when the king has many wives, who is the queen? You can imagine the rivalry and discord this question could cause. The Davidic dynasty’s solution to this problem was for the mother of the king to hold that prominent place as Queen Mother. The Queen Mother had a throne of honor at the king’s right hand and she served as an intercessor for the kingdom. If people had a request, they might bring it to her to present to the king. And if her request were pleasing to her son and served the kingdom’s good, the king would happily grant it to please his beloved mother.

Like in other kingdoms of past and present, the Davidic Kingdom had many royal ministers serving the king. But there was one prime minister among them: the king’s chief steward, the master of the royal household. The Davidic king’s chief steward bore on his shoulders a large wooden key as a sign of his office and authority. Today we honor citizens by giving them a symbolic key to the city; but this chief steward carried a symbolic key to the kingdom. His power was that of the king, on whose authority and with whose authority he acted, to open or to close, to permit or to forbid. However, any chief steward acting contrary to the king’s will would soon find himself replaced by another.

In the courts of ancient kingdoms like Israel’s, one would find royal eunuchs. A eunuch is a male who is either born or made physically incapable of marrying and having children. Kings preferred eunuchs for practical reasons: first, these men were safe to be around the king’s harem; and second, since they had no wife or children of their own, these eunuchs were fully-focused on the work of the kingdom.

The trusted eunuch’s mission, personal success, and legacy were wedded to that of the king and his kingdom. Perhaps you may already realize how the old Davidic kingdom foreshadows the Kingdom of God among us now. Jesus calls disciples who are willing and able to be “eunuchs for the sake of the Kingdom of Heaven.” Today, in his Church, celibate clergy and consecrated religious are dedicated to serving Christ’s Kingdom. Jesus told St. Peter, “I give you the Keys to the Kingdom of Heaven. Whatever you bind on earth shall be bound in Heaven, and whatever you loose on earth shall be loosed in Heaven.” Jesus made Peter his prime minister, the first Pope, his chief steward and master of his household on earth Pope Francis is St. Peter’s successor in that office today.

Jesus has sealed his peace treaty and alliance with peoples of all lands through a single marriage: his marriage to his bride, the Church, bone of his bone and flesh of his flesh. But among the Church’s many members, is anyone the queen? As before, our queen is the mother of our King. Christ the King has raised up his Blessed Mother Mary to a throne at his right hand where she intercedes for his Church. We can ask her to present any request to her Son, and if it is pleasing to him and serves his Kingdom’s good, Christ our King will happily grant it, because he loves his mother and us so much.

The beginning of the Kingdom of God on earth is the one Church of Jesus Christ. Let us remain loyal to Christ our King, and remain loyal to his Kingdom, a Kingdom that is among us now, his Holy Catholic Church.

This entry was posted on November 20, 2022 at 1:06 pm and is filed under Catholic Church, Homily, Jesus Christ, Salvation History, St. Peter, Typology. You can follow any responses to this entry through the RSS 2.0 feed. You can leave a response, or trackback from your own site.