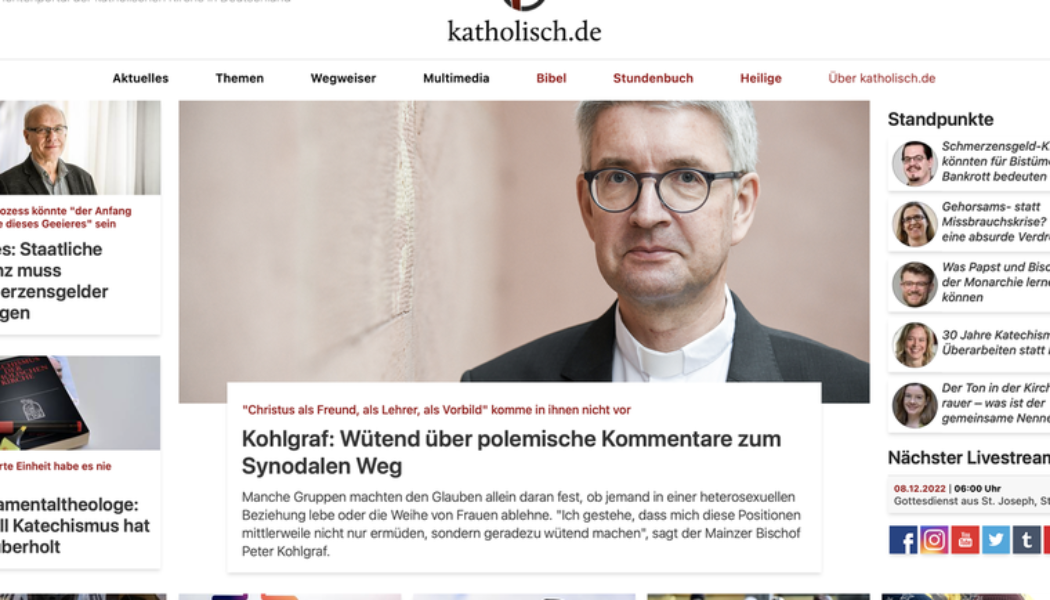 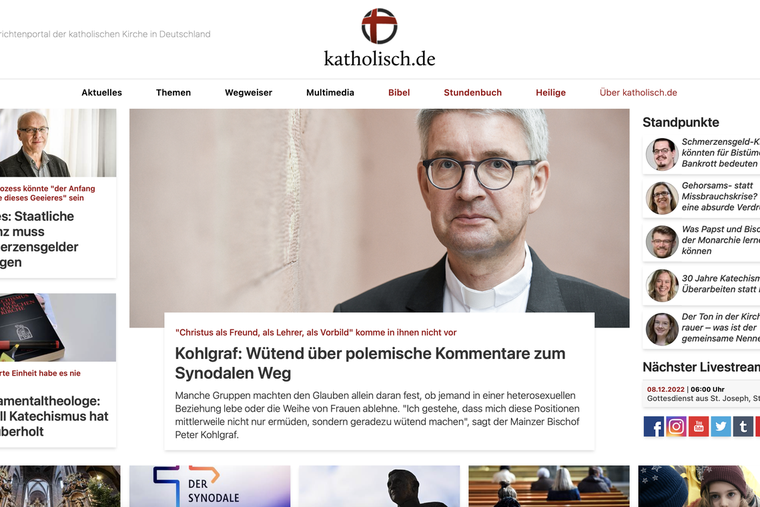 It is a challenge to find an article on Katholisch.de that isn’t seemingly desperate to push the narrative that the Church must change in some heterodox way, especially regarding sexual immorality

A quick glance at this week’s content on Katholisch.de — the German bishops’ conference-backed news website — and you will come across content that effectively parodies today’s dissenting German Church as its members push a radical heterodox agenda through its multi-year Synodal Path that many have warned could lead to schism.

Based in Bonn, where the bishops’ conference is headquartered, Katholisch.de bills itself as “the news and information portal of the Catholic Church in Germany” that “cooperates with the 27 German dioceses and other Church institutions.” Although not overtly part of the bishops’ conference, key conference officials are said to have considerable influence over its content.

First up is an article on a commentary penned by German theologian Hermann Häring, a former pupil and colleague of the late heterodox Swiss theologian Hans Küng, who blames the Christian doctrine of original sin for many ecclesiastical aberrations.

The article unapologetically airs Häring’s views, first published in the German magazine Christ in der Gegenwart, in which he writes that the Catholic Church has been “shaped by this dark, traumatizing view of man” that goes against the Christian image of man as having “undiminished freedom.”

The belief in original sin, he adds, has led “to a general fear of freedom and the world, to a fear of independence and autonomy, and finally to sexual phobia and hatred of women.” This “original sin syndrome,” still deeply rooted in traditions, liturgy, Church hymns and prayers, must be overcome, Häring insists, or the “loss of meaning” in the Church “will become even more dramatic.”

Next up is an article taken from the German Catholic News Agency (KNA) in which Archbishop Heiner Koch of Berlin apologizes for Catholic sexual morality being too strict.

The archbishop, who campaigned for a recent controversial change in Church labor law to allow almost all Church employees to no longer face the threat of dismissal due to being in a same-sex or adulterous relationship or civilly divorced and “remarried,” apologized to “all those who have experienced the Church’s sexual morality not as a guide, but as a threat.”

The new legislation, passed by over two-thirds of Germany’s bishops on return from their ad limina visit to Rome last month, means that, whereas in the past, lay employees had to agree to a moral code to work for the Church, now such issues are viewed as a private matter, and the Church as an employer will pay no attention to them.

Instead of being concerned about the effect of sinful lifestyles on their employees, Archbishop Koch welcomed the fact that bishops now wanted to emphasize what is “typically Catholic” in Church-run institutions “by emphasizing a Christian organizational and leadership culture and by communicating Christian values ​​and attitudes.” With the new labor law, he said the bishops had “committed themselves to unambiguous rules.”

Perhaps to show how far they think the German Church’s Synodal Path must change the Church to bring German citizens back to the pews, Katholisch.de reported on an interview Sarah Connor, a German singer, recently gave to Die Welt.

Connor says she has visited beautiful churches “but all of them have something threatening besides their imposing beauty,” and adds that she “finds it creepy that Jesus is hanging on the cross everywhere.” Connor also says she found the concept of atonement and confession “alienating” but that she likes Christmas, especially decorating and attending Nativity plays in church.

In an in-house commentary, Katholisch.de editor Gabriele Höfling says the Catechism’s 30th anniversary is no reason to celebrate as it can be “rather a nuisance to read,” and she regrets how it interprets remarriage after a divorce as “continued adultery” and adds that “disparaging passages about homosexuals” are “also hard to bear.”

But she says that “pastoral practice has, thank God, long since overtaken these unspeakable tenets, and also in Germany with the Church’s labor law.” Höfling cites Pope Francis’ 2018 change to the Catechism on the death penalty to argue that none of it is “set in stone” and says the Catechism’s anniversary “should be an occasion to either revise it thoroughly or take it out of the Church display immediately.”

In another agenda-pushing article, Katholisch.de reports on a lecture given by German theologian Julia Knop who is calling for women to be allowed to read the Gospel in Church liturgies. “It was only recently, but then painfully, that I became aware that I only knew the words of Jesus — individual sentences, parables, sermons, admonitions — from men’s mouths, in a priestly role, in tenor or bass voices,” says Knop, a member of the Synodal Path. The fact that Jesus’ words are normally read by a priest or a deacon in the Catholic Church leads to a “blatant narrowing of the polyphony of the church,” she asserts.

A professor of dogmatic theology at the University of Erfurt, Knop has often pushed for women’s ordination which recent pontiffs, including Pope Francis, have categorically ruled out. Earlier this year she rhetorically asked whether the will of God for the Catholic Church is any “different in the Old Catholic or the Protestant Church” — ecclesial communities that allow women “priests.”

Lastly, in a commentary, Katholisch.de’s editor Matthias Altmann urges the Church in Germany to ignore the Vatican’s warnings and implement as many of the Synodal Path’s dissenting resolutions that include allowing same-sex blessings “as quickly as possible” and before the process ends next year.

“It takes more courage to implement the resolutions against which there is resistance,” says Altmann, who adds that the “patience of many who are attached to the Church and desire reforms is not infinite.”

All in all, it is a challenge to find an article on Katholisch.de that isn’t seemingly desperate to push the narrative that the Church must change in some heterodox way and move with the world, especially regarding sexual immorality, if she is to survive — a central theme that also underpins the purpose of the German Synodal Path even if its declared aim is to help the Church deal effectively with the sexual abuse crisis.

We've covered both budget-friendly gifts for gamers and some drool-worthy things. Example of inserts changing colour. It perfectly represents my vision, as a fun, welcoming, and friendly brand.