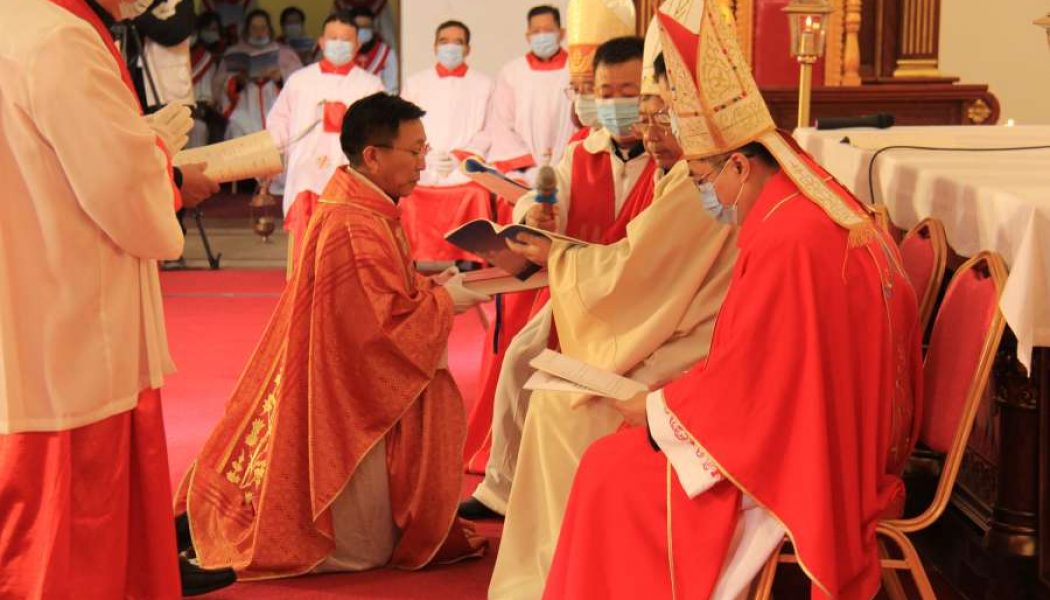 The episcopal ordination of Thomas Chen Tianhao, 陈天浩, took place on Nov. 23 in Qingdao Cathedral with the Chinese Patriotic Catholic Association Chairman Bishop Fang Xingyao presiding, according to a statement and photos on the association’s website.

In 2019, Chen led a Shandong Province standing committee meeting to “study the spirit” of a speech by Chinese President Xi Jinping in which the achievements of the United Front Work Department were celebrated, according to Chinese Patriotic Association.

The Vatican did not announce the appointment of a bishop of Qingdao prior to this ordination. On Nov. 24, Holy See press office director Matteo Bruni confirmed that “Thomas Chen Tianhao is the third bishop appointed and ordained in the regulatory framework of the Provisional Agreement between the Holy See and the People’s Republic of China on the appointment of bishops.”

Bruni added that “other episcopal consecrations are certainly foreseen in the future because various processes for the new episcopal appointments are underway.”

When the Vatican announced the renewal of its two-year agreement with China on Oct. 22, a L’Osservatore Romano article lauded the results of the agreement, saying that Bishop Antonio Yao Shun, of Jining Autonomous Region of Inner Mongolia, and Bishop Stefano Xu Hongwei, of Hanzhong in Shaanxi Province, had been appointed under its framework.

There are Chinese sources that indicate that Chen was first elected and appointed bishop of Qingdao on Nov. 19, 2019, according to Asia News.

The Vatican-China agreement, first signed on Sept. 22, 2018 and renewed last month, concerns the nomination of bishops in China. The Vatican Secretary of State Cardinal Pietro Parolin has said that the goal of the agreement is “unity of the Church” in China. Catholics had been divided for decades between the government-approved Chinese Patriotic Association and illegal underground Catholic communities that remained in communion with Rome.

A 2020 report of the U.S. Congressional-Executive Commission on China found that Chinese Catholics suffered “increasing persecution” after the deal.

All religions in China have been subjected to the Chinese Communist Party’s policies of “sinicization” and technological control, and China’s Uyghur Muslims in Xinjiang province, in particular, have suffered forced labor, indoctrination, sterilization, forced abortion, and torture in dentention camps, according to reports.

Despite mounting international condemnation of China’s internment of more than a million Uyghurs in detention camps, neither Pope Francis nor the Holy See has commented in an official capacity on the situation. But a new book quotes Pope Francis as saying that he oftens thinks about the Uyghurs.

“I think often of persecuted peoples: the Rohingya, the poor Uighurs, the Yazidi — what ISIS did to them was truly cruel — or Christians in Egypt and Pakistan killed by bombs that went off while they prayed in church,” Pope Francis is quoted as saying in the book, “Let Us Dream,” according to AP.

The Chinese foreign ministry spokesman Zhao Lijian responded to this mention of the Uighurs by saying that there was “no factual basis at all” to the pope’s comment.

“People of all ethnic groups enjoy the full rights of survival, development, and freedom of religious belief,” Zhao said at a daily briefing, according to AP.

The United States and 38 other countries have called for the United Nations to investigate the situation and to condemn Chinese human rights abuses in Xinjiang.

This story has been updated after its initial publication to include a statement from Holy See press office director Matteo Bruni.