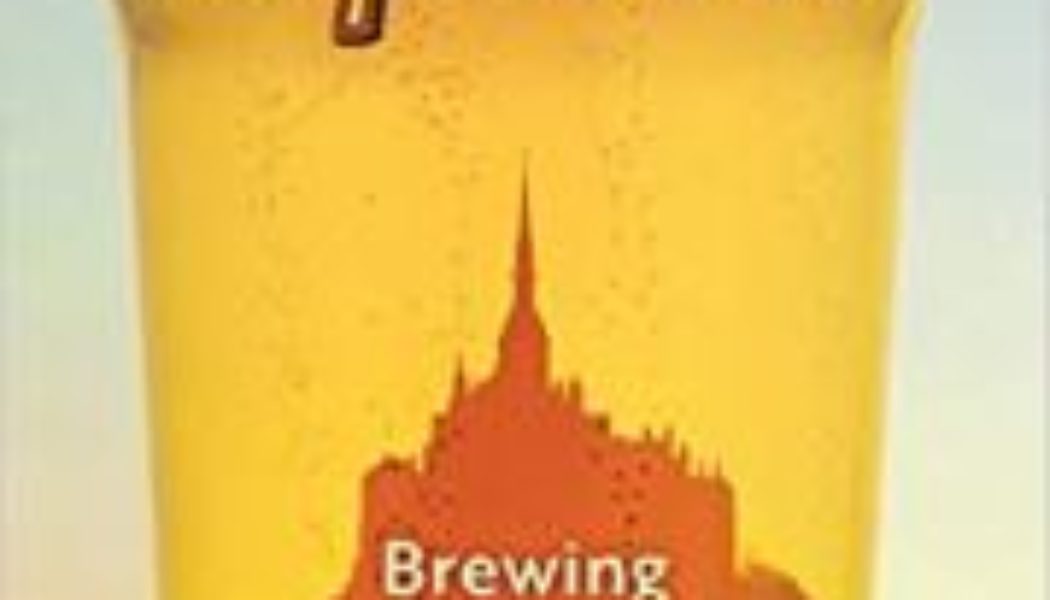 Many of us were excited for the first American Trappist brewery back in 2014 at St. Joseph’s Abbey in Spencer, Massachusetts. I was inspired to write The Beer Option: Brewing a Catholic Culture Yesterday & Today by the long tradition of monastic brewing, which pointed to a whole Catholic history of beer. I wrote a couple of articles following the emergence of new monastery beers, Cause for Mirth and Brew Evangelization, which laid the foundation for the Beer Option book. It seemed that a renaissance of monastic brewing was underway.

Now the Spencer Brewery is shutting down, no longer seeing its brewing operations as financially feasible. In light of the vision of The Beer Option, seeing brewing monks as a model for building Catholic culture, it is important to reflect on the closure of a major monastery brewery in the United States. The Beer Option pointed to the whole tradition of monastic brewing as a model of Catholic culture. Does the Spencer closure mean that the Beer Option is failing?

1 Monastic beer is an expression of a broader Catholic culture.

Brewing is a part of a culture. In the Catholic areas of Europe, beer is a normal part of family life (such as Sunday visits to beer gardens) and is intertwined with faith in the great days of festivity. Monks have long been the premier brewers there–dating back well over a thousand years–and so monastery beers have an established place in the brewing culture of the continent. In America, well, things are different. There were some monks and friars who brewed, such as at St. Vincent’s Archabbey in Latrobe and Bavarian Capuchins in Kansas, but both were casualties of prohibition and faced stiffed opposition a more fundamentalist Protestant culture. In the US, beer found a place neither in family life nor faith communities and faced a stigma as something unwholesome.

Now America has a robust brewing culture, leaving the prohibition era behind. But, where do monks fit here without the long pedigree of monastic brewing that is present in Europe? If you look at the great monastery breweries, there are also places of hospitality and the distinguished ones are places of pilgrimage for beer aficionados. For monastic brewers to succeed in the US, a similar culture needs to be built up. St. Joseph’s Abbey in Spencer, however, was not interested in opening up to this kind of engagement. John Miller, writing at America, comments:

The monks at St. Joseph’s never agreed to a tasting bar or restaurant on site, even if it might have popularized the brand. “The brewery is too close to the church to invite in outsiders,” said Father Dingwall, who also said they resisted turning the whole operation over to laypeople. “We wanted it to be a monastic business with monastic labor.”

The monks deliberated for ten years before opening the brewery and did not seem really to embrace it as a part of their community. Yes, they saw it as a part of their monastic work, but running a brewery is different than making jam. Did they really want the brewery? Did they see it as an extension of their own community and culture? Or did they just want to profit from it and not be too bothered? A brewery attracts people and becomes a means of engaging the community. If you look at Mt. Angel Abbey, they opened the St. Michael’s taproom and the brewery fit into their culture of holding cultural festivals in the summer. The monks of St. Benedict’s Monastery in Norcia, Italy (St. Benedict’s hometown) see their brewery as a means of evangelization. To run a monastic brewery is to embrace a whole tradition of Catholic culture.

2 Monastic beer is about tradition not imitation.

The American beer market is saturated. How can monks compete? I think certainly not by beating the competition at its own game, following the latest trends and mimicking them. If someone buys a monastic beer, they want a monastic product. They want it to be good, of course, but they are choosing a beer with a pedigree, something that has a deeper connection to a community and that has a purpose. The Belgian Trappist beers are world renown and set a high bar for any monastic beer. It would be hard to beat Chimay, just as it would be hard to beat the American craft brew market at making IPAs. What is a monastery to do?

The initial strategy of Spencer was to take a less well known Belgian monastic style, the Pater beer, the monks’ own table beer, and focus on that style. St. Joseph’s Trappist brothers in Belgium gave the monastery a piece of invaluable advice: craft their identity through a single beer. Unfortunately, they did not listen to that advice, as detailed in the Boston Magazine:

So the Spencer group made several research trips to Belgium, where six of the world’s 10 Trappist breweries are based, to convince yet another set of skeptics that they were up for the task: the International Trappist Association. It took some convincing, but eventually their Belgian counterparts offered three conditions for the launch: Build a state-of-the-art brewery with the finest and latest technology, hire a skilled brew engineer, and, for the first five years, make only one type of beer.

Despite the five year stipulation, Spencer quickly came out with a number of different styles. In addition to their initial Spencer Trappist Ale, their pater beer, I watched with dismay as they rolled out an imperial stout, peach saison, monks’ IPA, premium pilsner, Vienna lager, and holiday ale. That is trying to be all things to all people. I will forgive them, however, the addition of a quadruple, a staple of the Belgian tradition and a logical extension of their initial brew.

In my own opinion, Spencer needed a flagship beer that embodied its community. When people thought of Spencer, they would think of that beer, which then could provide a foundation for some variation in the future. Diverging spread out its identity so that it did not seem to stand for anything in particular.

3 The Trappist brand does not succeed automatically.

Given the international admiration for the Belgian Trappists, I suppose high expectations for America’s first Trappist beer made sense. Would it be enough, however, to use the Trappist name to sell large volumes of beer? We now know the answer.

The Belgian monks may have led Spencer astray on one point: beginning with a “state-of-the-art,” and therefore expensive, brewery. The monks turned to brewing to save their finances, although they had to make a huge investment to begin. The monks bet big on success, building a 36,000-square-foot brewery, costing many millions of dollars. Gary Dzen wrote after the brewery opened :

Colleague Megan Woolhouse and I toured the facility (below) this week and wrote about it for Friday’s Globe. The brewery is massive, with the capacity to brew 40,000 barrels a year. By contrast, Smuttynose brewed 42,000 barrels of beer last year, Jack’s Abby 6,000 barrels, and Enlightenment Ales 150 barrels. Spencer Brewery will start out brewing twice a week for a total of 4,000 barrels in 2014, equivalent to 56,000 cases or 1.3 million bottles, before increasing production to 10,000 barrels five years from now. [Br. Isaac] Keeley calls the initial production “a drastic under-use of this facility.”

Before establishing a brewing culture and a clear identity, the monks built a large brewery too quickly. They never got close to using its full capacity. This must have been a major force driving all the different styles they put out. If brewing is a part of the community’s culture, then it can gradually grow from there, proving demand and initial success before making such a large investment.

4 Monastic brewing flows from the strength of the religious life

A brewery cannot save a monastery. This last insight is not specific to St. Joseph’s Abbey but more of an insight on the monastic life more broadly. Monastic beer requires a strong community, particularly as you need monks to make it! Recently one of the Belgian Trappist beers, Achel, lost its official Trappist designation because monks had to leave the monastery for lack of vocations. There were not enough left to sustain Achel’s monastery, and the average age of a Trappist monk worldwide is close to 70. Given that fact alone, there will be more closures. We can’t forget that a strong monastic brewery should serve as an expression of a strong monastic community. It should embody and project the community’s spirituality, its lived expression of ora et labora-its prayer and work.

Unfortunately the monastic life is currently experiencing of a crisis. The Rule of St. Benedict is not being lived faithfully and the number of hours of prayer in the monastic schedule has been curtailed. Monks are also doing less manual labor. Visiting some monasteries, including in Belgium, one gets the sense that they can be downright secular. The whole purpose of a monk is to seek God and to put him first. The monks therefore provide a key model for integrating culture and beer within a true Christian orientation.

Without a genuine lived expression of the monastic life, a monastic brewery would be a facade. Brewing will not save Trappist communities in decline. Beer will not produce vocations but will ferment from a strong community life. Trappists, and other monastic orders, need to rediscover their identity first and foremost to survive.

The future of the Beer Option

The greatest threat to monastic brewing will come from within: the strength of the religious life of monasteries. Beer can help monasteries to rediscover a part of their own tradition, becoming an important expression of their spirituality of work. It can also build Catholic culture more broadly if the monastery embraces the brewery as a means of engaging the broader community. You would think that it could become a way of drawing more supporters, pilgrims, and even vocations to the monastery. Beer should serve as an expression of monastic hospitality and, therefore, of evangelization. In a secular culture, we need more Catholic groups to find way of engaging those who are estranged from the Church. The Brew Evangelization–or what I call the Beer Option–should remain an important way of drawing people to the Catholic tradition.