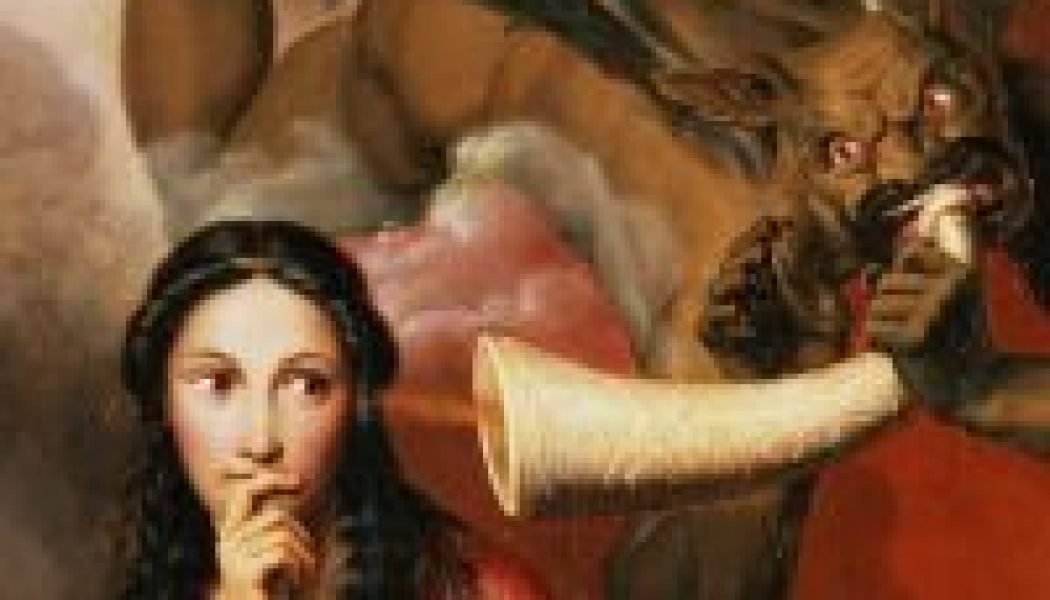 Eve in the Garden of Eden, Jesus in the synagogue at Capernaum, and St. Paul on the roads of Greece each encountered demons speaking. The words of these rebellious, fallen angels are dangerous because they cleverly combine facts and falsehoods to mislead us toward sin and division. Jesus called the demonic warlord, Satan, the Devil, “a murderer from the beginning… a liar and the father of lies,” and the Book of Revelation identifies him as “the ancient serpent… who deceived the whole world.”

Satan was the serpent who approached Eve and asked, “Did God really say, ‘You shall not eat from any of the trees in the garden’?” The woman answered the serpent: “We may eat of the fruit of the trees in the garden; it is only about the fruit of the tree in the middle of the garden that God said, ‘You shall not eat it or even touch it, or else you will die.’” But the serpent said to the woman: “You certainly will not die! God knows well that when you eat of it your eyes will be opened and you will be like gods who know good and evil.”

The tree’s attractive fruit looked useful for nourishment and wisdom, so Eve took and ate it; and she gave some to her husband who was with her, and Adam ate it too. It’s true that they did not die in that instant and they did gain new insights into evil and its absence, but by this act of mistrust and disobedience toward God the grace and harmony of original holiness died within them. Adam and Eve were now separated from God, divided from each other, and doomed to suffer and someday die. The devil’s half-truths led them to this.

Another demon was inside of a man at the synagogue in Capernaum as Jesus taught there in today’s gospel. The unclean spirit cried out through the man in front of everyone, “What have you to do with us, Jesus of Nazareth? Have you come to destroy us? I know who you are – the Holy One of God!” It’s true that Jesus is indeed the “Holy One of God,” but what effect could hearing the demon’s other words have on the townspeople? “What have you to do with us… Have you come to destroy us?” The demon insinuates that Jesus is there to condemn and destroy, that all sinners should fear God’s Holy One and flee or fight the Christ who has come to save them. Jesus rebuked the demon, saying, “Quiet! Come out of him!” The unclean spirit could not resist Jesus’ command, and after a convulsion and a loud cry the man was freed. Demons are untrustworthy spokesmen to proclaim Christ and his gospel.

About twenty years later, while St. Paul was doing missionary work in Greece, he and his companions met a slave girl who had a demon. The demon would pronounce oracles through her, generating large profits for her owners. (Demons reportedly do not know the future, but using their very high intelligence and powers of observation they can make keen guesses.) The girl began to follow Paul and his companions, shouting: “These people are slaves of the Most High God, who proclaim to you a way of salvation!” She did this for many days and Paul became annoyed. He turned and said to the demon, “I command you in the name of Jesus Christ to come out of her.” And the demon left her at that moment.

So what was wrong with what the demon was saying through the girl? In addition to yelling the message at inappropriate times, it contained a subtle, fatal flaw which – if uncorrected – could undermine the saving work that Paul was doing: “These people are slaves of the Most High God, who proclaim to you a way of salvation.” If the Good News of Jesus Christ were merely a way of salvation, then you could take him or leave him, and opt instead to choose some other saving path. But as St. Peter preached, “There is no salvation through anyone else, nor is there any other name under heaven given to the human race by which we are to be saved.”

As it was in the beginning and in the days of Jesus and his apostles, demons are still in our world today. Your baptism into Christ gives you great personal protection against them. You belong to Christ, so you should not be afraid, but I want you to be aware that the demons continue sowing seeds of sin and division in our time. Where are the demons active today? Where do we see the most harmful confusions and divisions? In so many teachings of our Catholic Faith the truth is a “both/and,” while the demonic errors and divisions of our time stem from false “either/or’s” and half-truths.

The demons either say that you need not change at all because you are loved by God, or that God will not love you until you become perfect. The truth is that you are loved by God as you are and called to repent and grow. The demons either tell you that God does not desire your happiness, or that you are entitled to avoid all suffering. The truth is God wills your greatest happiness and because of this he will lead you through trials. In this world, the demons encourage us to condemn one political party or politician and ignore the faults of the other, when the truth is both are flawed.

The demons don’t want you to see and promote full truths: that pregnant women need to be helped and unborn children must be protected; that immigrants should be welcomed and the rule of law should be respected; that all people are made for love, for intimacy with others, and sexual relations are meant only for holy matrimony; that there exists a God-given right to private property and a moral obligation to share with the needy; that we should live freely and use our freedom to honor God while safeguarding the good of others. Other examples are abundant around us.

Where there’s smoke there’s fire, and where truths are widely twisted and truncated demons have been at work with their old half-truth tricks. So do not conform to the demon-fueled factionalism of this world, but be transformed by the renewal of your mind in the teachings of Jesus Christ and his Holy Catholic Church, that you may know and do the complete will of God, what is good and pleasing and perfect.

This entry was posted on January 31, 2021 at 12:23 am and is filed under Adam and Eve, Culture, Homily, Politics, Satan, Spiritual Warfare, St. Paul, Sunday Homilies. You can follow any responses to this entry through the RSS 2.0 feed. You can leave a response, or trackback from your own site.