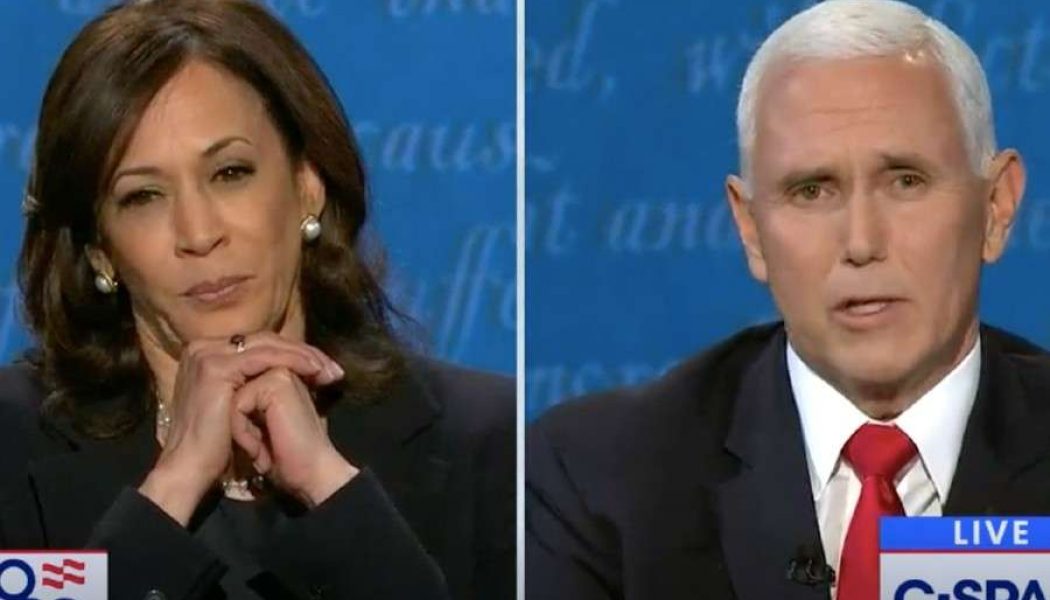 CNA Staff, Oct 8, 2020 / 08:30 am MT (CNA).- Vice President Mike Pence and Democratic vice-presidential nominee Sen. Kamala Harris (D-Calif.) sparred over accusations of anti-Catholic bias, the Knights of Columbus, and filling a Supreme Court vacancy before election day. The candidates spoke during the in-person debate held on Wednesday evening at the University of Utah.

Amy Coney Barrett, a Catholic judge on the Seventh Circuit Court of Appeals, was nominated by President Trump to fill the Supreme Court vacancy created by the death of Justice Ruth Bader Ginsburg. Barrett is a mother of seven and a former law professor at the University of Notre Dame.

Debate moderator Susan Page, Washington bureau chief of USA Today, brought up Barrett’s pending confirmation to the Supreme Court as a possible prelude to more abortion restrictions at the Court, including the repeal of Roe v. Wade.

Pence praised Barrett’s “lifetime of experience and a sizable American family.” Although baptized Catholic, Pence began attending an evangelical church with his family.

“We particularly hope that we don’t see the kind of attacks on her Christian faith that we saw before,” Pence said of Barrett, noting that the Democratic chair of the Senate Judiciary Committee, Dianne Feinstein (D-Calif.), told Barrett to her face at her 2017 confirmation hearing for the Seventh Circuit that “the dogma lives loudly within you, and that’s a concern.”

In December 2018, CNA first reported that Harris asked Brian C. Buescher, a nominee for the U.S. District Court for the District of Nebraska, if he was aware of the group’s opposition to abortion when he joined it, and if he agreed with it.

Harris, together with Sen. Mazie Hirono (D-Hawaii), asked a number of questions of Buescher regarding his membership of the Catholic charitable group, with the senators referring to it as “an all-male society” that “has taken a number of extreme positions.” They asked Buescher if he was aware of the group’s opposition to abortion and “marriage equality” when he joined, and if he would quit the group if confirmed to the court “to avoid any appearance of bias.”

Harris actually questioned three different judicial nominees in 2018 over their membership in the Knights; in May of 2018, she asked district court nominee Peter Phipps if he had to “swear an oath” to join the Knights, and if he would “carry out” the Knights’ mission of the defense of the right to life as a judge.

“When your group’s organizational values conflict with litigants’ constitutional rights, how can litigants in your court expect a fair hearing?” she asked.

Harris, on Wednesday, responded that “Joe Biden and I are both people of faith, and it’s insulting to suggest that we would knock anyone for their faith.” As she noted, if elected Joe Biden would become only the second Catholic president in U.S. history. Harris herself, in a column in Deseret News this week, mentioned attending a Church of God growing up and said her faith has inspired her to serve others.

Harris refused to answer questions on whether a Biden-Harris administration would support adding additional justices to the Supreme Court following a Barrett confirmation.

Pence, when asked if he would like to see Indiana ban abortions should Roe be repealed, first pivoted to a previous topic and explained why the administration’s decision to kill top Iran general Qasem Soleimani via drone strike in January made Americans safer. Christian advocacy groups had warned that the strike could create more tension in the region and provoke counterattacks on minority Christian communities, especially in Iraq.

He then brought up Barrett’s faith and Harris’ questioning of Knights of Columbus member Brian Buescher.

Harris, discussing the court, said that “there’s the issue of choice, and I will always fight for a woman’s right to make a decision about her own body. It should be her decision, and not that of Donald Trump and the Vice President Mike Pence.”

In an following question about how the Trump administration would protect people with pre-existing health conditions if the Affordable Care Act is repealed, Pence then used some of his time to address abortion.

“I couldn’t be more proud to serve as vice president to a president who stands without apology for the sanctity of human life,” he said. “I am pro-life, I don’t apologize for it.”

He then highlighted the Biden-Harris ticket’s support for taxpayer-funded abortion and increased funding of Planned Parenthood.

Neither Pence nor Harris said specifically what they wanted their home state to do on abortion if Roe is overturned at the Supreme Court.