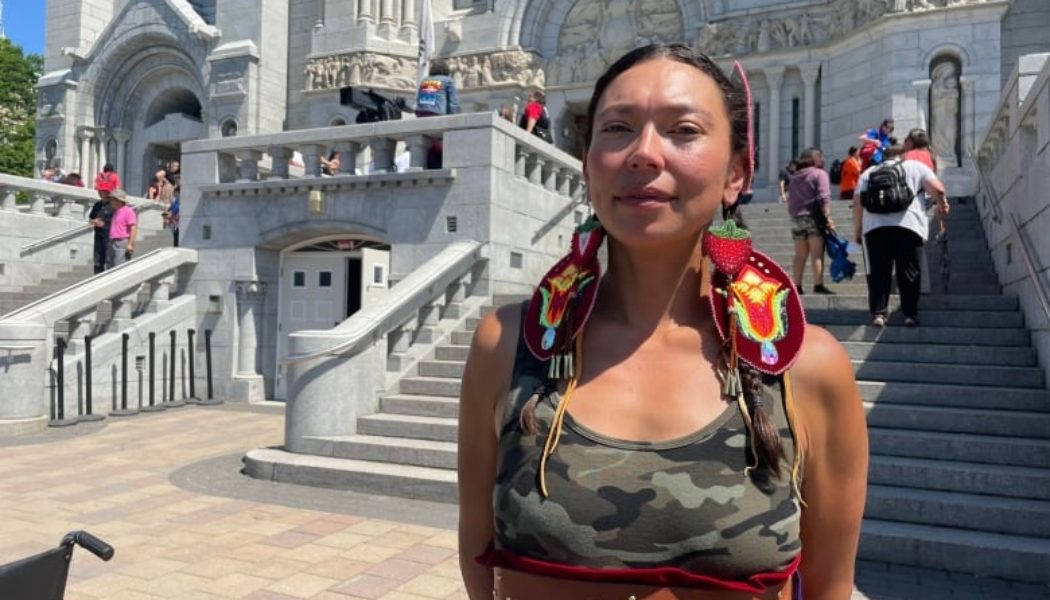 Moments before Pope Francis began leading mass at the Sainte-Anne-de-Beaupré Basilica outside Quebec City Thursday morning, two people made their way to the front of the altar to hold a brief, silent protest urging the pontiff to go further in his efforts for healing and reconciliation with Indigenous people in Canada.

The protesters held up a large banner that read “Rescind the doctrine” with the Pope and other members of the clergy standing steps away.

The banner is a reference to the Doctrine of Discovery, which is inspired by centuries-old papal bulls that justified the colonization, conversion and enslavement of non-Christians and the seizure of their lands — and, scholars say, laid the foundation for Canada’s claim to land and the Indian Act.

Many members of Indigenous communities across the country were hoping the Pope would do more to speak out against this doctrine during his weeklong trip to Canada.

Sarain Fox, an artist and activist who took part in the protest, said the message was necessary following the Pope’s apologies this week which, according to her, were underwhelming.

“It’s important for us to be recognized as human beings so it’s not enough just to apologize. You need to talk about the root of everything,” said Fox, who is from the Batchewana First Nation near Sault Ste. Marie, Ont., and whose aunt is a residential school survivor.

“Indigenous people are looking for action and our elders have very little time left to see that action.”

Once the ceremony got underway, the banner was then put on display outside the basilica.

Olivia Munoz, a Kanien’kehá:ka woman whose grandfather attended residential school in Brantford, Ont., came from Los Angeles because she wanted to represent the families of survivors.

“We’re like the third generation, and we feel the effects of what has happened to them,” she said. “It was a subject that we only heard one time spoken, and that was it. But I feel the pain. I feel their pain.”

Pope speaks of ‘burden of failure’ in Quebec mass

Pope Francis said there are ‘burning questions’ and a sense of failure around the wounding of Indigenous people in Canada, comments he made in his homily during mass at Sainte-Anne-de-Beaupré Basilica in Quebec on Thursday.

During mass, Pope Francis reflected on how the faithful can at times feel a “sense of failure” for actions of the past, specifically related to Indigenous people in Canada.

“Brothers and sisters, these are our own questions, and they are the burning questions that this [Church] in Canada is asking, with heartfelt sorrow, on its difficult and demanding journey of healing and reconciliation,” the pontiff said.

“In confronting the scandal of evil and the body of Christ wounded in the flesh of our Indigenous brothers and sisters, we too have experienced deep dismay; we too feel the burden of failure.”

In addition to the Pope, members of the clergy took turns addressing the audience.

And three sisters from Pessamit on Quebec’s North Shore, Élisabeth, Jeannette and Solange Vollant, performed an offering hymn in Innu as the Eucharist was prepared.

WATCH | Offering hymn recited in Innu during preparation of eucharist:

Sisters Élisabeth, Jeannette and Solange Vollant, from the Innu community of Pessamit, on Quebec’s North Shore, sing the offertory hymn, which is sung before the preparation of the Eucharist, at the mass presided over by Pope Francis at Sainte-Anne-de-Beaupré Basilica in Quebec.

There were about 2,000 people inside the basilica with several thousands more watching on large screens on the shrine’s grounds.

Seats inside the basilica were reserved for Indigenous participants, delegations from Eastern Canadian dioceses and some government officials.

The mass was also broadcast on the Plains of Abraham as well as in a number of movie theatres in the province.

Eucharist was handed out to those outside the basilica, as well as to those on the Plains of Abraham — although there was not enough for everyone on the plains to take part in the sacrament.

The Pope arrived in Quebec City Wednesday afternoon, and gave a speech calling for unity and healing from the historic Citadelle that evening.

In his speech Wednesday in Quebec City, the Pope said he wanted to express “deep shame and sorrow” for the residential school system in Canada, in which “local Catholic institutions had a part.”

While he stopped short of denouncing the Catholic Church as a whole and its role in creating that system, Francis brought up the United Nations Declaration on the Rights of Indigenous Peoples, saying it would inspire a commitment from Catholic communities to promote Indigenous cultures.

In response to the criticism that the Pope didn’t say enough about the Doctrine of Discovery, Laryssa Waler, a spokesperson for the Papal visit, defended the pontiff’s apology.

She said the apology was “informed directly by the stories he heard from residential school survivors, elders, knowledge keepers and youth who travelled to the Vatican to tell their stories.”

She also said Pope Francis acknowledged different forms of abuse as well as “the memories, scars and open wounds that persist to this day.”

“The Holy Father also directly condemned many of the policies and principles that are commonly associated with the Doctrine of Discovery,” Waler said.

The spokesperson added that Canada’s bishops are working with the Vatican with the goal of issuing a new statement from the church about the doctrine.

A lawyer who specializes in Indigenous rights said the Pope explicitly denouncing the doctrine — especially while in Canada — would have major ramifications for the relationship between the federal government and Indigenous people, even if the church has already said it no longer supports the 15th-century papal bulls that inspired it.

“Because then, it puts pressure on the federal government to take direct action itself, legally, following up from the Pope’s statements,” said Bruce McIvor, a lawyer at the First Peoples Law firm, and a member of the Red River Métis.

“One possibility is the federal government could enact legislation specifically renouncing the Doctrine of Discovery and setting out a proposal for how they will engage with Indigenous people to chart a new path forward.”

Support is available for anyone affected by their experience at residential schools or by the latest reports.

A national Indian Residential School Crisis Line has been set up to provide support for former students and those affected. People can access emotional and crisis referral services by calling the 24-hour national crisis line: 1-866-925-4419.

Mental health counselling and crisis support is also available 24 hours a day, seven days a week through the Hope for Wellness hotline at 1-855-242-3310 or by online chat at www.hopeforwellness.ca.

Entertainment. Link building on autopilot, for you who wants to give your link building a boost. Cotton baby bibs with pacifier holder.