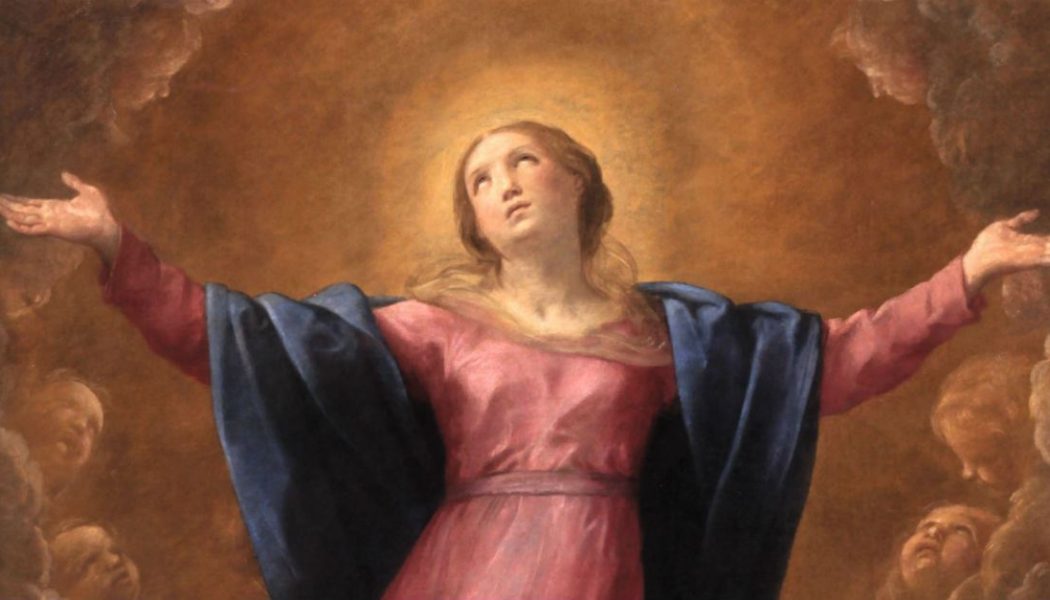 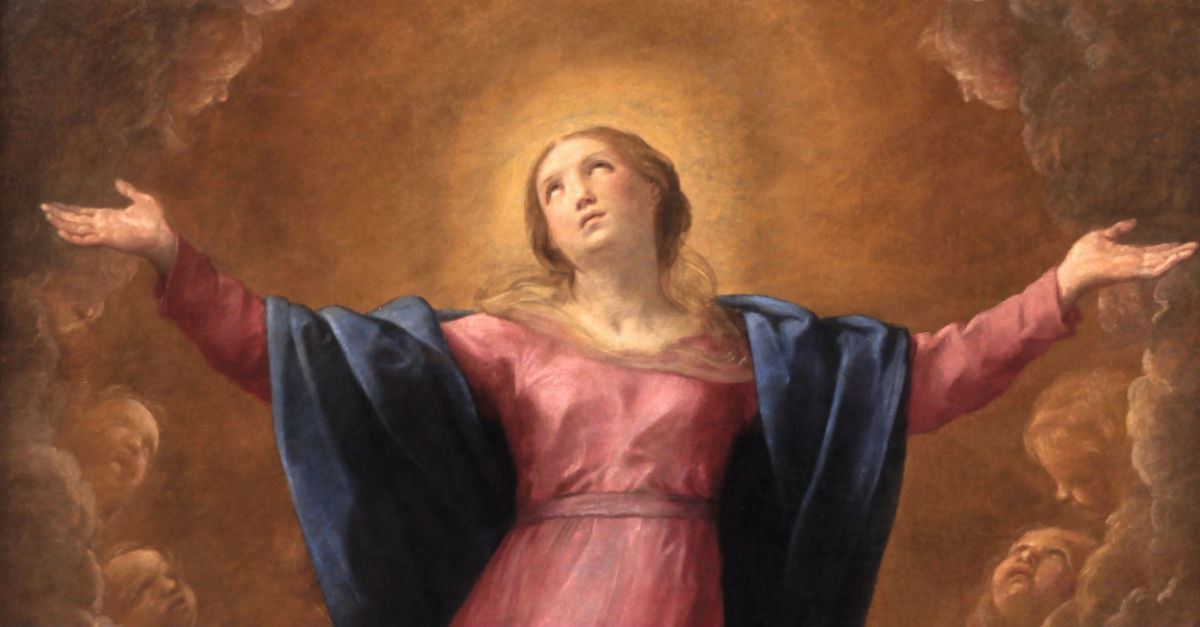 What is the Assumption of Mary?

In 1950, Pope Pius XII declared that it was divinely revealed dogma that: “the Immaculate Mother of God, the ever Virgin Mary, having completed the course of her earthly life, was assumed body and soul into heavenly glory” (Pius XII, Munificentissimus Deus (Most Bountiful God) 44).

The word “assumption” is rooted in the Latin verb assumere, which means “to take to oneself.” The doctrine of Mary’s Assumption teaches that Jesus took his mother to Himself in Heaven at the end of her life, just as Enoch and Elijah had been taken up body and soul to Heaven at the end of their lives (Genesis 5:24; 2 Kings 2:11).

In discussing Mary’s Assumption, the Catholic Church teaches that Mary’s body was glorified immediately at the end of her earthly life. Thus, unlike other mortal beings who must wait until the end of the world for our bodily resurrection, Mary, as Jesus’s mother, was given the divine gift of being taken body and soul to Heaven upon her death.

Importantly, the Assumption of Mary is unlike the Ascension of Jesus. Jesus Christ ascended into Heaven by His own power. In contrast, Mary is believed to have been taken up into Heaven by God.

Origins of this Belief

Although Scripture does not explicitly mention the Assumption of Mary—also called the “Dormition of Mary” in the Eastern Churches—Catholic clergy and laypeople alike have believed in Mary’s Assumption since the earliest centuries of Christianity. Pope John Paul II observed that the earliest references to Mary’s Assumption date to the second and third centuries, and that a long tradition of iconography exists showing Mary entering Heaven with her body.

Another ancient reference to the Assumption of Mary is found in the 8th century writings of St. John of Damascus. There, St. John recorded that the Roman Emperor Marcian had requested possession of Mary’s body. St. Juvenal, who was the Bishop of Jerusalem at the time, replied “that Mary died in the presence of all the Apostles, but that her tomb, when opened upon the request of St. Thomas, was found empty; wherefrom the Apostles concluded that the body was taken up to Heaven.”

The Assumption of Mary remained a widely-held belief throughout the centuries until it was officially made part of the Catholic Church’s teachings by Pope Pius XII in 1950.

Scriptural Basis Underlying the Doctrine of the Assumption of Mary

The Bible itself asserts that “Jesus did many other things as well. If every one of them were written down…even the whole world would not have room for the books that would be written” (John 21:25). Thus, although Scripture doesn’t record Mary’s death or her Assumption, the Catholic Church teaches that Scripture provides a basis for the centuries-old belief in Mary’s Assumption.

Notably, the Catholic Church sees proof of the Assumption in the Bible’s emphasis on Mary’s perfect union with Jesus’s destiny as the Savior. Mary’s perfect union with the Redeemer’s destiny is evident from the birth of Jesus to after His death, as seen in: Mary’s miraculous conception of Jesus, Mary’s prompting of Jesus during His first miracle at Cana, Mary’s witness to her Son’s crucifixion, and Mary’s presence at Pentecost after Jesus’s death. Accordingly, the Catholic Church reasons that Mary’s union with Jesus requires a continuation after death, meaning that as Jesus entered Heaven with his body and soul, so did His mother.

The Catholic Church cites several Scriptural passages as further evidence of the Assumption of Mary, including these seven passages:

1. The promise in Genesis 3:15 and 1 Corinthians 15 that the offspring of Eve will crush Satan (or death). Jesus, as the New Adam, Resurrected and Ascended into Heaven as the final signs of this prophesized victory over death. In a similar fashion, Mary, as the New Eve who shared this enmity with Satan, was also taken body and soul into Heaven to fulfil the prophesy that “Death has been swallowed up in victory.”

3. The listing of the Ark of the Covenant’s contents as: the manna (bread from Heaven), Aaron’s staff (symbolizing Israel’s high priesthood), and the tablets containing the Ten Commandments (the Word of God) (Hebrews 9:4). Correspondingly, Mary is the New Ark who carried Jesus, who is the real bread from Heaven, the high priest of the New Covenant, and the incarnate Word of God.

4. Psalm 132:8, which says: “Arise, Lord, and come to your resting place, you and the ark of your might.” Since the Church considers Mary to be the New Covenant Ark, it believes that she was taken into Heaven in the same manner as Jesus, body and soul.

5. Psalm 45:9’s description of a queen or “royal bride,” sitting at the King’s right hand.

6. Chapter 12 of Revelation, which the Catholic Church believes refers to Mary as the woman clothed with the sun, with the moon under her feet, and a crown on her head.

7. The universal Christian belief that we will all be raised in a glorious form one day, be “caught up together…to meet the Lord in the air,” and made immaculate to be with the Lord forever (1 Thessalonians 4:17; Revelation 21:27). Since Mary was the first person to say “yes” to the Good News of Jesus (Luke 1:38) and maintained her devotion to Christ even after His death and Resurrection, she’s seen as the perfect role model for Christians. As this ideal example of discipleship, Catholics believe that Mary received early the promised blessing of bodily resurrection that all Christians will be given one day.

Dolores Smyth writes about faith and parenting. Her work has appeared in numerous print and online publications. You can follow her work on Twitter @LolaWordSmyth.